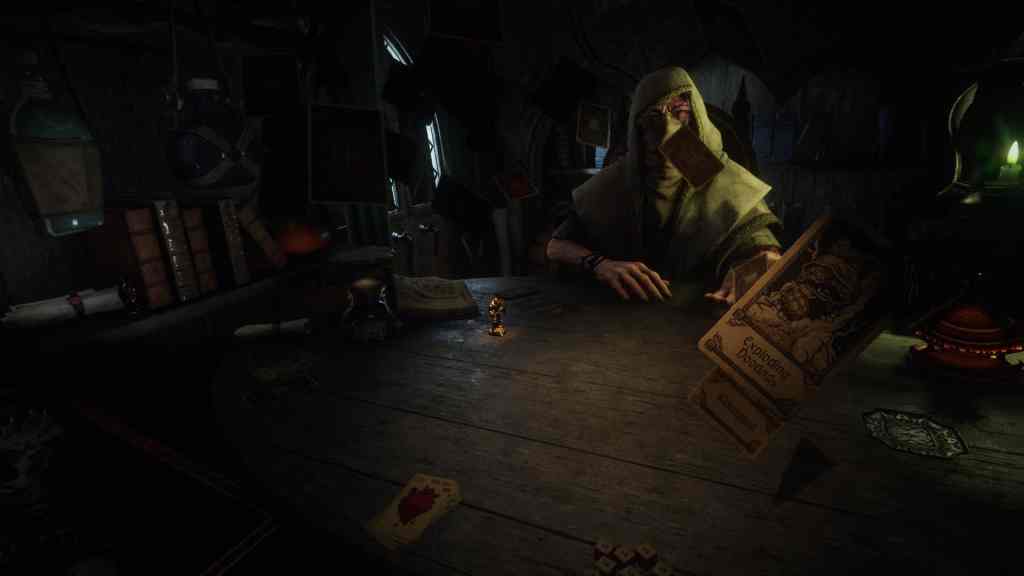 Hand of Fate was an excellent game in many ways. An interesting blend of card game, mystery, action and puzzler. It never should have worked, but it did. It was also one of my favorite games the year that it released. I found myself wondering how great it would be with a little more polish and a little more flair. Two years later we found out exactly how great that would be, as Hand of Fate 2 delivers everything I had hoped for in a sequel.

Defiant Development has done a wonderful job building on the core concepts of the original, fleshing them out and adding more meat to the bones of the sequel. I sometimes wonder if I am making the correct interpretation of the design choices that dev teams make, but with Hand of Fate 2 it felt like Defiant Development read my wish list of things I hoped to see improve or change in the sequel.

It’s In The Cards

At the heart of the game is the dealer concept. You, the player, are trapped in a game of chance and luck with the Dealer. Over the course of the game you draw your hand of cards, then set about working through different areas. These areas are represented by randomly dealt cards from the dealer’s deck. You can run into any kind of situation, involving battles or tricky situations that will require you to make risky choices. You can also be accompanied by a companion, a useful ally to have while engaging in many of the game’s fights.

With over twenty missions in total, that can take on various forms due to the random nature of the deck dealing, the game manages to pull off the feat of being engaging on the first playthrough while offering great replayability as well. As you move across the table, one card at a time, you are constantly forced to choose between exploring more and possibly finding something that will benefit you, or rushing towards the end of the mission to avoid potential pitfalls.

The game can be difficult in its later stages, and sometimes the fall of the cards is cruel indeed, but frankly I had no issue with this as it largely ties into the theme of the game anyway. Restarting a long mission after being cut down in a hectic battle can be harsh, but I always found myself restarting the mission in short order. While the game can be cruel, at times, I never found it frustrating.

One of the main areas of the game that has received some reworking, compared to the original, is the combat. It now leans closer than ever to the contextual fighting systems that inspired it. The influence of the Batman Arkham series is even more obvious, and the game benefits greatly from these changes. The bad camera, the sometimes rough controls and the occasional frustrating interactions between player and enemies of the original are all gone. In their place is a system that, while not deep, is smooth and rewarding. Most of all, it’s fun. Bashing people with a variety of weapons, using allies to help you, and whipping around the combat areas duffing up bad guys feels great.

Different weapons provide different benefits and will perform differently against certain types of enemies. Some may be weak to blades, while others will take more damage from clubs. Having the right weapon at the right time can be important, but in a game based on luck this is not always guaranteed. It is, in many ways, similar to games such as The Binding of Isaac. Experience will mean you quickly spot a “lucky run” as you pick up certain items early and it’s a great feeling. Despite the random nature of the game, it still allows you to have faith in your game knowledge, and in this way it never makes the mistake of undercutting players who want to learn how to play the game as well as they can, instead of just being along for the ride.

The real strength of this series is the Dealer. Good games have good antagonists, and the Dealer is one of my favourite in recent years. An interesting mix of know-it-all smarm and quiet desperation, he is voiced with aplomb by Anthony Skordi. It really is hard to describe exactly how much his performance brings to the game, setting a wonderful tone, and bringing together all the different elements of gameplay and atmosphere into a cohesive unit.

If the original Hand of Fate was a game that I loved despite its flaws, then Hand of Fate 2 feels like a well-deserved payoff for that love. Yes, the game can be challenging at times, and bad luck is a thing that can cost you a play-through…it just seems slightly trite to hold these against the game when that is exactly how it is advertised.

Hand of Fate 2 didn’t just satisfy my desire for a follow up, it started a deep longing for a third game in the series. If the developers keep polishing the concept from title to title in this fashion, there is a good chance that I would never get tired of the premise.