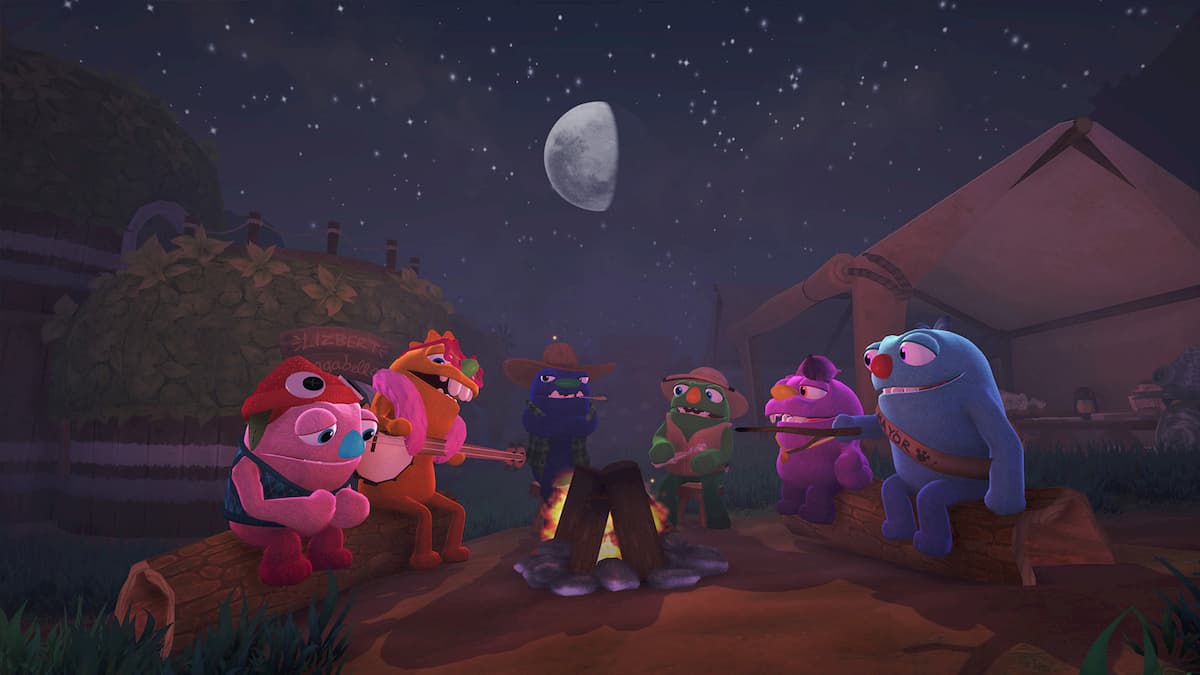 We have been very excited about Bugsnax, there is no point in lying about it. In a busy time of the year, packed with a lot of great games, something about Bugsnax stood out. The cute art, fun characters, and the seemingly peaceful exercise of catching tasty treats felt like a nice contrast to games about sticking swords in monster faces, shooty men shooting things, and superheroes super punching stuff. All those games are great, but sometimes we want something different. And Bugsnax is definitely different.

In Bugsnax, you play a nameless protagonist who will most often be referred to as Buddy. You’re a journalist with a hot scoop after receiving a film from a somewhat infamous explorer called Lizbert Megafig. She is well known for finding strange things, and she claims to have found a wonderful island that you should really check out. You head off to investigate, convinced that this is a big story, despite the protests of your editor.

When you arrive, everything is going to hell. Lizbert is missing, and the people who lived in the town are scattered and fighting with each other. People are starving because they don’t have the skills to catch the Bugsnax that they have been surviving on. Lizbert acted as mother, provider, and protector, and since she went missing everything has taken a turn for the worst.

You quickly establish yourself as a capable Bugsnack hunter, and before you know it you are working to find out what happened to Lizbert, to bring all the townsfolk back together, and to discover what Bugsnax actually are. These strange creatures are part insect, part food, and fully delicious. When somebody eats one, a part of them will turn into the Bugsnack, which seems odd, but nobody seems to mind.

Truthfully, we simply didn’t expect much from the story and figured Bugsnax would be all about catching those bugs. We were very, very wrong. The characters are well written, and the voice cast does a superb job bringing them all to life. Their individual quirks, tales, and histories are all fun and engaging. You will learn a lot about all the different characters by interviewing them. If you can convince someone to return to Snaxburg, the main town, they will give you an interview and some form of a clue about Lizbert.

Watching their relationships develop from a fractured group that holds a lot of resentment to an actual community with the same goals is fun and rewarding, and the story is at times heartbreaking, heartwarming, or hilarious. As you progress through the game, doing missions for NPCs and feeding them Bugsnax, you will grow to like them all, and it is a great feeling when you manage to rebuild their social circle. There are also plenty of surprises along the way, adding some spice to the tale.

The real meat of the game, and what you will spend most of your time doing, is figuring out how to capture the 100 different Bugsnax that call the island home. As you play through the story you will unlock different tools that you will need to catch various types of Bugsnax. Traps, bounce pads, and grappling guns are all in your future, and each one will give you a new way to catch those tasty treats. Sometimes your tools are enough, but there are plenty of Bugsnack interactions you will also need to discover. How to melt them, how to stop them from burning, how to deal with cheeky little ones that don’t seem to fall for any tricks. It’s great fun figuring out how to catch them, then coming up with more efficient ways to do it.

Bugsnax come in a range of sizes and types. Some freeze you, some will burn you, some are so fast you can’t catch them by normal means. Others will require multiple steps to catch, and some can only be caught at certain times of the day. It’s never demanding or demeaning to the player, balancing perfectly between giving you a fun challenge and getting you thinking.

The island itself is broken up into different areas, each one acting as a biome with a different climate, and home to a unique range of Bugsnax. Each area also contains one of the characters you need to convince to go home to Snaxburg. If you manage to do some jobs for each of them, you can get them all back to where they belong. It all plays out at a nice pace, giving you something to do without interfering with your Bugsnax hunting. These quests also give you a reason to explore those important interactions that you will need to master to catch some tasty critters.

Bugsnax does a great job of building a fairly simple set of interaction mechanics, then mixing and matching them across all the different creatures. The different environments mix things up nicely, as you won’t have access to a particular source of heat or cold that you relied on to catch a certain type of Bugsnack elsewhere in the game, and will need to get creative to find success.

Bugsnax is close to perfect. We ran into a couple of framerate issues on PlayStation 4, and we did find a few of the bad kind of bugs, some of them being reasonably severe. That is the only reason this game doesn’t get a 10 out 10. Hopefully, those will be sorted by launch day, and we will look like idiots for not giving a perfect game a perfect score.

The art, characters, writing, voice work, mechanics, and everything else combines to make a beautiful gaming experience. The design of this game has been considered from every angle, with any spare fat trimmed away, leaving an experience that is rewarding and fun but also touching in a way that we simply were not expecting. Bugsnax should also appeal to young and old alike, offering jokes about poop and jokes about complex topics like infinite regress, but never going overboard in either direction.

We enjoyed our time with Bugsnax so much that a great malaise settled upon us when we had finished playing through the game’s incredible ending. Will we get a Bugsnax 2? We certainly hope so. Do we even deserve a Bugsnax 2? Maybe if we are very good people, and live our best lives.