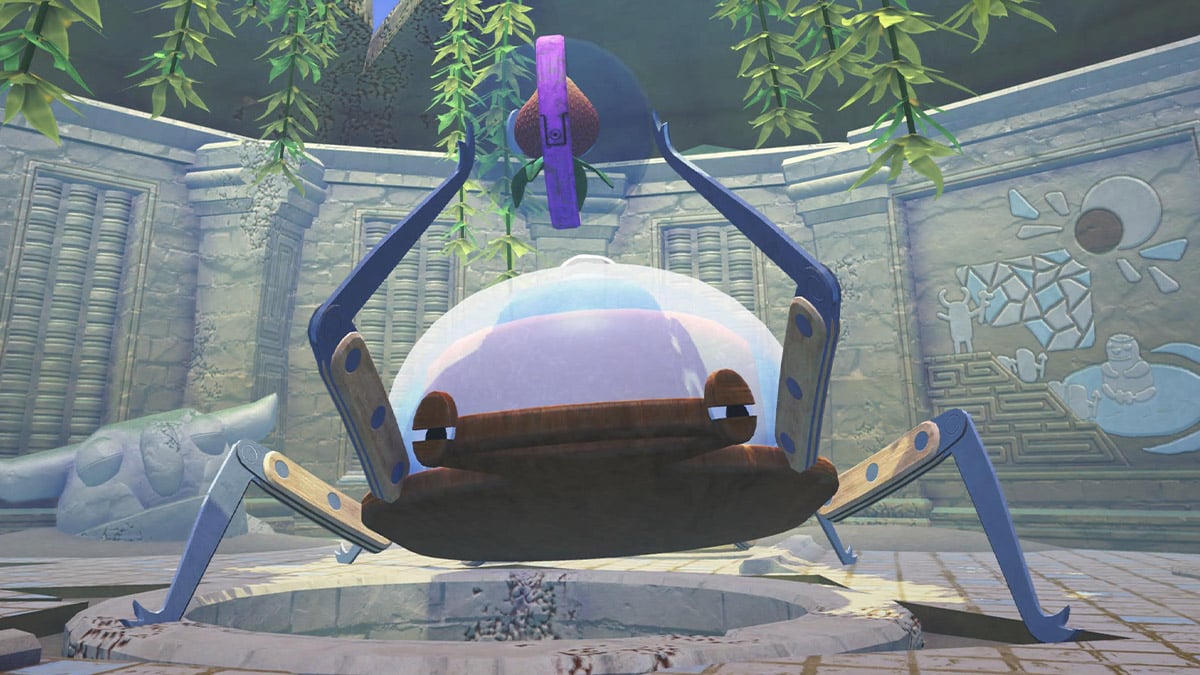 An island has emerged from the sea off the coast of Snaktooth Island, toward which an expedition of grumpuses from the neighboring village of Snaxburg has set out to discover its secrets. Once there, these grumpuses find that the Bugsnax of Broken Tooth Island, otherwise known as Bigsnax, have grown exponentially in size compared to those of Snaktooth. With the added size comes a layer of added difficulty for anyone interested in their capture.

The first of the Bigsnax that players will encounter on Broken Tooth, Bunger Royale takes after its smaller counterpart in that it repels the Snak Trap. Once made small with a nearby jar of Shrink Spice, however, it can be led into a Trip Shot coated with ketchup and scooped up with the net.

Related: How to sail to Broken Tooth in Bugsnax Isle of Bigsnax DLC

To the right of the Bunger Royale’s domain, the player can find a Buggy Ball tunnel that they can loop Sprout the Strabby through. Upon doing so, a Cheddorb will burst through the wall, continuing to roll in a circle around the central crater, crashing through any walls in its path. Agile players can snag a jar of Shrink Spice and chase it down, after which a Trip Shot can be placed in the smaller Cheddorb’s path.

Millimochi, existing in trains of three, are frozen to the touch, and will try to aggressively freeze the player if within range. While it will attempt to interrupt the usage of a Trip Shot to spread fire from flare to flare, this fire is exactly what it takes to unfreeze the Millimochi. Contact with fire, in combination with some Shrink Spice and the aggression of another Bigsnax, will allow players to scoop up all three with their net.

The arachnid Spaghider hangs from the canopy of overhanging trees, waiting to grapple up its cheese-coated prey from above. It will also grapple a jar of Shrink Spice to itself if the jar is first covered in cheese, where it can be pulled from the tree and captured using the Snakgrappler.

Trampoline-weilding Clawbsteroni can be jumped on and used as platforming tools while exploring Broken Tooth. Should the player manage to sneak Shrink Spice under the trampoline, the much smaller Clawbsteroni will attempt to run, but will eventually fall into a simple Snak Trap once cornered.

The constantly-airborne Tikkada Masala hovers over its next within Broken Tooth’s crater, flying between stone pillars that can be used to set up Trip Shots in its path. However, the player must first lob a jar of Shrink Spice up to it, or else its much larger variant will barrel through all traps unharmed.

This pie-shaped creature roams Broken Tooth’s inner temple, concealed in a Tupperware shell that protects it from incoming Shrink Spice. A Snakgrappler can be used to pluck the four plastic tabs located around its diameter, removing the lid and leaving it vulnerable.

Related: How to find the secret Triplicate Space area in Bugsnax Isle of Bigsnax DLC

This lanky behemoth has very few defenses against its capture, save for an aversion to Snak Traps. A single dose of Shrink Spice is enough to leave Cellystix nettable after becoming entangled within a Trip Shot.

Five Chocolants will spawn when a Cellystix is made small. These can also be reduced in size by Shrink Spice, where they will hustle into peanut butter or chocolate-covered Trip Traps.

This large, flying Eggler variant will emerge from large Eggler eggs once they are cracked by the statue at the center of Broken Tooth’s crater. Beyond the effects of Shrink Spice, the flaming Deviled Eggler must be extinguished, which can be easily accomplished by spraying a nearby Millimochi with hot sauce and having the two collide.

The boss of Broken Tooth, this hulking, walking charcuterie board must first have its airtight glass lid broken before it can come under the effects of Shrink Spice. Launching Cheddorbs from the conveniently-placed catapults around the boss’s arena, players can eventually reduce it to something small enough to be caught in a net.

Related: How to catch the Cheddaboardle Rex in Bugsnax Isle of Bigsnax DLC

While neither a Bigsnak nor a creature of Broken Tooth, this new Bugsnak can be found in the Triplicate Space, after solving a handful of puzzles.

Related: How to catch a Cappuceetle in Bugsnax Isle of Bigsnax DLC