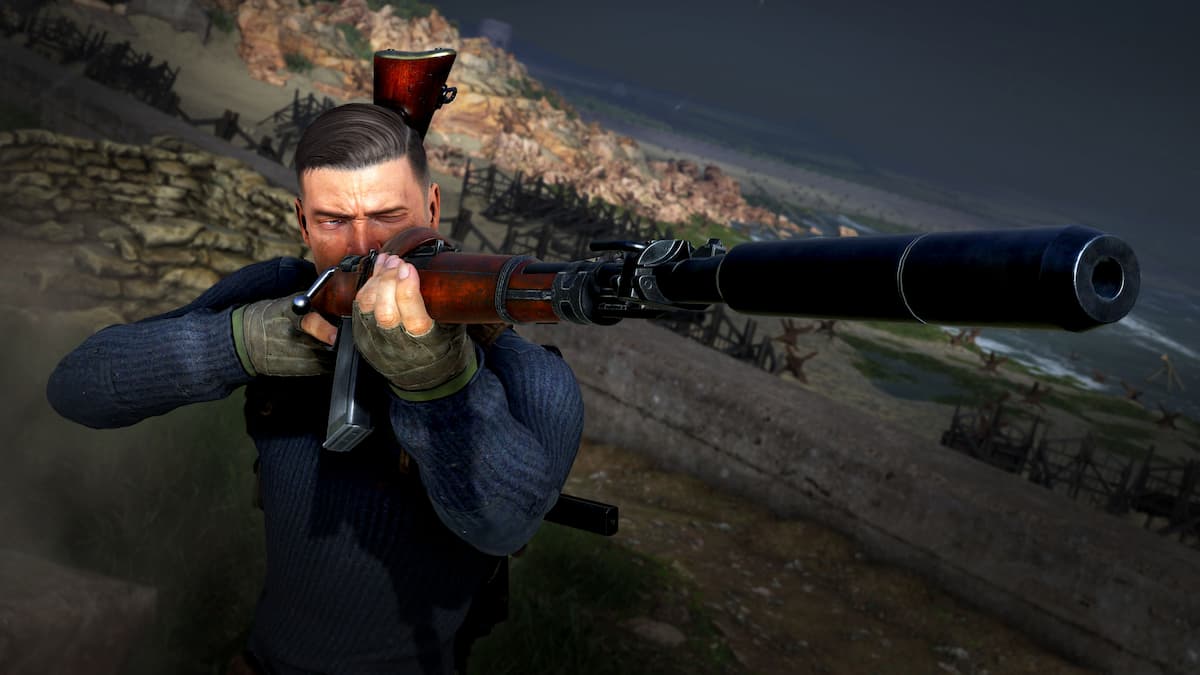 Even if, like me, you haven’t played these games before, nothing in Sniper Elite 5 will surprise you. Once again, Karl Fairburne tears ass as a one-man army through Nazi strongholds. Once again, he shreds bodies in slow motion with powerful bullets. The new features here, invasions and massive maps that encourage multiple approaches, are expansions rather than revolutions. All this makes this game rather difficult to review, even as a newcomer. If you like these games, or even this kind of game, and want more of it, Sniper Elite 5 is worth checking out. This though, feels obvious. Rebellion Games has been quietly refining this formula for 10 years. The studio found an enthusiastic audience, among whom are other writers at this very site. You already likely know if you are interested in this game.

Fortunately, it has more than enough virtues to slake your thirst. All of Sniper Elite 5’s verbs are familiar, but all of them are pulled off with sleek confidence. Draw guards with a whistle or a distraction, then slit their throats. Make a difficult shot from far away. Fight your way out of a jam after getting caught. Find the perfect sniper nest to kill your target. These are all regular video game thrills, but it’s hard to argue with how capable they are here.

Deep breath in, slow breath out

Sniper Elite’s gestures at simulation can make the stealth-action truly exhilarating. For example, loud sounds can mask gunshots and you can even sabotage cars or generators to cover a firefight or a flurry of sniper shots. Timing a headshot just as a plane moves overhead or artillery fires, masking your presence from the soldiers around you, never gets boring. These simulation elements only get more intense in higher difficulty settings, to the point where the game significantly changes with those shifts. The systems are dense enough that they beg for re-visitation or tinkering. Though the game will take a dozen or so hours on a straight run through, you could play it for a long time.

Each map is truly massive. There’s an excitement towards moving through the entirety of a small town or plot of countryside that feels new. It also does help that, despite their size, these are deliberately designed levels. They have specific entry and exit points, tactics they encourage and discourage. At least at first blush, Sniper Elite 5 pulls off a pretty marvelous trick. It expands small levels to something closer to an open world, without losing strong direction and design in the process. Perhaps in repetition, these levels would lose their sheen, but they make an effective first impression.

They are also meant to be repeated. Playing levels can unlock new starting locations, and returning with additional tools can reveal new possibilities. This structure conjures another prominent stealth/action franchise: Hitman. The comparison is both flattering and flattening. Incentivizing moving through a level in new ways on higher difficulties is obviously fun. Sniper Elite is robust enough to make such revisitations rewarding. Hitman, though, has a distinct tone and character. Sniper Elite’s aesthetic language is, in contrast, limiting.

A smattering of German

It would be silly to say that anyone plays Hitman for its plot. Yet, the writing is a key element of its charms. Its high key social satire is as sharp as it is silly. The fantasy is also crystal clear. Agent 47 can move through and around class boundaries, killing those attempting to transcend their wealth. Karl Fairburne has no such hook. He’s another serious soldier in a video game. Sniper Elite 5’s tone, though often absurd and exaggerated, still plays in a kind of stoic wartime aesthetic. The plot is similarly predictable: Fairburne kills his way through a fictional Nazi conspiracy. It’s all pretty rote material, and fortunately it is not played too self-seriously. Nevertheless, it feels a bit hollow. The approach to WWII is simultaneously self-aware and dull.

There are some political statements made. The French resistance is diverse, while the Nazi army is a sea of pathetic Aryans. However, these gestures are superficial, rather than incisive. The game also consistently portrays Nazis as buffoons. They are cartoon villains, rather than real- world monsters, hardly even grounded in the real-world violence they wrought. It would, of course, be silly to ask for seriousness in a game called Sniper Elite. But a little dark, humorous edge would go a long way and would perhaps make the game’s politics more than vaguely anti-authoritarian.

What Sniper Elite has on Hitman, however, depending on your taste for it, is in the systematic nuts and bolts. The emphasis on combat, rather than an interlocking social puzzle, means that there are fewer fixed solutions. It still has all the hard limits of video game simulation. Ultimately you still win by sneakily shooting people. None of these games are as wild open as their marketing suggests. Nevertheless, it is cool to watch a situation shift from in control to out of hand or to stealthy pull off a tricky shot. The game also emphasizes the validity of each approach. The game pulls up no grades (outside of three stars that depend on the completion of objectives) after a mission, rather using a set of statistics to characterize your approach. It’s up to you whether you want to take that as criticism or encouragement.

In addition to the aforementioned revisitations, there are plenty of ways to spice up the game with multiplayer. There’s crossplay co-op, likely a fun way to shoot the shit with a friend. There’s a feature called Axis Invasion, where players interested in some PvP can suddenly be visited by hostile player snipers. Personally, I found it frustrating to be constantly interrupted. Unlike Dark Souls, there is no risk/reward way to open yourself up to invasions. Rather, there’s a switch in the options that turns the feature on or off. However, if you are skilled enough and go in, prepared to be interrupted by a player-controlled wild card, the potential excitement is self-explanatory. Additionally, there are survival and more traditional PvP modes.

With the numerous modes in mind, Sniper Elite 5 can feel too stuffed. I haven’t even mentioned the density of ribbons and medals Karl can earn for every conceivable action. A multitude of DLC is already on the way. Each weapon has dozens of possible permutations, with customizable attachments and loadouts. If you can look past that noise, a set of capable fundamentals awaits. Your enjoyment of Sniper Elite 5 likely depends on how much joy you receive from those fundamentals. Sniper Elite can be rote or obvious, but it’s confident and well-rounded. It would be a mistake to underestimate that.