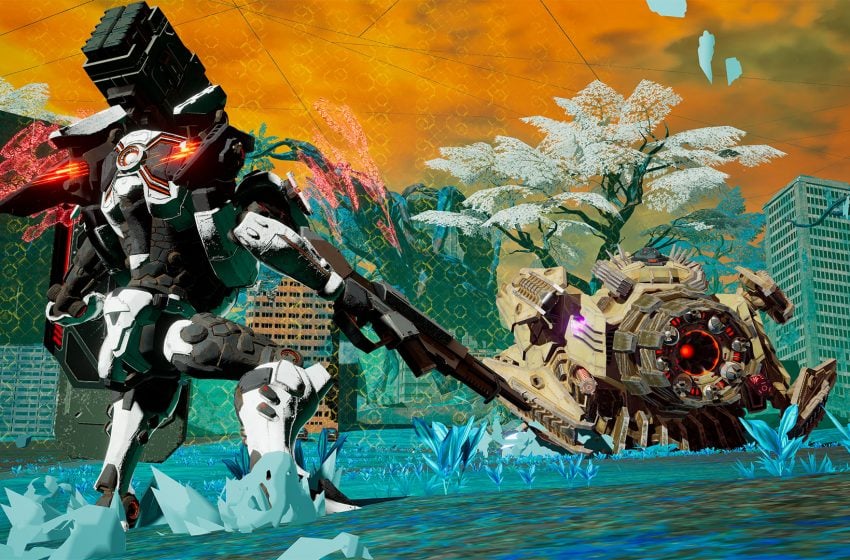 Daemon X Machina, by Marvelous Games, brings a healthy dose of Mech action to the Nintendo Switch. The game brings with it genre veteran Kenichiro Tsukuda. Many fans should recognize him from the Armored Core series, which means many should expect good things from this game.

In Daemon X Machina you play the part of a mercenary who pilots the Arsenal Mech in battle, taking on hordes of enemies A.Is. As you would expect, the Arsenal is bristling with weapons. But the game also brings some welcome features that mean you are not necessarily tied down by your loadout.

Daemon X Machina contains a plethora of weapons that you can unlock by either paying for them with your earnings from missions, or by scavenging the wreckage of enemy mechs. Get the better of an enemy mech pilot, and you can sift through the debris to take away one piece of armor or a weapon. This feature is excellent, as each victory results in a trophy that can become a powerful upgrade to your Arsenal. You can also switch weapons mid-fight, should the nature of the threat you are facing change, and you need to alter your tactics to survive.

Each new weapon and piece of armor also changes how your mech looks. There are a whole host of aesthetic options available, meaning you can apply paint and deals to your Arsenal to result in a truly unique look. Four-player co-op means you want to look as fancy as possible while you take on the Immortal threat with either friends or internet strangers.

Mecha games live and die by their combat. The entire hook is that you get to pilot a giant mech, and if it doesn’t feel right, then the game won’t be able to draw people to it. Fortunately, combat in Daemon X Machina is gratifying. You can put enough weapons in your loadout to have genuine variety in your offensive abilities. You can opt to go for anything from giant shields and swords to twin assault rifles, backed up by shoulder-mounted rockets, and even more, weapons hanging off your pylons. In case you need them.

Building your mech in the Hangar is fun in and of itself, as armors all have different bonuses. They also demand more power, so balancing is key. Once you start fighting, the game does an excellent job of throwing a range of threats at you, both in the air and on the ground. The A.I takes the form of turrets, tanks, and hovering aircraft, and are often be backed up by other mechs.

Fighting these is a joy, as you both zip through the air, desperately trying to put as much damage into your foe and dodging all the incoming fire. A stamina bar for your thrust adds a tactical level to how you move. The thrust makes far more sense to try and break up a map and take on a limited number of threats at a time, so you don’t leave yourself exposed to incoming fire. You can also run on the ground, and dash along using your thrusters for extra speed. I was slightly worried about how effective I would be at a shooter using a controller because it has been a while. But Daemon X Machina toes a perfect line between balancing the need to be skilled and the need for the game to be forgiving to feel genuinely engrossing. As such, you can lean into improving the lock-on abilities of your Arsenal if you need to, and fully customizable controls back up the developers intend to make this game approachable for everyone.

Combat can also be surprisingly deep, as you need to balance your Arsenal abilities and use clever tactics to get the upper hand against enemies. Another element I can honestly say I wasn’t expecting was some pretty solid environmental destruction. It feels great to throw a volley of missiles at an enemy mech, have them dodge the onslaught, and watch as the building behind them crumbles.

Story-wise, I have to say I am interested in what I have learned so far. The game’s story is held up by a colorful cast of fellow mercenaries, people driven to risk their lives in combat for their reasons. Some proudly wish to defend their homes, while others seek glory and fame. Some are driven by less obvious motives, and as the game goes on, there seems to be some serious political maneuvering between the different mercenary groups.

It is all as beautifully out-there as you would hope from a game about giant robot fights. After a moon collapses into the planet, Artificial Intelligences turn rogue, attacking humans. On top of that, the enormous Immortal enemies, hulking titans that dwarf your Arsenal mech, can show up in fights, presenting a stiff challenge. None of this makes sense to me, but I never need it to. It just needs to happen so I can shoot enemy robots.

It’s been a good time for Nintendo Switch owners, with games like Fire Emblem: Three Houses, and Astral Chain having released with others like Pokemon Sword and Shield and Link’s Awakening on the horizon. Right in the middle of them all, I may have just found my favorite game in quite a while, as the focused combat and in-depth min/maxing of builds is scratching an itch I almost forgot I had.