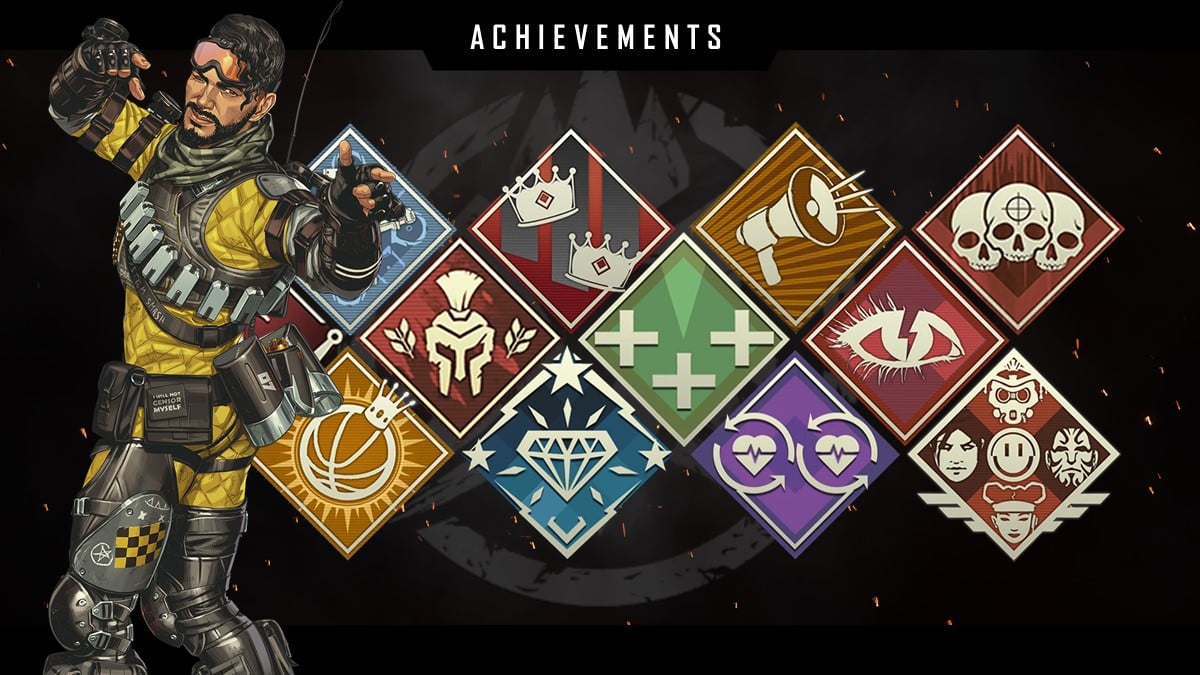 For Apex Legends, there are 12 possible achievements, different from the in-game challenges or badges, and are applied to whichever account or platform you are playing on. Steam, Origin, Playstation, and Xbox, all have the same 12 achievements (also called trophies in PlayStation).

Achievements are each represented by an asset that is also used as a badge asset in-game, but the challenges are not the same as the in-game badge challenges, even if they have the same picture (and sometimes even the same name). It is important to note that achievements, in most cases, are much easier to get than their in-game doppelgangers. Here are all 12 achievements in Apex Legends.

Note: All of these achievements are for Battle Royale mode, not Arenas.

This achievement will happen eventually; it’s not really worth actively going for. If you have unlocked this achievement on Origin and log in on Steam, or vice versa, you will gain the achievement on the other respective PC platform as well. This is the only achievement where this is the case, and you will still have to grind for it again switch between consoles or between PC and console.

Equip a legendary Helmet and Body Armor at the same time.

Legendary gear is found in hot drops, loot vaults, care packages, and select high-tier sub locations. Loba is a great character to hunt these pieces down, as she can steal items from locked locations.

This doesn’t mean kit out a normal weapon; this means pick up a weapon that is pre-kitted for you. You can find these in hot drop locations or high-tier loot sublocations such as Oasis Café or Reverie Lounge.

Be the Jumpmaster 5 times.

When you leave the dropship, you just have to be the ‘Jumpmaster’ that takes your team to the drop location. Do it five times, that’s it.

You only start the game with 6 Legends, so you will have to unlock two locked characters before getting this achievement. You can track your damage with your stat trackers on the banner customization screen for each Legend, even if you haven’t purchased that specific tracker.

Being the Kill Leader means that you have the most kills of anyone in the match you are playing, and your kill count is at least three. You do not have to end the game as the Kill Leader to get this achievement; you just must hit it at some point.

Win a game as an offensive character.

This means winning a match where you are Wraith, Bangalore, Mirage, Octane, Revenant, Horizon, or Fuse.

Win a game as a defensive character.

This means winning a match where you are Gibraltar, Caustic, Wattson, or Rampart.

Win a game as a support character.

This means winning a match where you are Lifeline or Loba.

Win a game as a recon character.

This means winning a match where you are Bloodhound, Pathfinder, Crypto, or Valkyrie.

Win a game with 8 different Legends.

Like with Well-Rounded, you will have to unlock at least two Legends to unlock this achievement. It is most likely objectively the most difficult achievement to unlock, but still is much easier than many of the in-game badge challenges.