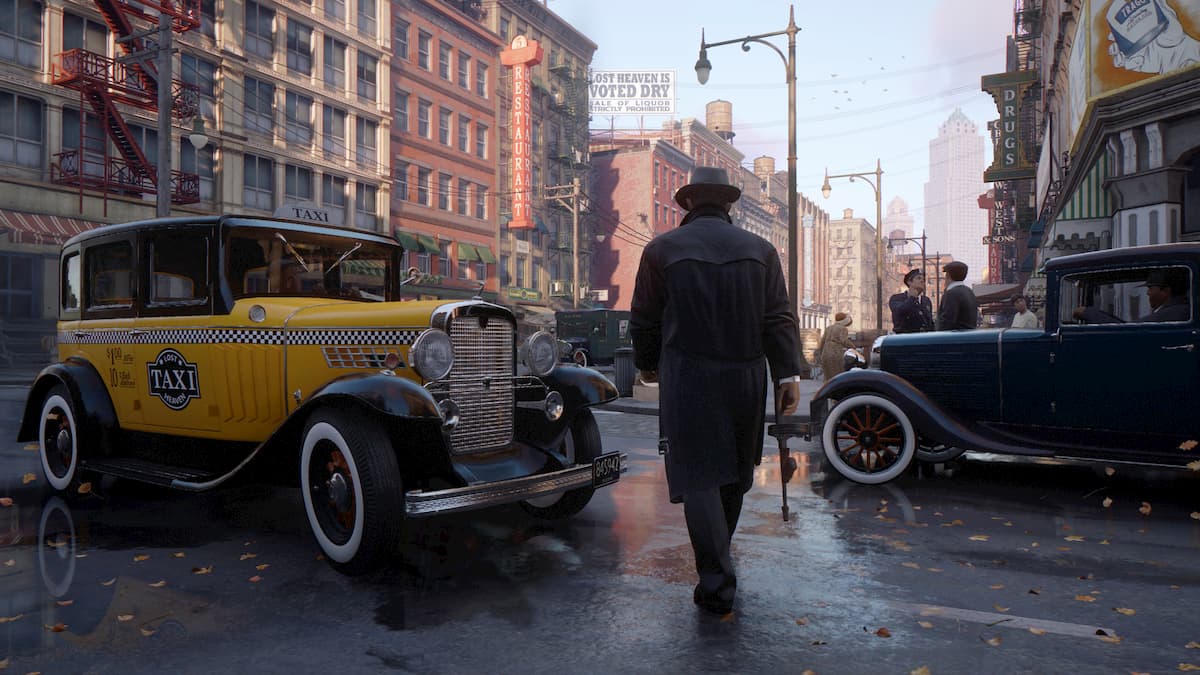 Collecting all of the Dime Detective magazines in Mafia: Definitive Edition is undoubtedly a painful task. Each of the 20 collectibles is spread far out from common areas, and they definitely will put some miles on your vehicle. Players will need to collect a good portion of these in the story mode, as some locations cannot be unlocked until you reach certain chapters. To make it easier to track your progress, we have listed each location under the issue name and number.

Travel to St. Peter’s Docks on the south end of Central Island. You’ll want to walk up the stairs of the house that’s next to the water. You will spot the collectible sitting on a gray table.

This Dime Detective is only obtainable within Chapter 19 when Tommy is inside North Park’s Grand Imperial Bank. Head to the second floor and go into the first room on the left. You’ll see the issue near the window.

In the middle of the Oakwood district, one road comes at a dead end. On this street, go into the last home on the left. In the living room, there’s a magazine on the coffee table.

In the heart of Central Island, there is an underground parking garage. In the garage, there will be a ticket booth to the left of the entrance. The fourth issue is on a big wooden desk.

5. The Corpse That Wasn’t There

At the northern end of Central Island, go to the top level of the Lost Heaven State Prison. In the corner, there’s a gigantic switch you will need to pull down to open the cells. Afterward, head into the fourth cell down and the magazine will be on the floor.

This is a cakewalk. Step into Biff’s place in Chinatown (a location mentioned on the map). Walk past Biff and into a hallway with a couch. The Dime Detective sits on this piece of furniture.

This issue can only be found during Chapter 14: Happy Birthday, as you are on a ship that cannot be found on the map. Even if you’ve already played through the section, you can replay it in Chapter Select in the main menu. When you are on the ship, take the stairs up to the top-deck. Walk over to the one side with three barrels standing alone, and the magazine will be nearby.

8. You’re the Crime in My Coffee

You can find this magazine by going into the biggest home in the Beech Hill district. Inside, there is a library in the back of the home. Near the shelves to the left, there is a silver cart with the collectible on top.

9. Death Blows Out of Candles

South of Old Crow Pond is a fairground. One section of it will have an array of white small huts. The one closest to the middle will hold this ninth issue.

10. A Horse of Another Killer

Near Saint Paul Coast, in the Downtown district, there is a large diner with several tables inside. Walk over to the table closest to the bar where a magazine lies.

This location is pretty far from the city, but the location is part of Chapter 9, if you want to kill two birds with one stone. The eleventh issue will be in a barn west of Durham Pond and Heaven’s Peak. On the right side of the building is a back room, and the magazine will be on a barren shelf.

You will discover this when searching around Clark’s Motel. You can navigate to the hotel by looking at the top-right of the in-game map. Once you arrive, go to the backyard by taking the path on the right. You should see the magazine lying on a stack of wood in front of you.

Go to Hotel Corleone in the Downtown district. After you enter through the main entrance, take the door on the far right next to the stairs. Go through the concierge’s workspace and step into the manager’s office. This issue is laying on his desk in the back.

The fourteenth issue will be at the Salieri’s Bar, which is north of Works Quarter. Go to the armory room above the garage. The collectible is on a workbench in the back of the room.

The second and last magazine in the Lost Heaven State Prison is outside of the Guard Tower. Instead of going inside, take a door behind you that reads “leave us.” On the right, there is a bench with the issue there.

This piece of literature is in the Works Quarter’s Federal Customs Impound. This is highlighted on the map in the bottom left. On the second floor, there is an office with a handful of desks and typewriters. The one closest to the window has the collectible on it.

At the airport, east of the North River, there’s a hangar with a number of planes inside. Behind one plane are two cars and a few crates. This magazine sits on one of these crates.

Go to Downtown’s St. Michael Church. Walk down the aisle and you’ll see a painting of Christ on top of a cabinet. The eighteenth issue will be alongside the painting.

In Downtown’s Hotel Corleone, go to the highest floor and head into one of the rooms with an open window. From here, you can get on the rooftops. The collectible will be on a white patio table with numerous beer bottles on it.

This one will be in between Little Italy and West River Tunnel near a red and white mobile home. The issue will be on top of a wooden crate next to the front door.