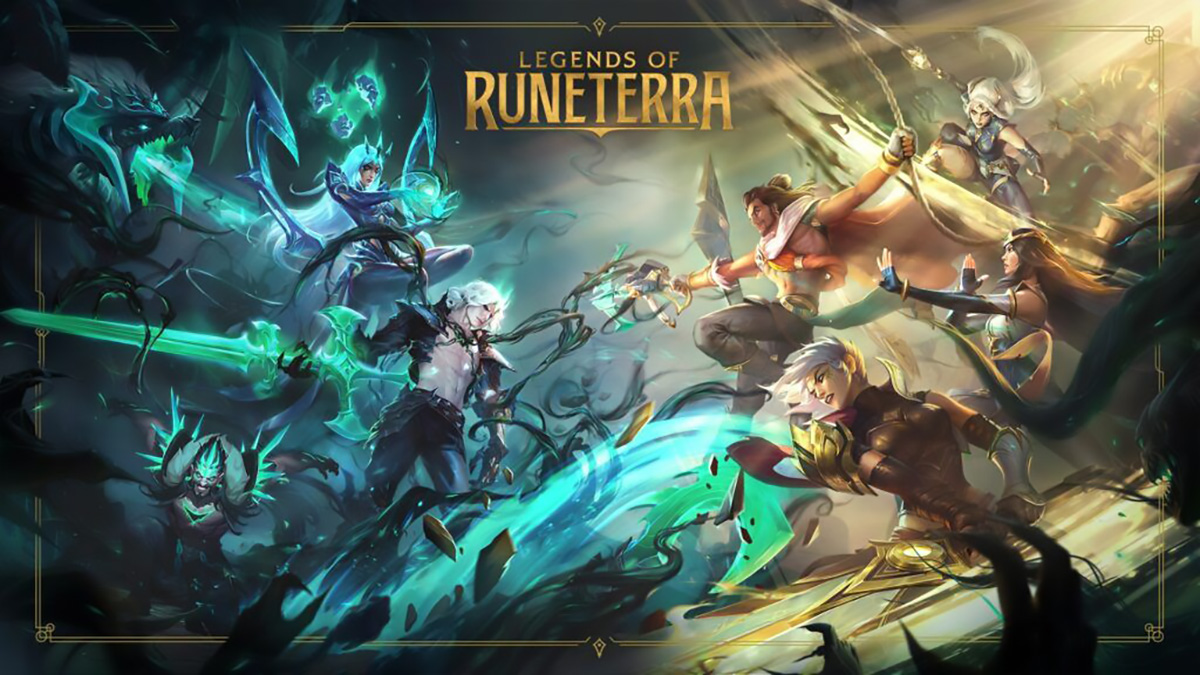 With the whole roster of Riot Games making their way onto the Xbox Game Pass, there is bound to be a host of new players joining the battlefields of Legends of Runeterra. The Xbox Game Pass players come with the Foundations set unlocked, which means that a big portion of essential cards is already at their disposal. And the most essential cards in any deck are the Champion cards because those have abilities that most decks are built around.

The Foundations collection launched with six Regions, each with four Champions of their own. That gives players several options for building a starter deck, especially because many of those champions have been a part of various meta decks themselves. So let’s take a brief look at each of those Regions and their Champions.

Lucian is often used as part of an early introduction to aggressive Scout and Rally strategies. He needs Sena to trigger his level up early, though it’s possible to do it without her — it is just more involved and therefore slower. With an expanded collection, he is quickly outshined by better options.

Fiora is an aggressive card that wants to be in the thick of every combat and win each one of them. She’s also a win condition by herself, though a clunky one at best. She’s more often used as a supporting Champion in beginner decks, but not much more as you acquire more cards.

Garen recently received a nice buff, making him a powerhouse in Elite decks. Elites are a mono-Demacia strategy that can build on playing “honestly” with good solid cards, and Garen is just such a card. With his recent changes, he has found his way back into the meta of Demacian Champions.

Lux has long been one of the mainstays of spell-heavy decks. Her leveled-up form can provide a barrage of punishment to her opponents when played in a spell-spam manner, making her one of the best Demacian Champions.

Ashe is a staple of Freljordian slow, control decks. Her Frostbite abilities and synergies allow her to dictate engagements and staunch the bleeding after the usual wind-up period at the start of the match. This makes her a strong Champion choice in both the main and support roles.

Braum is a strong defensive card, almost guaranteed to soak up damage from the opponent’s strongest attackers in early to mid-game. He is also an important part of the All-Poro meme deck, which is a funny take on Poros that can catch some opponents off-guard from time to time.

Just like in League, Anivia simply refuses to die sometimes. Her card has spawned various versions of the Zombie Anivia deck that can be difficult to deal with when piloted correctly. For beginners, however, her usage can be a bit overwhelming to grasp but still worthwhile to learn.

Tryndamere is a typical bruiser Champion, without any bells and whistles. He’s someone you field when you need a stat stick to swing at your opponent’s face. That means that his simplicity leaves him out of many combo-oriented strategies, though he does find a few niche uses.

Zed is an aggressive Champion through and through. He is used in many beginner burst decks, usually paired with a Noxus portion. He wants to hit the board early and attack over and over, leveraging his shadows and Quick Attack trait to overwhelm the opposition.

Shen is a predominantly defensive Champion used in control decks, most often as support, which matches his ability well. He is a good way for beginners to learn how the Support trait works before moving on to stronger decks that play with it.

Yasuo is a strong midrange control Champion who excels at clearing the opponent’s board with the use of his Stun/Recall combos. He pairs well with other Stun-centric  Champions and is often used in those decks as the main carry.

Karma is an advanced Champion who requires a lot of ramp-up from your deck before reaching her full potential. Her level-up requires the Enlightened condition, meaning you have to reach the full mana bar. She was used in a few Freljord ramp decks, but even there she wasn’t the optimal choice, despite her useful leveled-up double-casting trait.

Draven is an interesting combination between an aggressive and burst Champion — both of which are staple traits of Noxus cards. However, he doesn’t excel in either of those, making him a good in-between Champion, though there have been Draven meta decks in the past.

Katarina’s kit has been outshined for a long time in LoR. Her design is very clunky by the game’s current standards and it seems that she’s has a full redesign pending. But right now, the Noxian assassin is simply too weak to use in any deck or strategy.

Vladimir is another niche Champion, though he finds plenty of use in beginner-friendly decks. The vampire-mage is expensive and more on the control side of the spectrum, but he also teaches the values of correct sequencing of your unit cards.

Darius is another bruiser Champion, but he does have a designated purpose in Noxian strategies. He mainly plays as a heavy-hitting finisher in Noxus aggro decks, especially in his capacity to provide direct Nexus damage with his Overwhelm trait and Decimate spell.

Teemo is one of the staple “trap” Champions in the game and the best at leveraging the Poison Puffcap traps. Though innocuous in strength, his Nexus strikes can quickly pile up the eroding shrooms, bringing the opponent to a sudden, unexpected end. Teemo is also a dual-region card, also counting as a Bandle City Champion.

Ezreal is another spell-centric Champion, whose uncanny ability to barrage both the enemy units and their Nexus with a variety of spells can make for some explosive rounds. He pairs especially well with Lux and the two have been a part of many spell decks since the game’s inception.

The P&Z Region is best known for destructive spells and effects, and the Champion who best encapsulates that trope is certainly Jinx. She plays an almost exclusively aggro style in which she looks to empty her hand as fast as possible to level up and access her special Super Mega Death Rocket spell.

The famed Yordle inventor benefits from casting spells of various costs, which enables him to field boards full of minions thanks to his card-creating effects alone. He is expensive to get going and is a part of a few niche decks, but is extremely fun to play around with. Just like Teemo, he also doubles as a dual-region Bandle City Champion.

One of the best aggro cards in the game, Elise has been part of almost every hyper-aggro deck in the game. What sets her apart is that her decks are fairly cheap to craft for how effective they are at winning games. With Elise and her spiders, matches turn into sprints that can be over in as early as three rounds.

Kalista is a deceptively strong Champion, featured in many of the mid-range “Zombie” strategies that leverage Last Breath units to their full potential. Though not as impressive initially, her low cost lets her hit the board early and slowly build up toward leveling and becoming the powerhouse your opponent has to play around.

Thresh was often considered to be one of the strongest control Champions in the game and for a good reason. While expensive, the unique way in which Shadow Isles decks play allows him to level up quickly and begin leveraging his abilities to dictate the engagements, which supplements the strategy of any deck he’s a part of.

Hecarim is a Champion that introduced the mechanic of building a deck around summoning Ephemeral units while attacking (along with Zed to a lesser degree). Later on, Shurima decks have especially leveraged this sort of strategy, but even then Hecarim found a way to pair up and play in some of those decks too.

Other Regions and Champions

After Foundations, Riot has released five more sets, all of which have brought new Champions to the existing regions, as well as whole new Regions to build decks with.