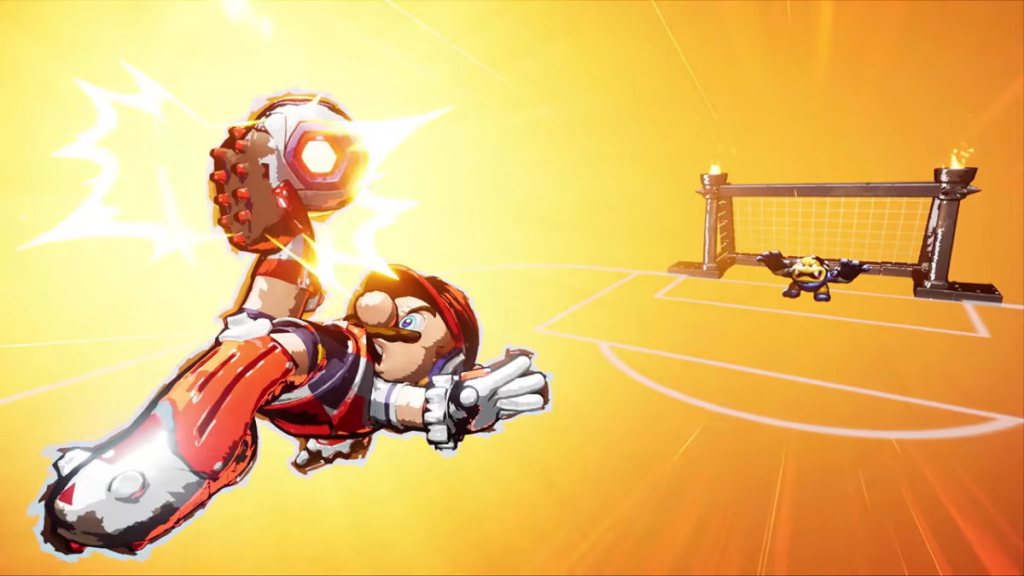 The cast of the Mario games is vast and expansive, but Battle League will only launch with 10 characters. Nintendo has promised that more characters will be coming as free updates, so if you don’t see any of your favorites, don’t worry. There’s a good chance they’ll make it in the game eventually. The biggest omission at launch is Princess Daisy, a fan-favorite character from the franchise who was especially popular within the original Mario Strikers video game. We expect that she will make it in the game sooner rather than later though.

Each character comes with its own strengths and weaknesses. Bowser, for example, has high shooting stats but low speed. Stats can be tweaked with unlockable equipment that you can use to help diminish weaknesses or prioritize strengths. It seems as though you cannot choose your goalkeeper and everyone is stuck with NPC Boom Booms.

The head honcho of the Mario franchise and Nintendo’s mascot, Mario leads the pack of playable characters in Mario Strikers: Battle League. People all over the world recognize Mario’s stump body, red cap, and fire powers.

Always playing second fiddle to Mario, Luigi is the eternal player two in most people’s minds. Whereas Mario is red, Luigi is always wearing green. He is taller than Mario, but more of a coward as well.

Bowser is a big, monstrous turtle whose only goal in life is to marry Princess Peach. Mario is always chasing after him to save the Princess, and Bowser has a legion of minions under his command.

Princess of the Mushroom Kingdom, even though she’s the only royalty living in the kingdom and should be queen. She is constantly getting kidnapped by Bowser and needs to be saved by Mario, but she is shown on occasion to have her own set of special powers.

Rosalina is an all-powerful princess that commands the Comet Observatory from space and is the mother of all Lumas. She is a constant ally and fan-favorite character from the Mario franchise.

Yoshi are dinosaur-like creatures that Mario and his allies can ride on to travel the different parts of the Mushroom Kingdom. They are friendly, cute, and come in different colors.

Mario’s original nemesis, Donkey Kong is a big ape who originally went out of his way to kidnap Mario’s girlfriend Pauline. He has since become a hero in his own right, being a protector of his jungle.

Mario’s evil twin, Wario is everything that Mario isn’t. He is lazy, greedy, and doesn’t value the importance of friendship and teamwork. He loves garlic and is known for his dangerous farts.

He didn’t make it into Super Smash Bros., but at least he made it to Battle League. Luigi’s evil twin, Waluigi is very tall and thin. He is rude and unlikable, with his only friend being Wario.