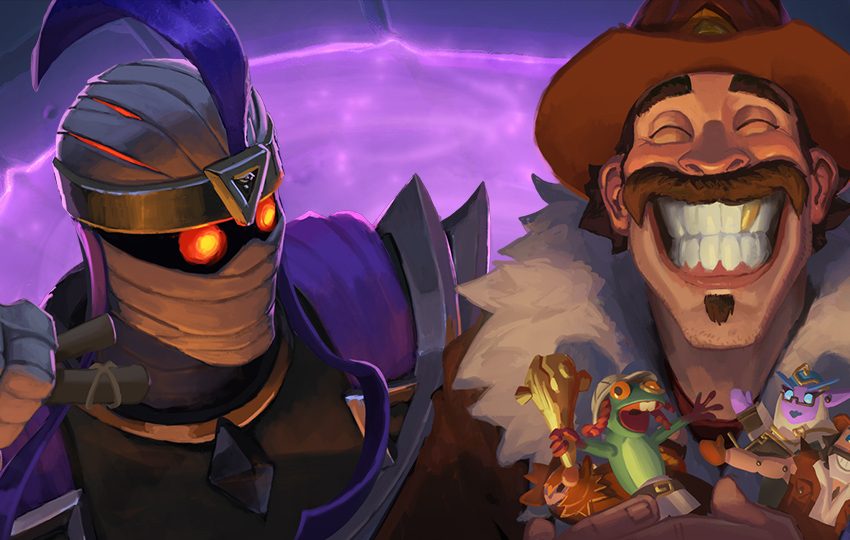 The last month has been an interesting time in Hearthstone, with an ever-shifting meta as the Galakrond’s Awakening cards were trickled out piece by piece. It was good timing for it as well, with the meta having fallen into a weird place with quite a lot of binary matchups.

While some of that still exists (particularly with the top two decks), the meta is a bit more balanced currently, without as much of a rock paper scissors feel to it.

Hunter and Paladin really won out with this set. The former got two new powerful cards (Crazed Felwing and Rotnest rake) for the already pretty solid Dragon Hunter deck, and the latter got… technically nothing, other than the ability to completely stomp all over Dragon Hunter on ladder, since it runs none of the new Paladin cards.

But that’s getting ahead of ourselves. Let’s take a quick look at the 19 currently viable decks and their overall deck archetype, and the overall best classes in order.

As we can see, Hunter still has a pretty good midrange focus, though most of the midrange decks bring the pain hard and fast as well, though falling just short of aggro. Hunter’s current strengths are board control and tempo, able to make huge swing turns to come from behind and win, or secure an already advantageous board state.

Most of these decks excel at destroying tall boards but can stumble if you go wide.

Mech Paladin is almost singlehandedly carrying Paladin right now, with Pure Paladin having enough bad matchups against prominent decks (pretty much all types of Rogue, the more aggressive Hunter decks, Embiggen Druid, and so on).

Mech Paladin, however, creates wide, sticky boards that are a complete nightmare for decks like Dragon Hunter and Embiggen Druid to handle, and as a result has favorable to even matchups against almost every deck in the game, except most popular Warrior variants, which it struggles against.

Paladin’s strengths include wide, hard to remove boards,  and the ability to snowball starting from turn 1 (dropping Galvanizer on turn 2 is likely to be an automatic death sentence for your opponent).

Do not be fooled by Druid taking the No. 3 slot in win rates here: Druid is by far the class to beat, and Embiggen Druid in particular.

Embiggen Druid as an archetype was essentially created as a serious deck by the new expansion and has insane high roll potential. It’s the deck that is currently keeping a lot of decks down and simultaneously bolstering others up; the success of Mech Paladin and Dragon Hunter are tied heavily into how thoroughly they beat Embiggen Druid.

The overall strength of Druid right now is being able to create board states that are difficult or impossible for people to deal with, either in repeated flooding of enemies (Token Druid) or the creation of ever bigger threats (Quest and Embiggen Druid).

While normally listed as two separate decks, we see little appreciative difference between the regular and Highlander variants of Galakrond Rogue; they have roughly identical matchups and the same key cards.

These are the decks that just kind of methodically plod along, with decent win rates against pretty much anything. If you’re looking for consistency, Rogue is your class right now.

Their strength primarily lies in big tempo plays, particularly in the early and mid game. The Malygos deck is obviously the odd man out here (and in the whole meta), being a pretty standard “control until the late game and then win” kind of deck.

Warrior is in an interesting spot, showing off the duality of man in a way. Galakrond Warrior is ruthlessly aggressive, with an absurd amount of fast damage and even an OTK combo under the right circumstances. Highlander Warrior is basically the Control Warrior of the last few expansions with some tweaks to account for it only having one of everything.

These two decks, despite their polar opposite playstyles, point to Warrior’s biggest strength: Warrior has very strong cards with flexible, multi-modal play for each of them.

There are two variants of Resurrect priest right now: Quest and not-Quest. Both decklists are largely identical, with a few minor changes. The only difference is a few matches that were basically coin flips are now the opposite coin flip, but still close to a 50/50 matchup.

The strength of Priest lies in endlessly resummoning big minions currently; that’s your only viable option for playing Priest in the current meta.

Mage is in a rough spot right now, with one deck on the cusp of falling into Tier 3 status. Its main saving grace is it fares well against Priest, Warlock, and Druid… but it loses more often than not to Embiggen Druid.

The Mage is currently a slot machine, relying a lot on randomly generated cards and effects with things like Dragonqueen Alextraza, Puzzle Box of Yogg Saron, Power of Creation, and similar effects to hopefully cheat big effects out early. This deck is entirely feast or famine, and its strength lies in RNG being ever so slightly on its side, with some effects being inherently big enough when discounted that almost any result is favorable at certain stages of the game.

Warlock is in a weird position. Despite being so low on this list it actually has favorable matchups against a lot of decks. Unfortunately where it stumbles is at a key point: it loses to pretty much every Hunter variant imaginable.

Its strength lies in board flooding and buffing, building an unassailable power base over time. Unfortunately Hunters don’t typically care about this, as they can SMOrc their way to victory without having to worry a ton about contesting the board or alternately clear and deal damage at the same time. It doesn’t matter that the warlock can kill its opponent consistently by turn 6 if their opponent can kill them instead by turn 5.

Shaman’s best deck currently is Tier 4; unfortunately Quest Galakrond Shaman is not what it used to be.

Shaman currently has poor matchups against almost every deck in the game, save most Priest decks and other Shamans, and as such they’re basically extinct in the current meta. Their strengths lie in creating big swing turns… unfortunately, a little too late for it to actually swing the game any.

Overall the meta is relatively diverse, though the fact that a class has been so very thoroughly pushed out of the meta is a troubling sign for the future.

In general, if you want to win, playing a tempo deck is a really good idea right now, as the meta is overall very fast, and starting from behind is a clear killer. Find a way to make a deck that can swing big and stabilize at the mid stages (and not lose in the early game of course) and you’ll be fine for the most part. The few control decks that exist prey on this kind of deck, but don’t have as much of an impact as the decks you’ll be facing down more often.