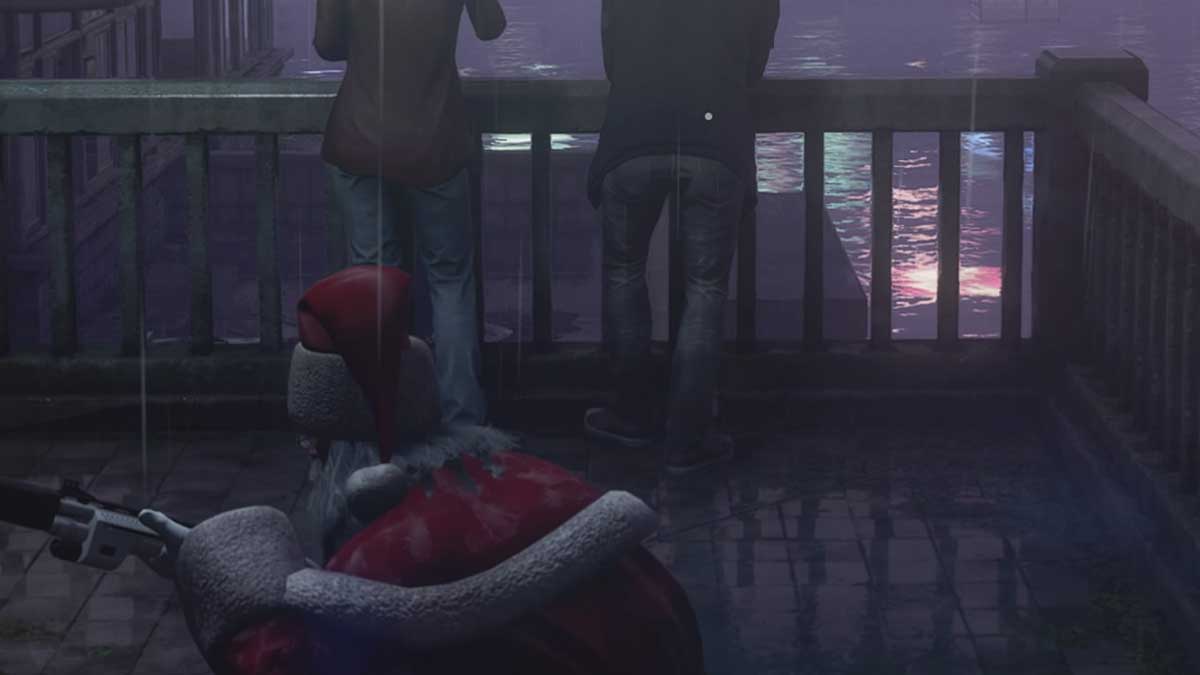 This Featured Contract requires you to kill all targets with a shotgun for bonus experience points. That means that you’ll need to bring one along in a briefcase. We recommend the ICA Tactical Shotgun because it’s silenced, and any other shotgun will draw unwanted attention. For this route, you’ll also need a Coin. We’ve opted for the Santa 47 Suit, but you can wear any suit you want because you won’t be seen.

Step 1: Two targets in one

From the starting location of the River-Side Walkway, head right along the walkway until you reach your first two targets. They’re standing together, leaning on the railing. Wait for the woman with the umbrella to walk past them and away down the walkway. Then, take out your shotgun, kill both targets quickly, and dump their bodies over the railing. If you get your shots right, you might throw the targets over as you kill them.

Put your shotgun back in your briefcase and head over to the laundromat. There’s a keypad at the back of the location next to a door that you need to go through. Type in 0118 and go through the door and up the stairs. See below for a map reference for this keypad.

Go all the way up the stairs, sneaking past the two guards sitting in chairs as you do. At the top of the stairs, the door will open onto a rooftop where a guard stands near a sniper rifle. Subdue this guard and go down the stairwell on the roof.

On the next level down are two guards. You can go down the stairs and walk behind them without them noticing you. Lean against the back of the air conditioning unit on this level and flip a coin to draw one of the guards over. Subdue him, and then subdue the second guard.

Now go down to the next level, where your third target is, take out your shotgun, and kill them. We noticed a glitch in this location that causes the body to be spotted if you move it, so leave the body where it falls. Put your shotgun away and make your way back through the laundromat and into the main square.

The last target moves around a lot, so depending on how long it took you to kill the first three targets, they may be in one of a few locations. However, the best location to wait for the target to move to is the stairwell near the building where you killed the third target.

To get here, you go down the main stairs towards the train station in Chongqing, but then turn right and go up the stairwell. The fourth target will eventually come here, and when they do, you should knock them out with your briefcase and shoot them with the shotgun. You can also dump the body over the railing to ensure it’s hidden. Then, all you have to do now is find an exit to complete the mission.