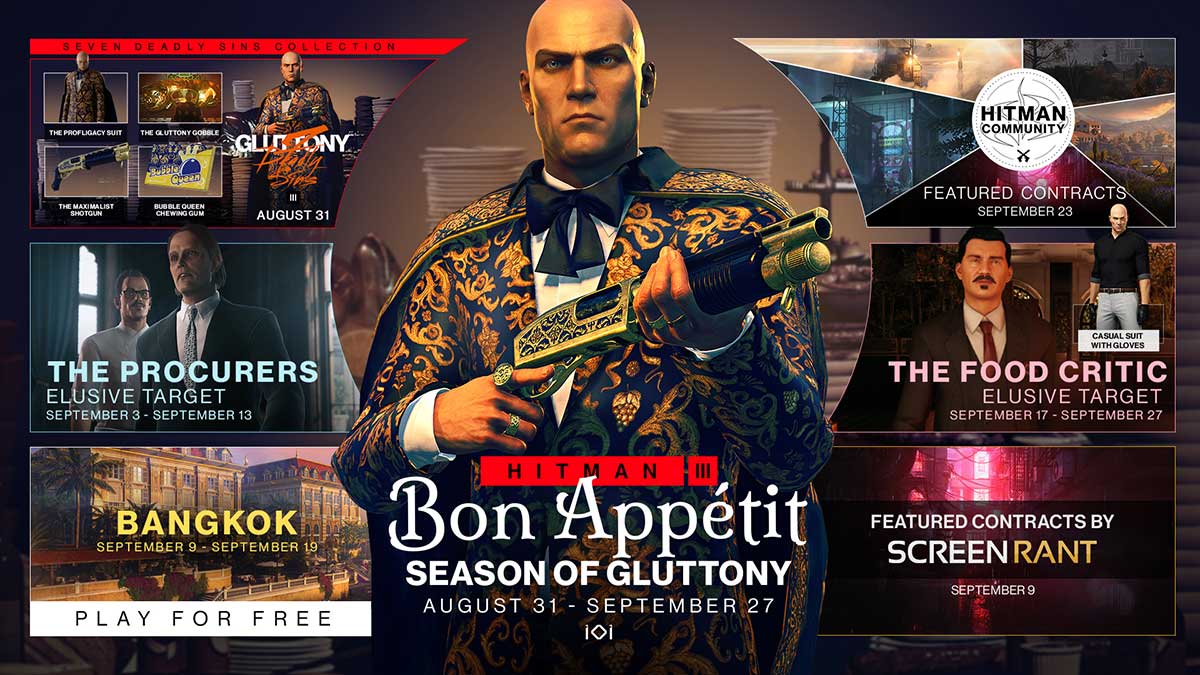 Hitman 3 Season of Gluttony is now live, and IO Interactive has outlined exactly what’s coming with it over the next month. As expected, there are Elusive Contracts, Featured Contracts, and a brand new Escalation to keep even the most dedicated players busy.

The season kicks off today with a brand new Escalation: The Gluttony Gobble. In this mission, players must feed the pig the kills it desires, but for the best rewards, they need to do this using the precise weapons and methods the pig desires. This pig is a fussy eater, and it wants Agent 47 to work incredibly hard for its dinner. Players can earn the Maximalist Shotgun, the Profligacy Suit, and the Bubble Queen Gum Pack sedative for completing this Escalation.

Elusive Target The Procurers: September 3 to 23

The first Elusive Target of the month is The Procurers. This mission sees Agent 47 hunting down two targets in Dartmoor. The embalmer and chef pair have a dark secret that binds them, but it’s time for their work to stop as Agent 47 puts an end to both of their activities.

Play for free Bangkok: September 9 to 19

Bangkok is the next free location that all Hitman 3 players can access. The location will be available for ten days, and any progress made there will be carried across to your profile even after the free period ends.

The first set of Gluttony-themed Featured Contracts come from Screen Rant. These send players to Chongqing, requiring them to kill targets in a variety of food-themed missions.

The second Elusive Target for this season is a legacy mission from Hitman 2. Set in Bangkok, so all Hitman 3 players can attempt it, this mission requires Agent 47 to take down the harshes food critic in the world. He’s clearly crossed one too many chefs in his career. For completing this mission, players will unlock the Casual Suit With Gloves.

The final set of Featured Contracts for the season will be from the Hitman 3 player base. Each Contract will be carefully chosen from the list of entries made throughout the season. All we know is that they’ll be themed around gluttony, but since they’ve not even been chosen yet, there’s nothing more to know.