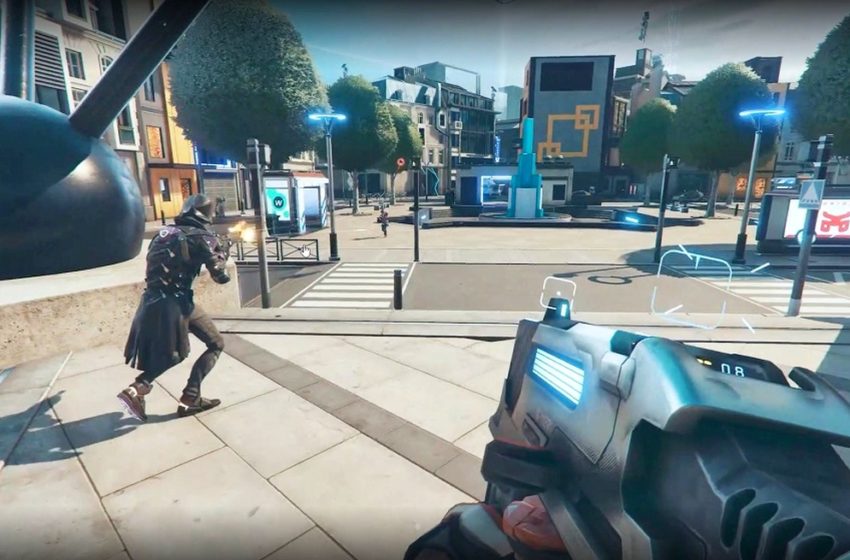 It seems another sci-fi battle royale is upon us, this time from Ubisoft. The project is named Hyper Scape and is slated for release on July 12, according to an early announement from journalist Rod Breslau via Twitter and additional information available on the game’s official site.

While very little is known about this new game, it’s difficult to avoid the Apex Legends parallels. Ubisoft has clearly been developing the title in secrecy, setting it up for a surprise reveal. Breslau states that the studio has organized an aggressive promotional campaign with the help of Twitch, comparing it to “the launches of Valorant and Apex Legends.” These tactics were deployed by Respawn extremely effectively during last year’s Apex Legends release and replicated with the same results in this year’s launch of Call of Duty: Warzone.

There is actually enough in the description we have to infer that Hyper Scape will play similarly to Apex Legends. We know this is a first-person shooter that comes with certain dynamics that are unique to the genre and make gameplay rather different from that of third-person shooters like Crucible and Rogue Company. We also know that this is a AAA free-to-play game from a big studio, which means it is designed with big lobbies in mind, unlike the smaller, experimental formats of games like Hunt: Showdown and, well, Crucible again.

The final key takeaway is the descriptor “fast-paced” Breslau uses to describe the game, and the “pulse-pounding action” Hyper Scape‘s official pitch promises. One of Apex Legends‘ defining features is that it’s a game of extreme mobility and split-second decisions. If Hyper Space is “fast-paced” and “pulse-pounding” in how it plays rather than just in how it’s advertised, expect it to be a high skill ceiling game like Apex Legends.

What is shown in the teaser tweet makes Hyper Scape‘s Twitch integration similar to the one found in Vermintide 2. It seems that people tuning in to watch a streamer playing the game will be able to vote on in-game events, literally affecting the game. This is something unique to this game, and the closest thing we have in Apex Legends is custom lobbies organized by streamers for fun. And that’s not close at all.

Hyper Scape is “set in a futuristic virtual world,” according to Breslau. The “virtual” part seems to thematically tie in with the Twitch integration feature, as the game’s setting involves a mega-corp known as Prisma Dimensions, which appears to be in charge of a VR blood sport known as Crown Rush. Beyond the sci-fi feel of these early screenshots, there isn’t a big thematic similarity between this new battle royale and Apex Legends.

However, Hyper Scape seems to feature an urban setting, and that will be big for a lot of Apex Legends players and Titanfall stans who have been hoping for a city-like map since Apex launched. It’s too soon to dream that big, but it’s possible that Hyper Scape lets us relive the glory days of Angel City.

According to Breslau, Hyper Scape will launch on PC on July 12, and a console release will follow up later in 2020. This may potentially indicate the game will release for next-gen consoles, which are slated for the holiday season. In any case, it appears that Hyper Scape will be available on PC and consoles, just like Apex Legends. Whether crossplay will be available seems like a matter of when, rather than if, considering how important crossplay is to players.