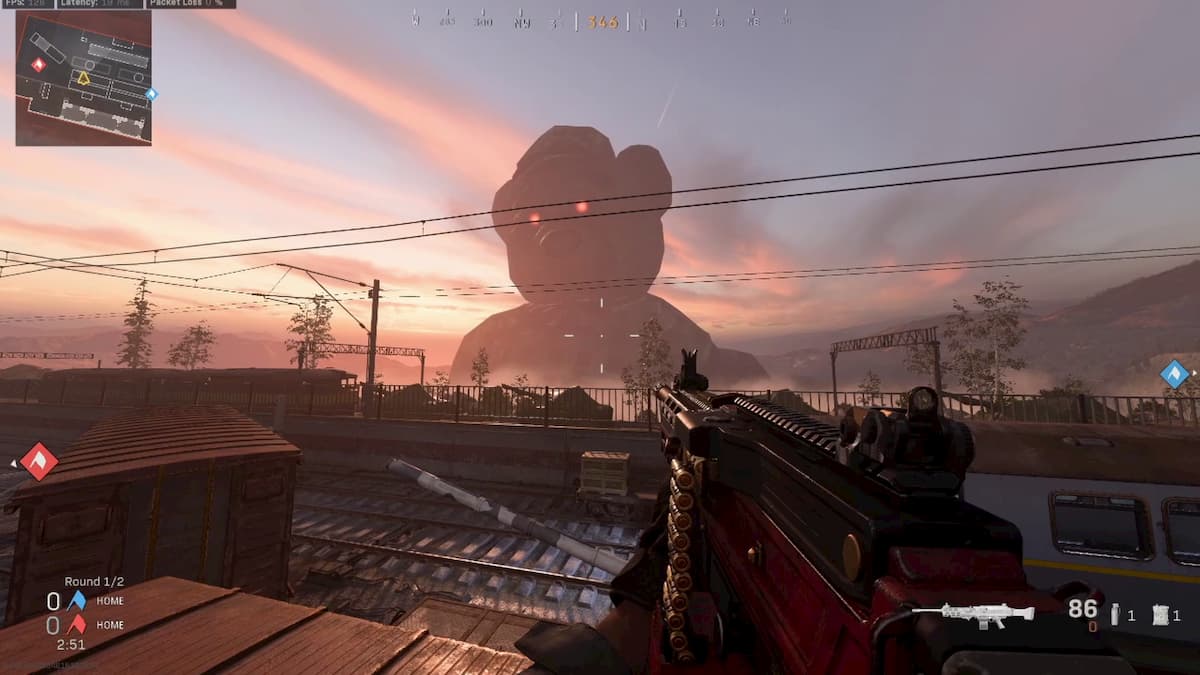 With season 6 of Call of Duty: Modern Warfare comes a few brand new multiplayer maps, including the gunfight map Station. As usual with Call of Duty maps in recent years, there seems to be a secret or easter egg hidden somewhere. Players take to custom games, shooting everything on the map for hours, trying to figure out how to activate something. This one makes a giant teddy bear rise from the ground then get demolished by an airstrike. Want to see it for yourself? Here’s how.

While technically you can do this with any loadout in the game, if you use a gun with a small magazine and little ammunition, you’ll have to commit suicide or have your friend kill you multiple times to get ammo back. Instead, the easiest way around this is to use 2 LMGs.

Nothing else in your loadout really matters. The plates you need to shoot take a lot of damage to destroy, so the more rounds you have, the better.

On the train station wall on the outside (the building is yellow), you’ll find white plates of different shapes hanging on the wall, as if they’re decorations. Shoot all of them until they are destroyed. This will take quite a bit of ammo and is the reason for the LMGs, so be ready to spend a few minutes firing. There are six plates in total.

There should be a total of six total plates you shoot off the wall, but only five have a number underneath. The sixth has a keypad under it, which we’ll get to in a second. Ignore the keypad for now, and while facing the building, read the numbers from left to right. Write down the numbers, take a photo, or just remember them.

Walk over to the keypad and enter the code by shooting the numbers in the proper order. If you’re using an LMG as suggested, be careful to shoot only one bullet at a time, as hitting the wrong numbers will reset the code.

As soon as the code is entered, you’re going to start hearing a sound. Turn around to face the opposite direction of the building where you’ve just punched in the code. It is recommended that you jump up onto the train cars in front of you. If you’ve followed the steps correctly, you will see a giant “Godzilla Teddy” bear fall from the sky and land on the ground in the distance. You’ll see just its glowing eyes for a second, then once the dust settles, you’ll see the teddy move a bit and make a loud noise, then get killed by a few planes. They drop some bombs and fly away, and the teddy falls back into the ground.

There were four new multiplayer maps introduced in season 6 of Call of Duty Modern Warfare, so it’s possible there could there be more easter eggs.