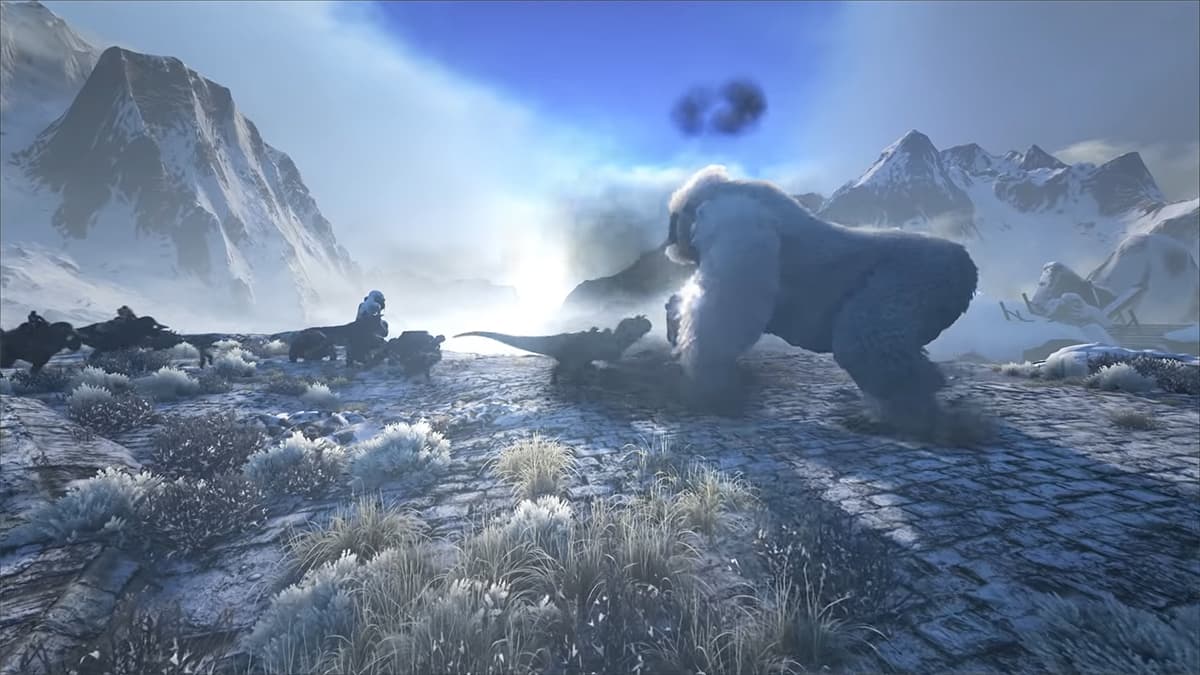 The Megapithecus tasks players with diving into more difficult dungeons for this set of artifacts. The underwater dungeon of Caverns of Lost Faith can be a harrowing experience, and it only becomes more difficult from there. The good news is that the boss fight is relatively straightforward once you gather the artifacts.

Dungeon 1: The Caverns of Lost Faith – Artifact of the Brute

This is likely your first underwater cave, and it can be brutal if you aren’t prepared. Twisting caverns, a slew of enemies that will attempt to dismount you, and massive spawn rates can make this a frustrating endeavor. Eat your curry, bring your SCUBA, and have a tamed Basilosaurus to trivialize this dungeon as much as possible.

If you have friends, even better: have one player riding the Basilosaurus to tank Cnidaria shock damage, tailed by others riding Megalodons for raw damage output. If you’re struggling here, take note: this is considered to be the easier of the two underwater dungeons.

This dungeon is either a massive pain or the easiest ever: there is no in-between. After submerging and swimming through a short starting area, you’ll be at a massive cavern. Look down, ensure the fall is relatively clear of dinos, and you can land right on the artifact using your parachute. If you clip onto something, use another parachute. Once landing, you’ll need to spray down a couple of spiders, grab the artifact, and grapple back to the beginning.

If free-falling isn’t your preference, be wary: the path circles clockwise around the cavern with treacherous jumps and dense enemy spawns. Coming back up after grabbing the artifact can be just as lethal as the initial descent.

One of the most difficult dungeons in the game, bring friends, dinos, and spare equipment. Large sections of this cave are underwater, where enemies will attempt to dismount you and break your SCUBA, leaving a few players stuck between two large sections of water with no way out aside from drowning. Follow the glowing green moss; it will lead you to the artifact.

There are two threats in this fight: an obscenely chilling cold and cliffs that kill anything that falls from the platform. The Megapithecus loves to throw projectiles that can launch dinos and players off the edge. The fight can turn sour if a few good hits land. Micro the Daeodon to ensure its healing, let the mate-boosted Yuty’s buff your T-Rex’s and rush the enemy. The Megapithecus has the lowest health of all bosses, so you just need to keep dinos off the edges and keep yourself out of the line of fire.

Note that the Megapithecus also brings in a slew of Mesopithecus (smaller apes) occasionally that will also try to wreak havoc. A good tactic is trying to stay mounted on the Daeodon to allow management of its food to keep the healing buff up. Just try to sit near the back of the pack. Once the Megapithecus is down, remember to grab its banner to let everyone know you’re done monkeying around.