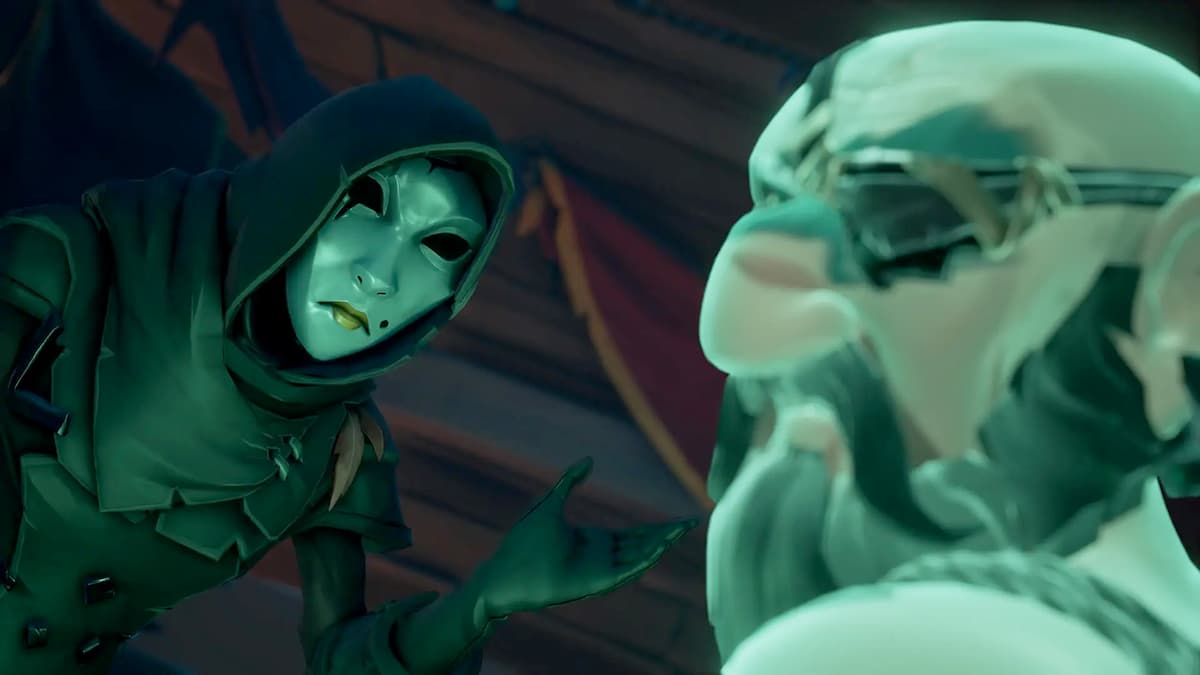 The Hunter’s Cry Adventure, running from August 18 to September 1, is the sixth time-limited story content in Sea of Thieves. This time, you’re charged with saving the Hunter Merrick’s Soul from the Dark Brethren, who hold him in a shadowy facsimile of the Sea Dog’s Tavern deep in the Sea of the Damned. You’ll be working with other randomly selected crews to complete the Adventure, and coordination is key. There are also six Deeds to complete alongside the in-game content, and you’ll likely do so as a natural part of finishing the Adventure.

The six Deeds in A Hunter’s Cry Adventure

Three of the Deeds you’ll need to complete — the first and last two — are easy. You go to a place and talk to a person. The middle four take much more effort. Here they all are.

1. Enter the Sea of the Damned

When you first awaken at the Tavern, check in with Larinna. At the bottom of her menu, you’ll see the message “[BEGIN ADVENTURE] – I want to help save Merrick!” Select it, and she’ll direct you to the docks where you’ll speak with the Pirate Lord, who will open a portal to the Sea of the Damned. Sail into the portal to earn this Deed.

Surrounding the central island in the Hunter’s Cry portion of the Sea of the Damned. Sail up to each and collect the ghostly light from a nearby brazier in your Latern, and use it to light the other two on either side of the stairs leading to the Lighthouse entrance. Lighting both will dispel the mist blocking your way, and you can ascend to the Lighthouse Lens. Use your lantern to light the firepit behind the lens, then use the wheels at either side to aim it for another brazier on the main island. Doing so earns the Deed.

Nothing complicated here — there will always be at least two wandering Ghost Ships around the island. They take four or five cannon hits to scuttle, and once you’ve defeated three of them, the Deed is complete.

Lighthouse beams don’t just light braziers. They also cause ghostly bridges to manifest if their light shines on their location long enough. Aiming the northern Lighthouse at the opening between the two main mountain peaks, for instance, causes a bridge to form after the light’s been shining through for several seconds.

You and other pirates will need to work together to create all of the jetties, platforms, and bridges that lead to Merrick. Along the way, you’ll need to continue lighting Braziers, and once you light all of them on your way to the drawbridge, the seal around the lowering capstan will be gone, allowing you across.

This step is as simple as crossing the drawbridge, speaking to Merrick, and then listening to the Dark Brethren and the Pirate Lord trade barbs. Once the conversation is over, you’ll have the Deed done.

6. Deliver a Letter to Serik

Once back on the Sea of Thieves, head to any Tavern and speak to Larinna again. She’ll give you a letter to take to the North Star Seapost northwest of Reaper’s Hideaway. Give the letter to Serik, who lives on the dock’s edge, and listen to the letter’s contents. When she’s done reading, you’ll complete not only the Deed but the Adventure.