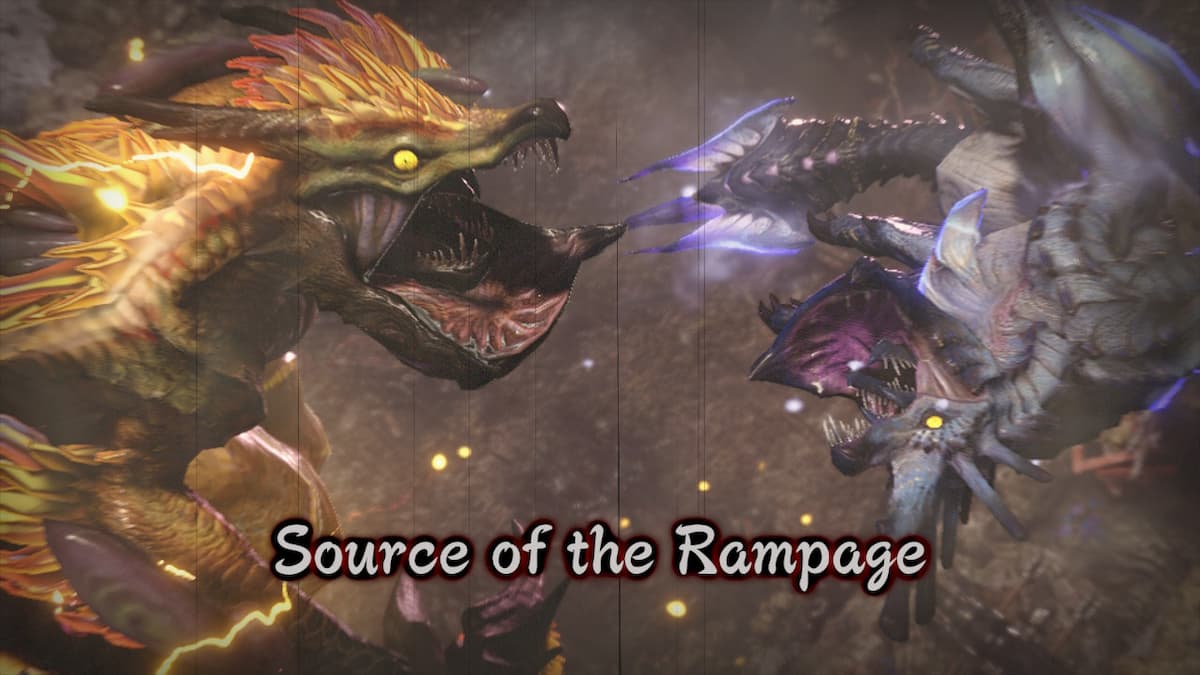 The Allmother battle pits you against the two elder dragons that have been behind the Rampage in Monster Hunter Rise. We previously saw these two after defeating Thunder Serpent Narwa. Now, we’ll be facing off against both of them, but only for a brief time. The primary fight will be with the new transformation of Narwa as she becomes the Allmother. You will not be able to complete this battle until you reach HR 50.

How to complete The Allmother

The first portion of the battle has you fighting against the Wind Serpent Ibushi. It will be a slightly different fight from the battle you had against it when you could only fight it during a rampage battle. Now, it has the original battlefield of when you fought against Narwa and has more AoE-based attacks.

Ibushi will swerve and dive throughout the battlefield, forcing you to dodge out of the way or leap into the air to avoid its attacks. It also has the ability to create tornadoes in front of it that bring you into the air. Sometimes, these benefit you by giving you access to hitting it in the head or chest, but it does a small amount of damage each time.

When you damage Ibushi enough in this arena, it will land on its back, similar to the Narwa fight, and you can leap on rocks that appear around its stomach to damage its center. Alternatively, rocks will float up around it with ballista, and you can attack it when rocks surround it. The best place to hit when the rocks are protecting it is the rocks. Each time you take out a rock, they explode, doing a massive amount of damage, and you can do this to all of the rocks surrounding Ibushi. It makes the fight much faster.

When you’re fighting Ibushi, make sure to aim for the glowing sections on its chest, arms, tail, and head. These will deal the most damage to it.

After damaging Ibushi enough, a cutscene plays out, causing you and Ibushi to fall through a cavern below. Narwa will be here. When this happens, a pair of rocks with machine guns above. While it shows both of these elder dragons in the same place, you want to focus all of your attacks on Narwa at this time, especially if you’re on a machine gun. The first part of this fight is Narwa devouring Ibushi, slaying it, and absorbing its power to become the Allmother. Now, it is you against the Allmother in her final form.

Much like Ibushi at the beginning of this battle, Narwa the Allmother has widely different moves, but she is still thunder based. We highly recommend you watch your status bar during this battle because it is easy to gain thunderblight, which increases the amount of damage her thunder abilities will do you, making the battle much harder for you. You’ll be able to remove it by eating a nulberry.

Narwa has a wide variety of AoE-thunder attacks. You’ll be able to see when she’s about to use the ones that summon lightning when she slams her claws into the ground, conjuring it in all of the locations where the ground is glowing. After this attack, she normally follows up with a tail swipe. Other times, she’ll fire an electric blast from her mouth, sending it out against you in a small ball, combined with the electric rings you see when you first encountered her. These rings are much more dangerous because they rotate as they move towards you, changing direction on you pretty fast.

Several times throughout the fight, rocks float in the air with machine guns on them, allowing you to do a good chunk of damage to her by hitting attacks against her stomach or head. These are some of the best locations to do the most damage with the machine gun or when you’ve knocked her down, which can be pretty rare.

Another two ultimate attacks you want to watch out for are when the rocks appear, and Narwa floats up to the top of the cavern, and she releases a purple bomb to the center of the arena. This bomb is similar to the one you can use during the rampage quests. While powerful, it doesn’t deal as much damage, and you want to make sure to be on the rocks when she uses this. The other attack is when she conjures a tornado storm to the center of the arena, firing lightning out around the inner ring, but several metal spears appear from the ground and rotate around. To avoid the spears, try to run up against the wall as much as possible. The tornado will slowly pull you in, and being hit by any of these spears can ruin your battle.

You’ll know you’ve reached a little over halfway through the battle with Narwa the Allmother when Magnamalo shows up. When he does, he and Narwa will face off for a short time, but she will stun him and enable you to ride him and use his power against her, doing even more damage.

Narwa the Allmother does not alter her attacks following Magnamalo’s appearance, but she does become more aggressive and quick with her attacks. Once you’ve completed the battle, you’ll be able to return and become the Champion of Kamura Village.