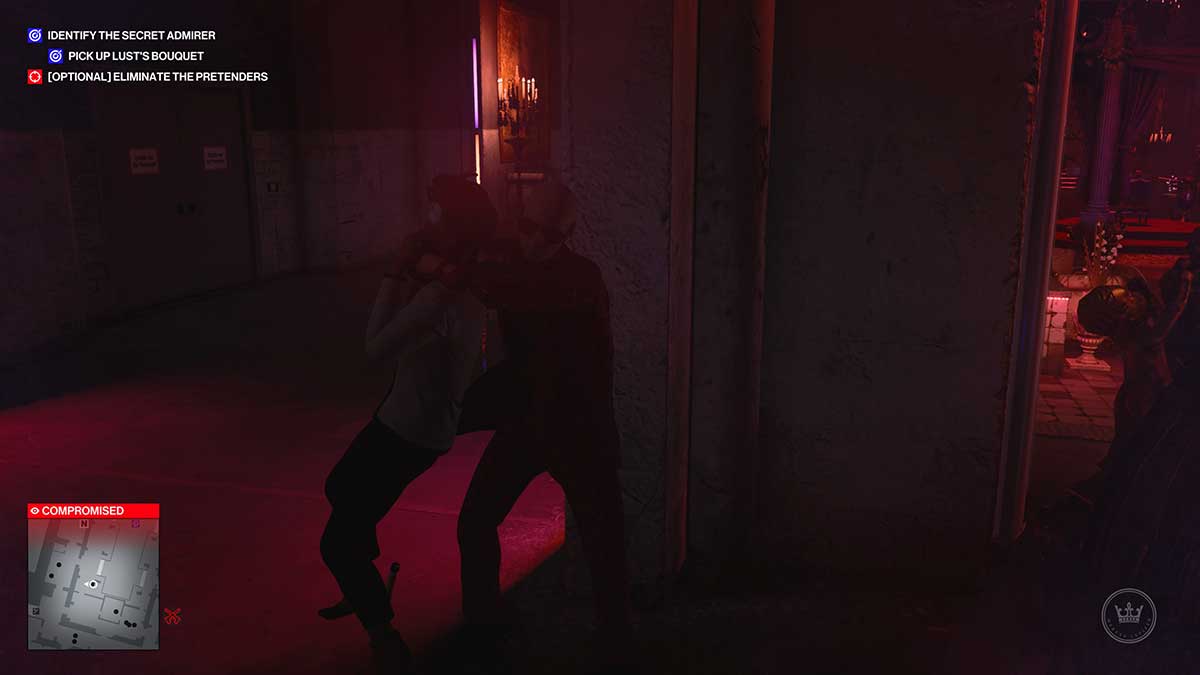 Hitman 3: Season of Lust brought a brand new Escalation, The Lust Assignation, to the game. This Escalation also adds a brand new challenge to the game: The Great Pretenders. This guide covers the easiest way to complete this challenge in your next playthrough.

What is The Great Pretenders challenge?

This challenge requires you to kill all the NPCs in Lust’s ballroom that aren’t her admirer. Unfortunately, due to this Escalation having a random admirer each time you attempt it, the pretenders change every time you play. However, the easiest method for killing all the pretenders is the same regardless of which NPC ends up being Lust’s admirer. Remember that the admirer won’t be the same every time you play, so don’t always assume you know who to kill.

Step 1: Give the admirer Lust’s Bouquet

The first thing you’ll need to do is give Lust’s bouquet to her admirer. To do this, you’ll need to find at least three clues to work out who that is. This also unlocks the bouquet. Once you’ve given the bouquet to the admirer, it triggers all the other NPCs to start dancing.

Step 2: Lure pretenders away with the gramophone

Once all the pretenders are dancing, you can use the gramophone at the back of the room to lure them away one by one. You can do this by turning the gramophone on, waiting for an NPC to be distracted by it, then turning it off again. This ensures that no other NPCs will be distracted and interrupt you while you murder your targets one by one.

When an NPC starts to walk over to the gramophone, move away from it and watch them. Wait for them to start walking away from it and then throw an item to distract them and draw them into the small corridor just behind the gramophone. Once the pretender is safely out of sight from the other NPCs in the room, kill them. You can hide two bodies in the trunk in this area.

Once you’ve filled the trunk and have a third body lying in the corridor behind the gramophone, you’ll need to change tact. Begin to draw the pretenders from the gramophone over to the area under the stairs. You can kill them without anyone seeing them here and drag the bodies behind the various objects to safely leave them with the others in a pile in the corridor.

Repeat this process until you’ve killed all the pretenders. You’ll know you have because the optional objective will complete in the game’s UI. Then, you can exit the mission and see the challenge unlock at the end of mission screen.