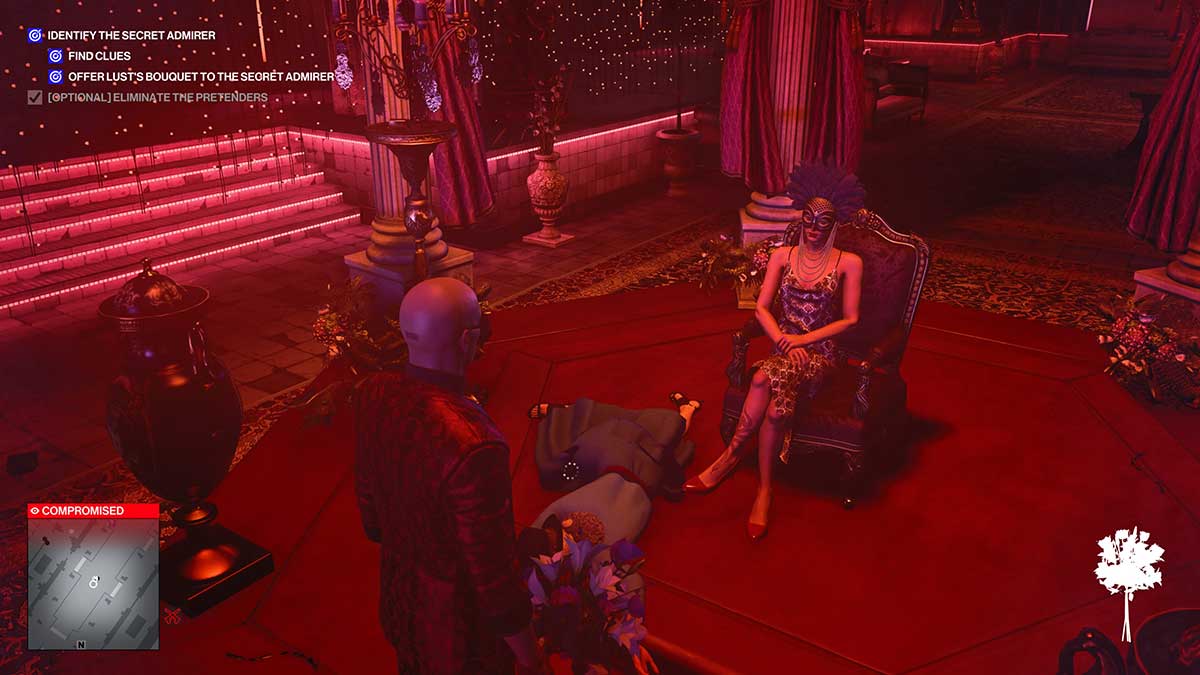 The Lust Assignation is a single-level Escalation that was added to Hitman 3 with Season of Lust. It’s a different kind of Escalation because it only has one level, and almost every element is randomized. While we can’t provide you with a guide to complete the Escalation with a rank of Silent Assassin, we can offer you some tips and tricks to help you complete it.

The goal of The Lust Assignation is to find Lust’s secret admirer. You begin the mission in a ballroom in the revamped version of Berlin. One of the people in this ballroom is Lust’s admirer, and you need to give her bouquet to them. However, you’ll first have to find out which attendee is the admirer by collecting clues from around the map that help you identify who that is. When you think you know which attendee is the admirer, you can then give them the bouquet. However, you can also kill every other attendee before doing so for bonus points. All of this is made quite difficult thanks to many elements of the Escalation being randomized.

Which elements of The Lust Assignation are randomized?

Almost every element that can be randomized in this Escalation has been randomized. For example, the admirer changes each time you start the Escalation, so you’ll have to collect at least three clues to figure out who they are every time, but that’s not so bad since you must collect three to unlock Lust’s bouquet anyway.

The clues all have the same images each time you play, but the wording will be different. The words are what’s important since they tell you specific details such as whether the admirer is a smoker, what they’re drinking, whether they’re a man or woman, and if they have a beard or not.

Every clue is inside a safe. You unlock safes with bombs or keys, both of which are placed all over the map, and their locations don’t move. The locations of each safe do move, though. If you restart the Escalation, you’ll be given an entirely new layout of clues to collect. There seems to be no pattern to this, so you just have to work with the safe placements that you’re given.

It’s only these three elements that are randomized, but because they change every time you try the Escalation, it feels like a completely different mission every time.

As you play this Escalation more and more, you’ll notice that in certain locations, NPCs move around where a safe would be, even if it’s not there. You can use this to your advantage because you’ll quickly work out the best way to subdue any annoying NPCs. We developed a main path out of the ballroom that led us past a few possible safe locations, meaning we always picked up at least one clue before changing to focus on the actual locations. As a result, It became far too easy to take out every key NPC along the way.

Use the map to your advantage

Each time you play this Escalation, the safes will be marked on your map as blue question marks. Ensure you keep checking the map to understand which safe is the best one to go for next. Some are closer than others, yet they may require you to get through a tough trespassing zone. We found that it was easier to clear an entire level of the map of clues before moving onto another one. This tactic allowed us to avoid certain hostile areas in some cases because we had unlocked enough clues to ascertain the identity of Lust’s admirer already.

Keys and weapons are constant

The revamped version of Berlin has new podiums dotted around it. These can have either a key, a crossbow, or an explosive charge on them. These will always be in the same places for every playthrough, so try to learn where these are and include them in your path between safes if possible.

The Serpent’s Tongue is a new crossbow that’s been added to Hitman 3 with this Escalation. You can pick a few of them up around the mission, each of which adds two shots to your ammo supplies. You need to fire the crossbow at an NPC’s face to blind them successfully. Any NPC you blind will only be unable to see you for a few seconds, so be ready to move as soon as you’ve hit them. This weapon is great for preventing an enemy from seeing you open a safe, take out their friend, or just sneak past them.

The Serpent’s Bite is a remote explosive

The Serpent’s Bite is a new remote explosive weapon, added to Hitman 3 with this Escalation. You can throw it, and it’ll stick to whatever it lands on. If this is an NPC, it’ll knock them over first before they get up. Note that if you throw the weapon and an NPC picks it up, you won’t be able to detonate it anymore. The best use of this weapon is blowing up safes when you don’t have enough keys. Be wary, though, because this will draw in guards.

As we’ve alluded to above, you can open a safe in two ways. The first and easiest is by using one of the many keys dotted around Berlin. If you don’t have enough keys, you can use a remote explosive like The Serpent’s Bite. If you’re using a key, try to sneak up to a safe when there’s no one looking. Experiment with throwing items to distract guards for a while to allow you to sneak in, unlock the safe, pick up the clue, and escape to safety. This works much better than if you go in guns blazing.

Everyone in the ballroom drops an item

Once you think you know who Lust’s admirer is, you have the opportunity to kill all the other potential suitors before giving them the bouquet. You can do this subtlely by luring them away one by one and killing them or through some other not-so-subtle methods. Each suitor you kill will drop an item like poison or a gun, making it easier for you to kill the next one. Of course, you’ll pick up items as you explore Berlin and gain clues, but these items give you something more to work with right when you need it.

The ballroom is a death trap. Drinks are lying around that literally anyone could poison, a bathroom stall to drown in, and five massive chandeliers that could drop down at any moment. There’s also a large speaker that could fall onto an NPC if you got the positioning right. Try to use these accident kills that are available around the area. Otherwise, you could end up compromising yourself. Accidental kills can also be noticed by NPCs but won’t prevent you from getting a Silent Assassin rank.

When all the other suitors are dead, it’s time to pick up Lust’s bouquet and give it to them. However, you can’t let them see you kill anyone or catch you doing something illegal. If they become suspicious of you, they’ll run away every time they see you. This is bad because you need them to stand still and hold out their hand so that they can accept the bouquet. If not, the only thing you can do is subdue them, drop them at Lust’s feet, and hope she picks you instead.