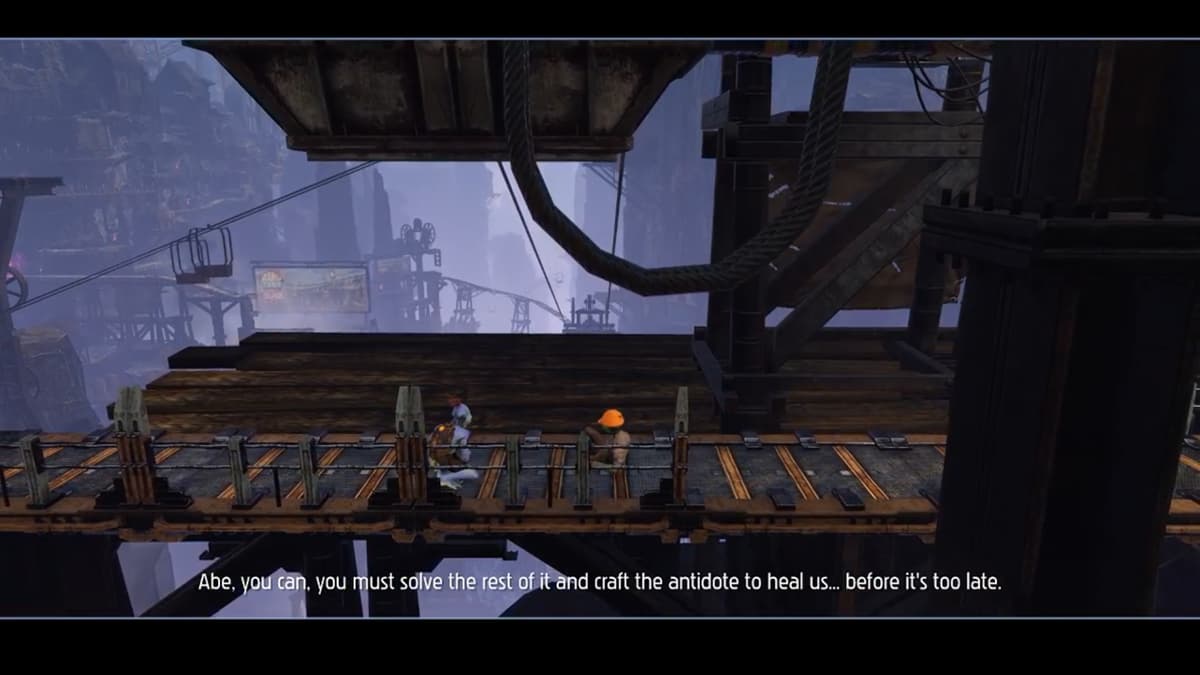 In The Funiculur level in Oddworld: Soulstorm, Abe comes into contact with a group of mudokens plagued with some mysterious illness. As you talk to them all, you begin to realize there is hope for them, but you will need to venture into dark and dangerous caves in search of five different ingredients for a cure that will allow you to aid the ailing mudokens and not only get them to freedom but also let them fix machinations so Abe can progress forward. Here is how to craft the antidote in The Funiculur in Oddworld: Soulstorm.

As stated above, all the ingredients for the antidote are in the mine caverns of this level. The first mudoken that you come across lets you know that Paramolds made him feel better. In this area, two more sick mudokens let you know someone is close to a cure and that the caves hold medicinal ingredients. Go through the gate opened to the far right.

In this first cave, you will be introduced to flares. They will be necessary for your journey through the dark but will run out of fuse after a bit. An alternate means to illuminate the area in front of you is to chant and move the orb forward. It will disappear when the chant ends, but you can get an idea of what is ahead of you.

The first ingredient is found in the beginning portion of this cave. Moongrass will be the most abundant ingredient you come across through this level. When you or your chant orb gets close to it, it will light up.

After you reach the second checkpoint in the cave, you will jump across a gap (there is a secret area below), and in front of a rolling section is some Paramold, the second ingredient for the antidote.

After you power up the generator in the first cave, you can come outside and activate a lever to a second cavern. Talk to the sick mudoken in front of this cave, and he will let you know there are new monsters ahead called Fleeches. He also lets you know their droppings have healed many ailments in the past.

Enter the cave and make your way down in the beginning portion. Even without a flare, you can see the Z’s coming from a couple of fleeches, so be sure to sneak down and to the right to avoid them tearing you apart. Continue along in the cave until you get some Phatoline and power the generator. Below that area is a line of Haggut Moss, our third ingredient for the antidote. After you get the Haggut Moss, walk forward to find the exit.

When you get out of the cave, the generator you started up is powering a new elevator for you. If you go down, you will find a secret area. To continue your progress in the level, go up. At the top is a lever that will open a doorway for you and unleash a couple of saw blades you need to run from. Be sure to jump over crates and get to the other side.

After you get past the saw blade section, there will be another sick mudoken near another cave. Talk to him, and he will let you know some Meetlebats bit him, and he felt better.

Venture into the cave, and you will see another Phatoline generator. If you have some, power it up, and the saw blades throughout the cavern will begin moving back and forth. Above the first set of blades is some Sleech Guano, the fourth ingredient for the antidote.

With the generator-powered up, you need to progress through this cavern, avoiding the sleeches and blades until you activate a switch to open the path for you forward. Behind that door is the final ingredient you need, Meetlebat Venom.

Now you have everything you need for the antidote. Open up the crafting menu with Triangle and select Antidote. While you only need to craft one, this antidote can be applied to all sick mudokens in the level.

Outside the cavern, there is a single sick mudoken that Abe will automatically give the antidote to. He will follow you, and you can have him fix the lift in front of you.

Every time you come across a sick mudoken, hold Square to let Abe heal them. Like the first one, they will follow you until you free them through a bird portal. Press down the D-pad to make them wait and up for them to follow you again. Heal 15 different mudokens in the level, and you will earn the Abe the Healer trophy.