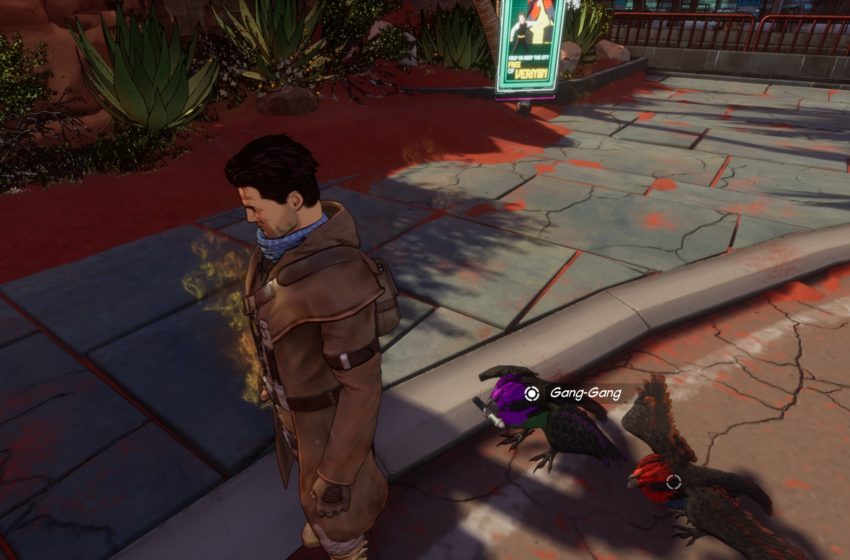 Big Steve, the large purple Gang-gang bird, has Ember’s Deet that he stole when you scared her while she was stealing a U-chip off of a corpse during the start of Beyond a Steel Sky. You now need to steal it from Big Steve to obtain a new U-chip ID to gain access to Union City. You can find him over by the broken bridge that Hobbsworth is fixing.

Before you can steal the Deet from Big Steve, you need to obtain Mini-K’s from the back of Wendell’s truck, but you also need to scare the birds away in front of it. You can do this by speaking with Pixel to learn that his brother Voxel is hiding in the garden, inside the large tire. Approach the tire to talk to Voxel and obtain firecrackers from him. Toss it at the Gang-Gang birds surrounding the back of the truck. After they disperse, speak to Wendell about the secret to open his truck, which is by hitting the bumper, doing a jig, and then pulling the doors open.

Once you have the Mini-K’s, approach Big Steve and choose the ‘lure’ option. The Mini-K’s in your hand will be giving off a distinct stench, and you can lure Big Steve around as long as you don’t sprint too far away from him. You can throw the Mini-K’s on the ground or into any of the dust bins you find, but you can’t grab the Deet. Instead, throw the Mini-K’s at the holographic waterfall to stun Big Steve.

After Big Steve hits the fence, you can pick up Ember’s Deet in front of the waterfall to give it to her and receive a new U-chip.