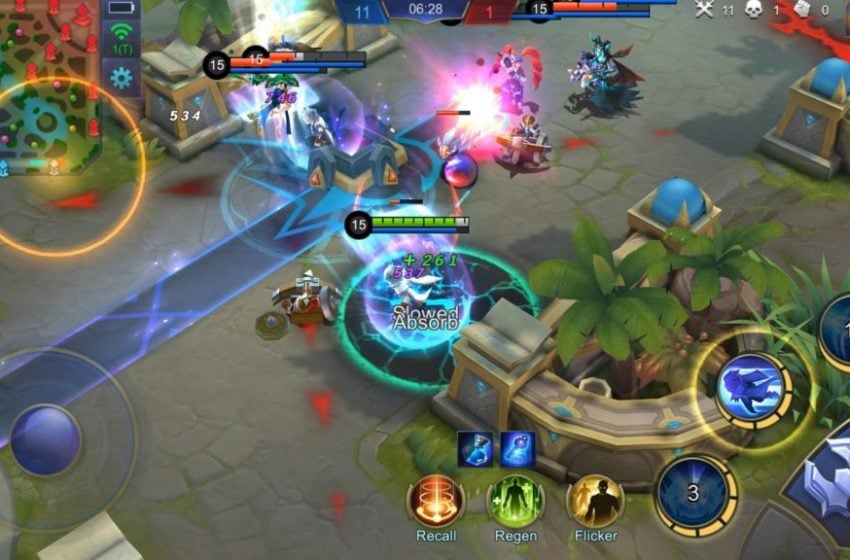 A common trait of the MOBA genre is the jungle. In between each lane are areas where jungle monsters spawn, neutral minions that have no stake in what happens. Like lane minions, jungle creeps grant gold and experience when killed, but more importantly, buffs to health, manage, damage, and cooldowns. As a jungler, it’s your job to target these monsters while popping out occasionally to help secure a kill.

Choosing to ignore the jungle puts your team at a disadvantage, giving the enemy jungler free reign over additional buffs. An enemy player with a single level above you, whether you realize it or not, has a stat advantage that could change the course of the match. This may sound awfully familiar to League of Legends. In fact, any experience you have with jungling translates well into Mobile Legends. However, a bit of deprogramming is necessary. Mobile Legends handles jungling in a similar manner, but is fundamentally different.

Mobile Legends: Bang Bang lacks a jungler role, nor can you exclusively jungle. To do so would put you severely behind your teammates, even costing you the game. This is due to jungle monsters rewarding far less experience and gold. That sounds unproductive, so why bother? The trick is to sneak into the jungle in between minion waves, take out a few jungle monsters, then hightail it back to lane.

That’s not to say some heroes aren’t better at jungling, but at least two players should be hopping in and out of the jungle—especially to hand off buffs. Who it should be is based entirely on your team, and who’s willing. Once someone volunteers or is chosen, setting yourself up is straightforward.

Jungle monsters and what they do

At the start of the match, pick up your preferred jungle item. It’s different based on your role but to make it easier, there’s an entire jungle page at the shop, detailing the various jungle items to choose from. For spells, you’ll be using Mobile Legends’ equivalent to Smite, Retribution, to deal large amounts of damage to jungle monsters. It’ll speed up your route and, in some cases, provide an opportunity to steal a jungle monster should you run into an enemy jungler.

Every jungle monster is worth killing, but a handful are far more valuable for their buffs and utility. You’ll want to prioritize jungle monsters on a case by case basis. Unlike League of Legends, there isn’t a set route to take when jungling—it’s organic. We’ll break up jungle camps based on three categories: common, elite, and legends.

Common jungle creeps are the easiest to kill, but offer the smallest rewards, specifically gold and experience. You won’t get any major buffs from these creatures, but they’ll spawn quickly, providing a great opportunity to bank plenty of gold. Don’t ignore these monsters:

Both the Lithowanderer and Rockursa grant a regeneration effect and healing effect, respectively. The Scaled Lizard and Crammer provide gold. The Crab, however, gives you a small gold buff, granting additional gold over time for a few seconds.

Elite jungle creeps are a step up from common creatures and hand out the best buffs in the game, often referred to as “blue buff” and “red buff,” or “purple buff” and “orange buff.” They’re weak enough to be soloed, and spawn every 45 seconds. Whoever is closest should be handing this buff out to a role that benefits from it the most. Those creatures are:

The Serpent—blue/purple buff—gives the user 10 percent cooldown reduction, and reduces mana and energy usage by 40 percent and 25 percent, respectively. For a magic user, the blue buff is invaluable. The Fiend—red/orange buff—grants the wearer true damage based on a portion of their physical damage. Melee and ranged classes love this buff.

Legendary jungle monsters can be best described as utility. Their death, unlike the other creeps, will grant the entire team gold and experience. Because of that, there are only two:

Out of the two, the Sanctuary Lord is the toughest to come back from. Should you defeat him, he’ll rush into a lane of your choosing, and make a b-line for their base, crushing heroes and turrets on the way. As for the Cryoturtle, you’re rewarded a gold bonus. However, whoever gets the last hit will receive the turtle buff, which is essentially a more powerful version of the red buff.

How you approach each camp is up to you and your team. You aren’t stuck in the same route as everyone else. With that said, choosing to ignore the jungle entirely doesn’t just put you at a disadvantage, it hurts the team as well. By leaving those jungle creeps uncontested, nothing is stopping the enemy team from gobbling up extra gold and experience. Always make an effort to snag a jungle creep or two—especially if it sets you up for a gank.