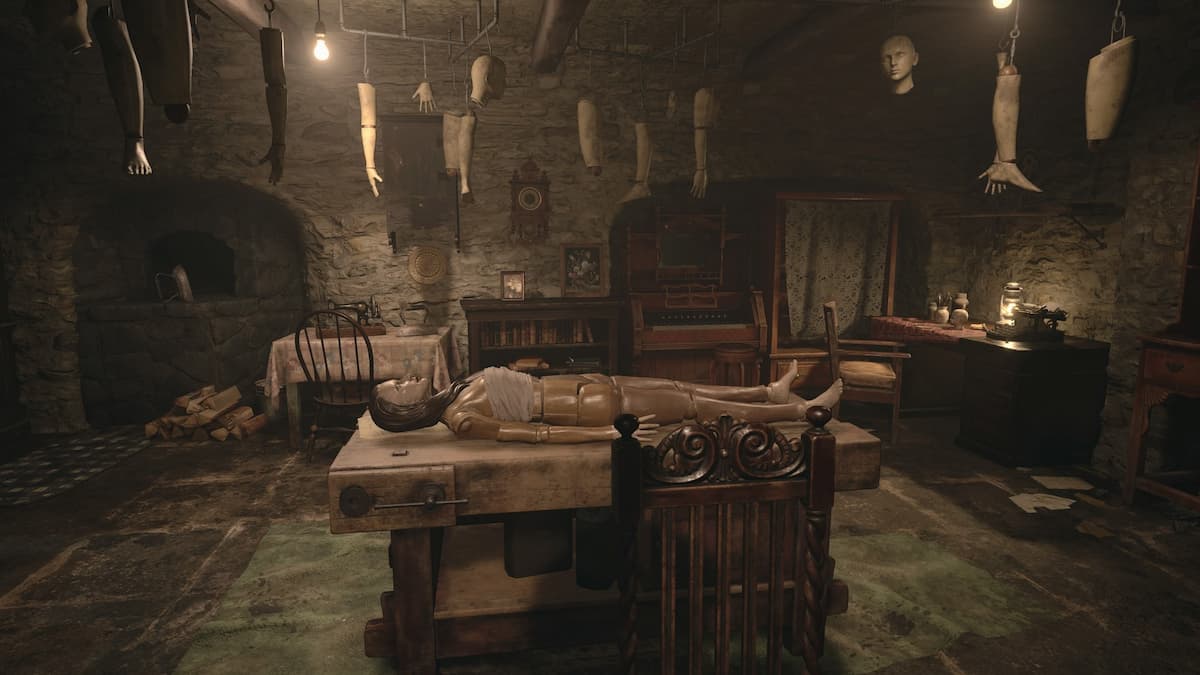 When you enter House Beneviento in Resident Evil Village, it’s a small little home with plenty of heart-warming sights. Unfortunately, it’s run by a bloodthirsty doll who wants you to remain their playmate forever.

When you make your way through this part in the game, you’ll eventually be stuck in a Doll Workshop with a Mannequin in the middle of the room, with all of your items taken away from you. There are not too many options here, other than solving the puzzle to progress the game.

The first thing you need to do is approach the Mannequin lying down in the center of the room and interact with it. By looking down on the bottom, you can examine it and move along its arm until you reach its shoulder, and there’s a part in the Mannequin’s arm that has an opening that you can unlock, dropping out a Silver Key. Hold on to this. Now, interact with the Mannequin again, and you remove its arm, and on the back of its elbow will be three closed eyes in a triangle pattern. While it is not important now, you want to remember this to use in the future.

Next, go on the other side of the Mannequin to interact with their left arm to remove the ring attached to its ring finger. It’s covered in blood. Using the Silver Key you removed it from the Mannequin’s right arm, go over to the locked door to open it into the next room. There’s a faucet in there you can turn on, and then you can clear the bloody ring off. With it cleaned, you can now examine it. There’s the date “052911” inside the band.

With the ring clean, return to the Mannequin and examine its left leg. Upon interacting with it and moving to the knee, you can remove the leg to reveal a winding key. You’re going to need that soon. If you interact with the Mannequin again, you need the remove the bandages from the Mannequin’s chest, and there’s a tool you need to extract what’s inside its mouth. You can also move the Mannequin’s left pupil to reveal it has a symbol of a bird, but you can’t use that now.

The next step is to use the code on the back of the ring on the locked double doors you used to enter the room. You’ll be able to leave the area now, and you need to find a nearby music box to use with the winding key. It’s inside the storage room, which you can naturally reach by walking down the hall. It’s the door that magically opens for you. On the table in this room is the music box.

The music cannot play when you find it. What you need to do is swap out the cylinders to ensure they match. We’ve provided the solution of what it should look like below. The first slot should have a deep cut on the bottom. The cylinder to the right of that should have two cuts in the middle. The middle cylinder should have a cut that makes a ‘V’ sign directly in the middle. The second-to-last cylinder needs to look almost perfect, except for a small cut on the bottom right. The last one needs to have a single cut in the middle. Once you’ve lined them up, play the music box, and it unlocks the tweezers.

You need to return to the room with the Mannequin and use the tweezers on its mouth to remove the item. It’s a small roll of film. You need to take that film and return to where you came down from the elevator and go into the room next to it with the white door.

Inside, there’s a small stand with several film pieces. To the left of that stand is a note. You need to use that note to place the pieces of film in the correct order. The note breaks down what each film strip should be. Here’s the note, and the solution, to the Film Puzzle.

Once you have all five film strips in the correct order, click the play button to play the movie. It’ll show an underground location with a crib, a well, and a ladder. Once the movie is finished, the screen falls to the ground, and you can walk through the hallway. On the right side a doll carrying a pair of scissors. Use those scissors to cut through the ribbon below you, and answer the phone. Now, you can make your back to the room where you used the Silver Key.

You’ll now enter the underground area you saw in the film that you watched. You’ve now completed the larger Mannequin room puzzle, and there’s a new danger hunting you in House Beneviento.