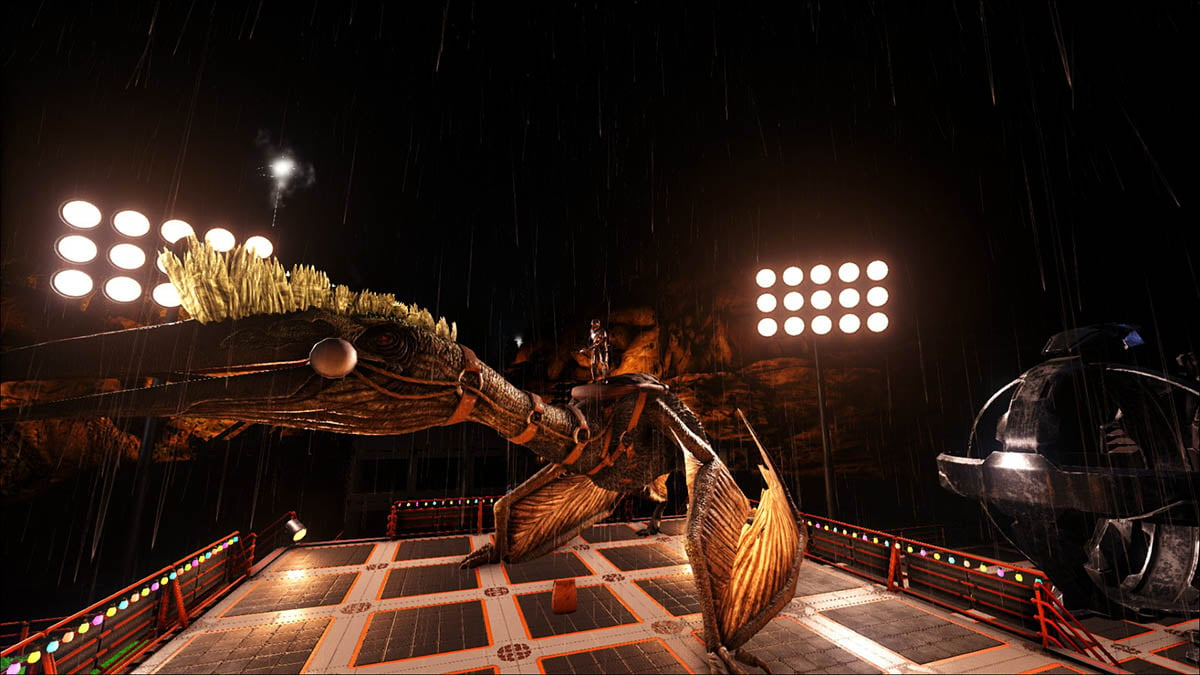 Within Ark: Survival Evolved, the Quetzal is the undisputed royalty of the skies. With the ability to build platforms on it, Quetzal’s can be turned into veritable air fortresses, mobile mining platforms, or even airborne taming hubs.

The hardest part of the Quetz within Ark is grabbing the first one, and there are a few ways that players can manage this, but the more players working together on a Quetz tame, the easier it tends to go.

Regardless of how players opt to tackle the Quetz tame, the concept must be understood. A wild Quetz never lands, meaning the entirety of the torpor-adding part of the tame will happen in mid-air, typically while plummeting to the ground. Once enough torpor is stacked onto the Quetz, it falls immediately to the ground, where players will then need to defend the tame that can take hours to secure.

This first stage can be a frustrating part of the Quetz, and a reason that many players will give up the chase of this massive bird entirely. The Quetzal hitbox is one of the more frustrating aspects of Ark: Survival Evolved, where many shots that land on the bird (noted as seeing a blood spurt on impact) won’t actually hit the bird and invoke torpor. There is a ‘safe’ hitbox that strikes true more often than not, and that’s the core of the Quetzal’s body, although it still doesn’t guarantee success.

If you’re limited on tranquilizers, postpone the Quetzal hunt.

If players can survive the first stage, the second stage offers harrowing issues of its own. Once the Quetz falls from the sky and the taming stage begins, players will need to immediately erect fortifications around the creature, clear the area of any large dinos (rex’s, carno’s, and alpha raptors all pose a massive risk), and watch for bugs that hound unconscious dinos for an easy snack.

For preparation, players should grab the following items:

If solo, add these items:

If with another player, add this item:

Cross-load these items if you’re noticeably struggling with weight limits, but the torpor player must keep the rifle, tranqs, parachutes, and grappling hooks on their person. It’s strongly recommended to be comfortably within the metal tier for weapons and armor, and having a few spare go-bags at the base if and when the first tame goes awry.

The solo Quetzal tame is difficult to do — there are a slew of variables that must be taken into account, and having every possibility accounted for is brutal. Still, for Ark players that don’t play with others, this is the only way possible.

On the ground, have both birds follow the solo tamer at the closest possible interval (interact with the dinosaur, enter the ‘behavior’ tab, and then select ‘lowest’), and mount one of the birds. Once players find a Quetz in the sky, they’ll want to fly their bird above the Quetz, dismount, use the parachute, and fire as many tranqs into the bird as possible. Only engage the bird above safe areas: an unconscious bird falling into the ocean or river will result in a drowned (and dead) Quetzal.

Ideally, players will continue to land shots on the Quetz even while it’s in ‘flee-mode,’ but this will ultimately only hasten the taming experience. It’s possible, if extremely time consuming, to knock the Quetz unconscious by only engaging once flee-mode deactivates, but that can take hours to complete a tame with that process.

Note: It seems possible to utilize bolas to knock the Quetzal out of the air. Due seemingly to hitbox issues, this technique has never worked properly in personal experience, even when parachuting onto the bird itself.

If you have friends on the same server, taming a Quetz can be a far easier tasking: one player flies a bird with high stamina, and the other is clutched in its talons and engaging the Quetzal until it falls. Parachutes and the like aren’t necessary here, but be cautious when engaging: it isn’t uncommon to accidentally shoot the bird that is carrying you, ending the hunt in spectacular fashion.

Once the Quetz recoils and falls flat in mid-air, the bird is effectively unconscious and will begin falling to the ground. Speed down to the ground and begin clearing the area as quickly as is safely possible: grab the fiber from storage, cut some trees, and start building spikes to build a makeshift perimeter around the bird. These tames can take a while to complete, but having a carnivore come through your tame and take a chunk out of it is frustrating.

Once wooden stakes have developed a perimeter, supplement your hasty fortification with torches (unless you’re playing on a PvP-enabled server) to help see through the night and stave off any possible predators. This taming process will go much faster if you can source raw prime meat, but be cognizant of the risk/reward: dying to a large creature could result in players losing their tame entirely, which is ostensibly worse than the tame taking time.

If two players are engaged in the hunt, one should babysit the unconscious Quetzal (keeping it unconscious and safe) while the other hunts from raw prime meat in the area. Using flare guns can help guide the hunter back toward the tame, but it may also bring unwanted attention to the tame area.