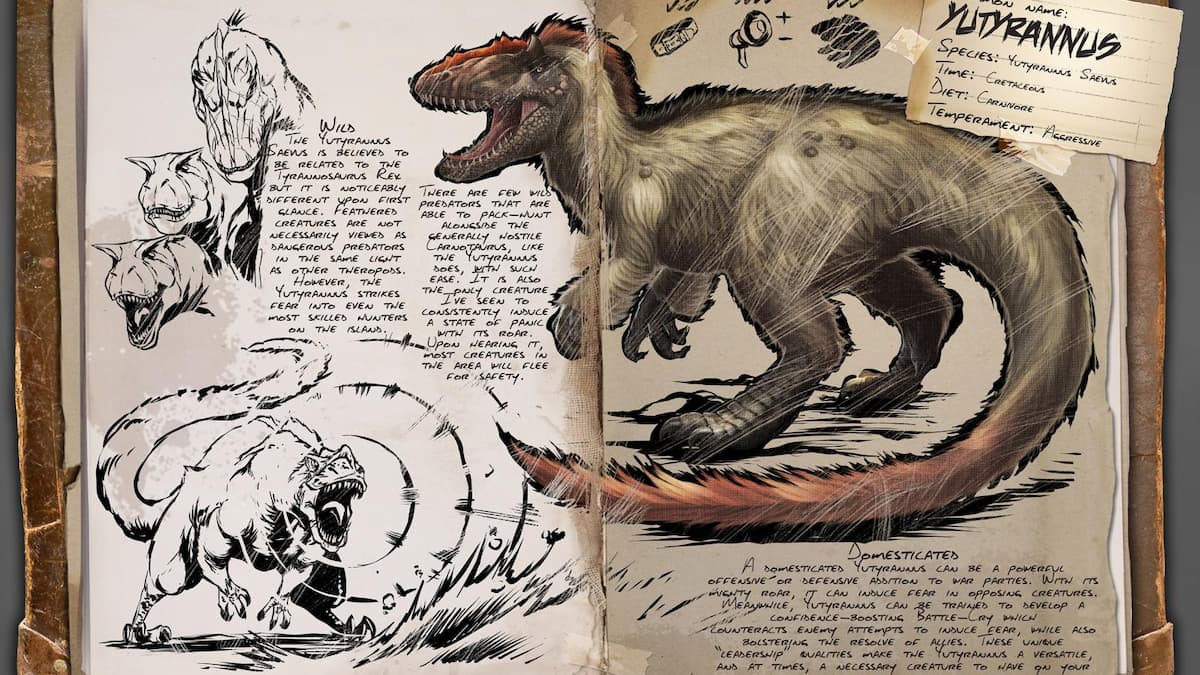 In Ark: Survival Evolved, nothing is as important as having the right tools and creatures for the job. The survival game is bound to how well you can gather what you need and tame the creatures to do it. Nearly everything in Ark comes down to game knowledge and implementing it. The ultimate goal of Ark? To survive and beat the bosses, which is often easier said than done. To do this, you’ll need an elite team of dinos, and there’s one that should always be in your team. The mighty screaming dinosaur, the Yutyrannus. This is the best and easiest way to solo or tribe tame a Yuty in Ark: Survival Evolved.

Why you need a Yutyrannus in Ark: Survival Evolved

Apart from being a very feathery version of the Rex and one of the worst creatures to transport pre-Cryopod, the Yuty is invaluable. Whether it’s as a PvE tame or in PvP situations, every single tribe should have at least one Yuty on their roster. The Yutyrannus has two main purposes once tamed. The first is a buff-roar, which grants a 25% increase to damage dealt, and a 25% reduction to received damage for all dinosaurs in the buff zone. While it takes multiple roars to buff your team to full, the buffs themselves are game-changers. Its second roar is a fear-inducing one. It scares off smaller tames and, after a while, larger ones too, which can help a lot if your turret tower is being c-spun by a Pteranadon.

Related: How to tame the Fjordhawk in Ark: Survival Evolved

How to tame the Yutyrannus in Ark Survival Evolved

There are different ways to tame this feathery singer, but the simplest is the best. To tame it, you’ll need the following structures to build a trap, and items to tame it once it’s trapped:

Place the Foundations in a 2×2 square, and stack the Doorframes at each junction 2x high. You’ll need need to choose a side to place your stairs. There’s no recommended side, just so long as the Yuty can access them.

From there, you’ll want to hop on your Pteranadon and lure in your Yuty. It’s easier to shoot it once, then hop on your Pteranadon than get close as you’ll likely get feared by the roar. Lead the Yutyrannus and its multiple Carnotaurus friends to your trap now that they are aggressive to you. Make sure you apply your pathing up the stairs and land on the opposite side of the trap. They should all follow your path and fall into the box. If they don’t, repeat the lure again.

Once in the trap, you can kill off the Carnos and safely tame the Yutyrannus.