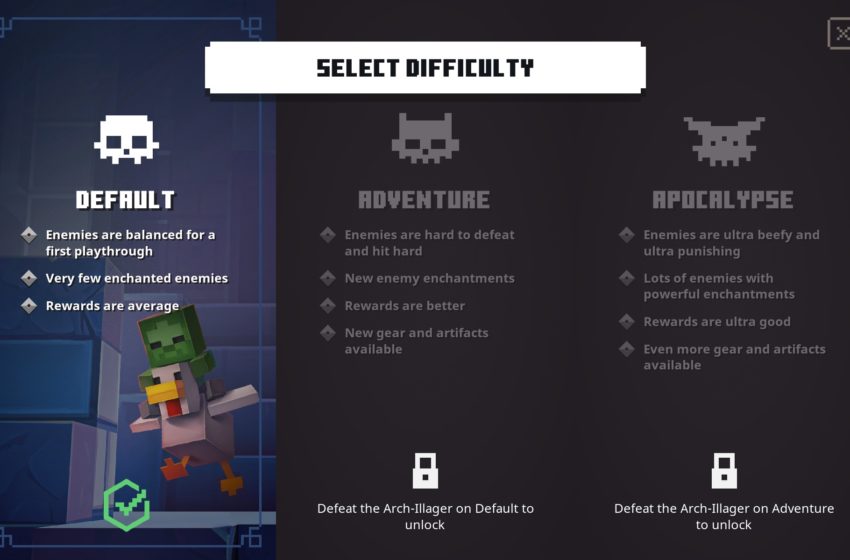 There are three different difficulties available for you in Minecraft Dungeons. A difficulty setting determines the type of loot you obtain in the game. The higher up you go, the more, better rewards you will receive for undertaking the harder bosses and minions. Everyone has access to the first one, Default, but the other two, Adventure and Apocalypse, are significantly harder.

You gain access to Adventure and Apocalypse by defeating the final boss in each of the games. Once you take that one down, the difficulty above your current one becomes available. First, players will unlock Adventure, and then they will need to play through that mode all the way until the end to gain access to Apocalypse.

The enemies will be significantly stronger in the game. They will be harder to defeat, hit you for more damage, and have enchanted items on them. The enchantments work like the ones you gain on your weapons, where they have special effects and do unique things. You want to watch out for these enemies because they can likely hit extraordinarily hard, and have special effects to them.

All of the levels in each difficulty have different scales. For levels, you can increase them by gaining additional gear power. Gear power is determined by the level of your items and their special effects. You can gain access to more powerful gear by doing missions on a higher level, which means even if you make it to the end of a game you can go back to the first mission and do it on the highest settings.