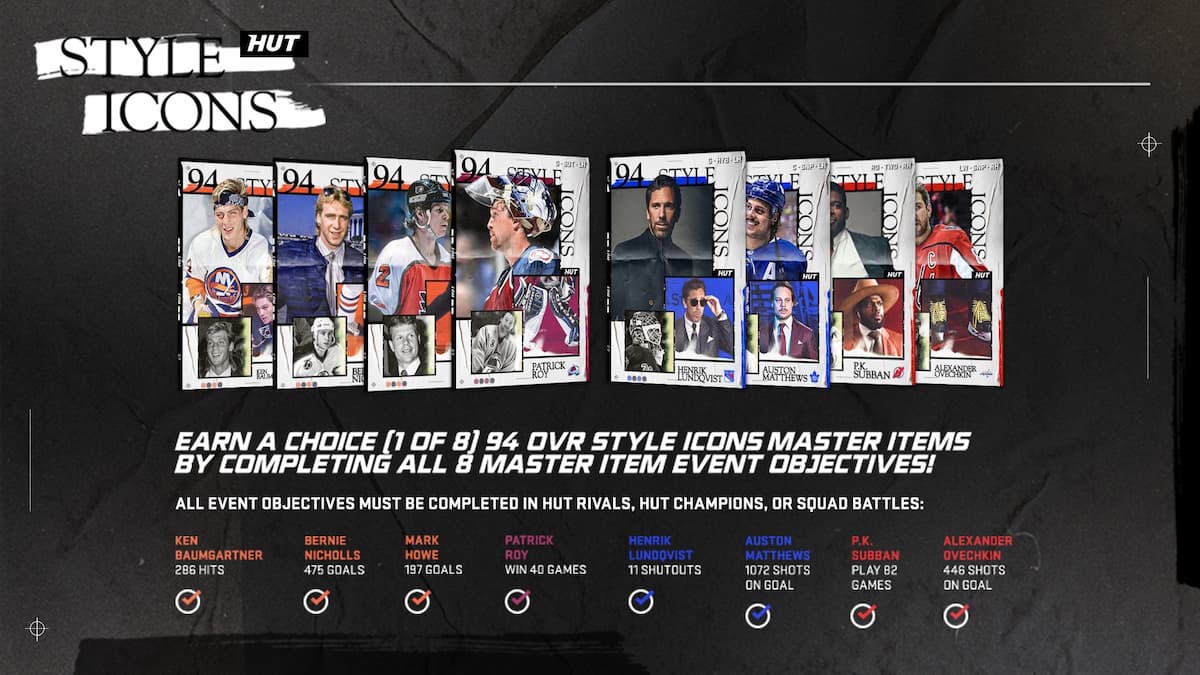 On February 26, EA Sports and the NHL team rolled out the HUT Style Icon event in the Hockey Ultimate Team. This event, designed to honor some of the most stylish players and personalities both on and off the ice, included new cards, Master sets, as well as a special Event Objectives challenge. The NHL team has seemingly taken a page out of the FIFA 21 playbook, as NHL players will have a chance to get a 94 OVR Master item through completing objectives. Here’s how you can do just that.

For this event, NHL players will have the chance to select one of eight different 94 OVR HUT Style Icon Master player items. The eight players are as follows:

To get one of these cards, NHL users will need to complete eight different cumulative objectives, with each of them having something to do with the Master players. NHL players will need to accomplish the following in HUT:

Each objective, upon completion, will yield 2,500 Coins. In total, 20,000 Coins can be obtained just by completing the eight objectives.

Note: All of this is cumulative, and none of the stats you may have acquired previously apply to these objectives. Second, any players will suffice for this challenge. Even though each of the objectives has a player listed next to it, you actually won’t need a Henrik Lundqvist or P.K. Subban on your roster to complete this challenge.

Lastly, NHL players can complete this challenge by hitting these marks in three modes: HUT Rivals. HUT Champions, and Squad Battles. You can mix and match if you want, meaning that you can play some games in Rivals, others in Squads, and put those numbers together and complete the challenge. Although, we recommend that you try to complete this in Squad Battles on Rookie difficulty. This should allow you to score goals quickly, rack up shutouts, and get games in fast. The 82 games objective will take the longest, though, but if you play Rivals and Squad Battles regularly, it shouldn’t be a problem to do.

If you need to track your progress for this challenge, select the Objectives tab on the bottom-right side of the HUT Main Menu, while in the HUT Central section. Then, stay on the Objectives section and scroll down until you see the Style Icon Event Objectives.

This challenge expires on September 1.