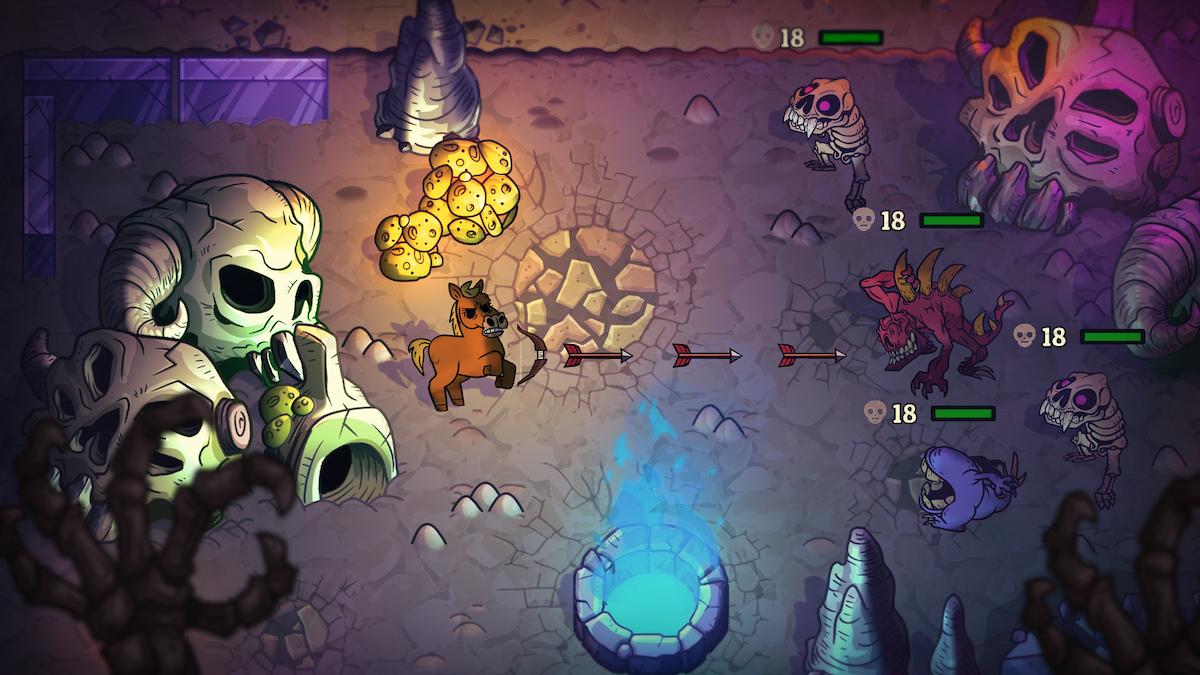 Nobody Saves the World is primarily built around combat. Defeating enemies is how you complete quests, conquer dungeons, and advance through the story. Combat can be quite challenging at times, mainly due to the vast amount of enemies that will be thrown your way, many of whom will be protected by Elemental Wards. This guide will offer a few tips on gaining the upper hand while fighting in Nobody Saves the World.

When moving your character around, the direction they’re facing will normally change to match whichever direction you’re moving them in. However, if you hold RT while moving, you’ll still be able to move in whatever direction you please, but your character will remain facing whichever direction they were when RT was pressed. This action allows you to strafe around enemies and/or enemy projectiles, making it incredibly useful for ranged combat encounters. When playing as ranged attackers like the Ranger, Slug, or Mermaid, you can use this to ensure you’re always facing your enemy, which should make firing at them a tad easier.

A few hours into the game, you’ll encounter an anthropomorphic hammer named Marty Joe, who will fortify your wand, allowing you to customize your forms’ active and passive abilities with abilities from other forms. For example, you can equip the Guard form with the Rat form’s “Consume” move.

Using this mechanic, you can diversify each form’s moveset with all types of elemental moves. The four elemental types are listed below:

As each form levels up, they’ll gain more ability slots; the maximum a form can have is four active ability slots, and four passive ability slots. As there are four ability types and four active abilities afforded per form, we recommend outfitting each form with one move of each type. Certain enemies are protected by Elemental Wards, which are effectively shields that can only be broken after being hit by a certain type of elemental attack. Varying your moveset should make Warded enemies a non-issue.

Nobody Saves the World features a healthy variety of forms, and you’ll likely switch between them constantly throughout the game. While you can do this by pausing the game and visiting the form selection menu, you can also quickly switch between the last eight forms used by holding down the right bumper, which will pull up a “form wheel,” akin to a weapon wheel seen in other games. From here, you can use the left analog stick to select which form you would like to switch to.

This can be pretty useful if you want to switch forms mid-fight, but don’t want to interrupt the flow of combat. It’s a lot quicker and more intuitive than pausing the game and navigating through menu tabs. However, there is a catch: The game will not pause or slow down while the wheel is open, meaning you’ll have to make a quick decision about which form to take if opting to transform in the middle of combat.

Dungeons are easily the hardest areas in Nobody Saves the World. The dangerous bosses aside, they also house various high-leveled enemies protected by all manner of Elemental Wards. However, you can see what a dungeon has in store for you before entering it. Upon discovering a dungeon, you should be able to see what level its enemies will be, as well as what Wards its enemies will have. You can view this information on the map by hovering your cursor over dungeons.

Additionally, you can also see what status effects each dungeon has, if any. For example, the Depleted Mines dungeon, notably, has no health pickups, while the Witch Queen Catacombs dungeon heals enemies’ health any time you use a healing item.

Be Mindful of Quests

Completing quests is how you level up in Nobody Saves the World. Each completed quest yields form power (FP) and experience points (XP), which are used to level up your forms and base stats, respectively. These quests are typically combat-focused challenges requiring you to use each form’s special abilities.

When engaging enemies, we recommend checking what active quests you have, and trying to complete them out as soon as possible. You can quickly check active quests by holding the LB button, which will cause a quest menu to pop up. The more quests you complete, the more powerful you’ll become, and the more effective you’ll be in combat.