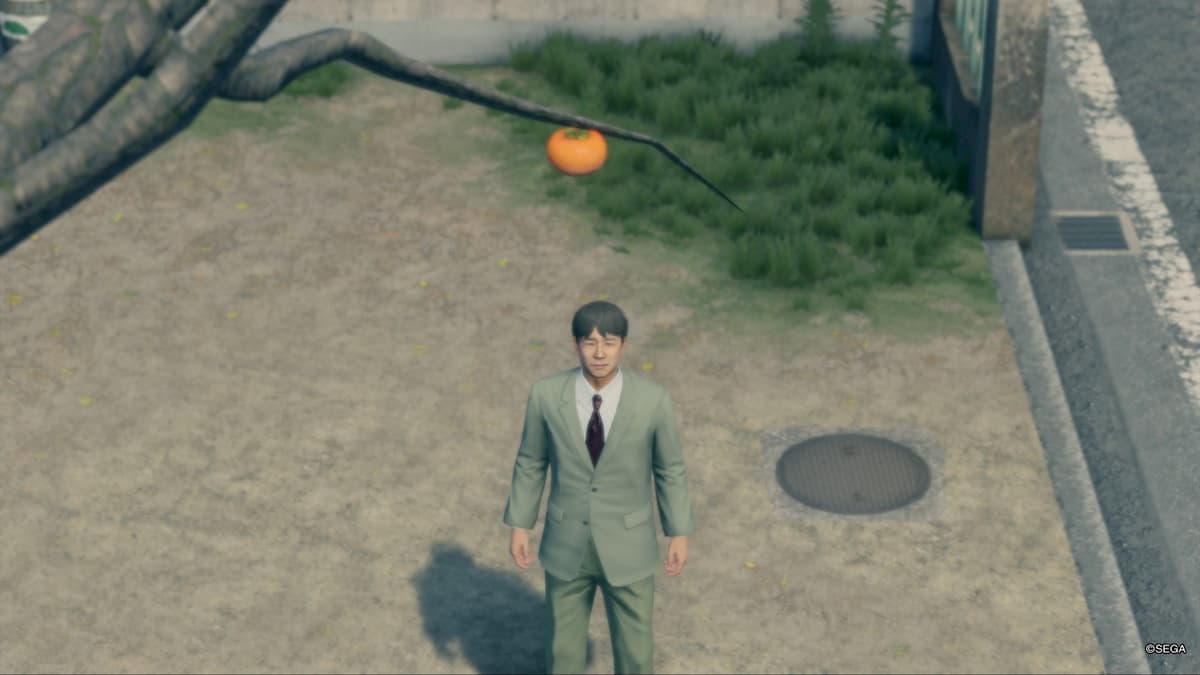 The Persimmon Premonition side quest in Yakuza: Like a Dragon occurs on Yokohama’s west side, in the bar district. It’s right next to the Survive bar, a hangout for you and your party members to have drinks and relax with each other. Outside, there’s a vacant lot with a large tree there. When you walk over there when there’s a chat box available, the Persimmon Premonition quest activates, and you enter the cutscene.

The cutscene features a girl in a wheelchair with a handler taking her out for a walk. They speak to Kusuga about the vacant lot and how the large tree growing there has a single piece of fruit. The young girl in the wheelchair, who is dying, sees it as the only thing that she values and wishes for the fruit to never fall to recover from her illness. After the cutscene, there are no details about what to do next for the side quest. To progress with it, you need to return to this location after leaving the area and then returning. Typically a fight with enemies nearby allows you to progress the side quest.

When you come back, the man pushing the little girl will be standing there, and it will only be him. He’ll explain the girl in the wheelchair, his daughter, is resting for surgery, and how she has good days with her illness and bad days. He’s worried that if the persimmon falls, his daughter’s health will fail, and she’ll die. Kasuga promises to do his best to protect the fruit from falling to ensure the daughter makes it through. Like last time, after the cutscene ends, walk away from the location and then return to it.

This time when you return, a Sumo Wrestler will be bashing against the base of the persimmon tree, attempting to practice for their next match. The Sumo Wrestler lost their practice partner, so they need to use the tree to become stronger. After trying to get him to leave, he’ll start a fight with you. Once you beat him, the Sumo Wrestler commends your fighting style, and how you’re protecting the tree. You now have to leave the area, do a quick activity, and then return to it to progress in the side quest.

When you return, a Sniper Assailant will be attacking you from the roof using toy bullets. You’ll rush up to the next floor and discover the person shooting the rifle was merely using their new toy, as they’re a military fanboy who has always wanted a bolt-action rifle like the one he was holding. The two of you will continue to disagree until you come to blows about it, and you take him down. When you return to the tree, you again have to leave the area, do a small activity, and then return to continue the quest.

When you return, a man is attempting to cast a hex on his girlfriend who cheated on him. Like the other ones you’ve encountered, you have to fight this person and trigger the next cutscene. After defeating him, you learn that the girl he was attempting to cast the hex on definitely is not his girlfriend. Like the others, he’ll leave, and you have to leave the area, do another activity, and then return.

This time when you return, Shibuya and Kanako will visit you. Kanako will not be in the wheelchair, and she’ll be fully walking. Kanako will thank you for keeping the Persimmon safe this entire time. With the completion of the surgery, Kasugo suggests eating the fruit. The two of you share it. That is the end of the quest, and you receive a new Poundmate to call on during combat.