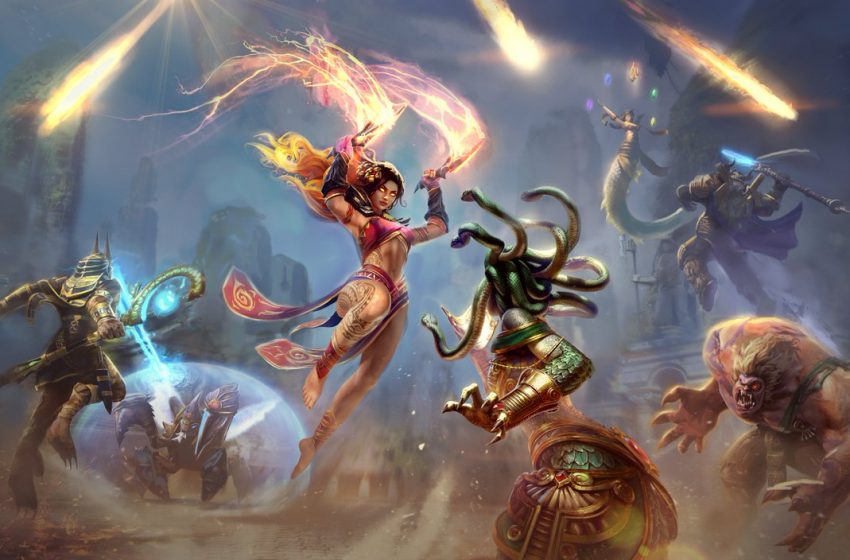 In the Battleground of the Gods, no-one is taken prisoner. The wars rage on, as the ancient pantheons of history battle it out for supremacy of the ancient three lanes and jungle collectively known as Smite’s Conquest. Like every game in the MOBA genre, certain characters present a better proposition in the fight against the enemy, and here we will present those Gods whose ability kit and power potential offer players the best chance of victory, even if you’re a complete beginner.

For this list, we will be using the Conquest mode as a baseline as it is the main mode of the game. Here are the best Gods in Smite by class.

Guardians are the tanky characters that can take more hits but deal less damage, often taking up the supporting role in the due lane of the Conquest map, though more aggressive, higher damage ones can play the jungle role. Some players can modify a playstyle and build for a Guardian to make them suitable for the solo lane role, too.

Cerberus can be an aggressive Guardian who can assist their lane partner or be used in the solo lane. Its passive allows Cerberus to receive a small portion of healing every time an enemy god heals near it, and it also reduces that god’s healing ability by 20%. By having an anti-heal passive, Cerberus is one of the more celebrated gods to ensure the enemy team can’t outlast you. It also features an array of crowd control abilities that is perfect for starting any team fight. It’s a difficult god to master, though.

Sylvanus is one of the few Guardians to have a ranged basic attack, and it’s also an area of effect. In Season 8, players have started to give Sylvanus Manikin Sceptor, doubling down on this god’s basic attack, turning it into a lane pushing machine. One of its primary abilities is an area heal that is also a welcome sight for any team that needs help surviving in the jungle or to sustain a troublesome lane. For those who are aggressive enough to optimize on Sylvanus’ ultimate attack, you can start and decide team fights and survive being the primary target of any enemy assault.

For those who prefer healing as a support character, Yemoja is one of the best gods to do this as a Guardian. Not only does she have an ability to heal an ally and those around them and apply a shield to the ally she hits, but her basics provide minor heals. They pass through allies, healing them and damaging the enemies on the other end. A player who can master those basic attacks will be good with her. But a player who can master her riptide movement speed ability will be amazing with her.

These make or break a battle based on their placement, and if the riptide is placed the enemy or ally god forward, or backward. Knowing how to activate these and use them in the jungle can be challenging, but it’s a small technique to learn with Yemoja to truly master her and makes her a deadly force on any team.

Mages are damage dealers that often take on the role of the middle lane, crucial for ensuring that the enemy team’s jungler doesn’t overrun your camps and get too far ahead of the game. However, Mages can also be useful in the Solo lane and even more rarely, in the jungle role.

Merlin is an interesting character in Smite. He’s not a god, but he’s carved in mythology as one of the greatest wizards of all time. As a wizard, he has access to multiple spells, and his ability kit reflects this. His ultimate allows him to switch between overload, fire, and ice. Each stance change features a unique trio of magical abilities. The first ability is always a lane clear. The second is an area of effect attack. The third will be a teleportation spell that Merlin can use to escape. You’ll need to master how to swap between these three types of spells, and be able to memorize his rotation, and what spells will be available.

Nu Wa is one of the much older goddesses in Smite. She’s had several ups and downs throughout her career, but in Season 8, she’s a bright light for any player interested in mastering the middle lane role. She has a straightforward lane clear ability, and then a critical minion that, if landedp properly, does wonderful burst damage to a target and stuns them. To top it all off, her ultimate targets all members of the enemy team and damages them with the attack. For those who can learn to master her, Nu Wa is a huge threat on the battlegrounds, especially with the new starter items.

Scylla will always be an old favorite to everyone in Smite. She has incredible mobility, fantastic burst potential, and she can clear her lane in a single ability. She’s a little difficult to master, given how squishy she is. Overall, Scylla is incredible and can decimate an entire team that doesn’t notice she just fired off her ultimate. There are some downsides to her, such as not being able to land her abilities and being left out of the open. You have to balance your aggression with caution.

Warriors are melee fighters that combine a good amount of sustain with solid damage and carry ability kits for team fights and aggressive gameplay. They are the most common class in the solo lane, but the ones who deal more damage can be used in the jungle, and the ones with more health and defenses, can fill the support role.

Achilles, the most handsome and skilled warrior in the world, he had only one weakness: his ego. His passive makes him a versatile character, capable of being more damaged and movement based, or heavily armored with increased defenses. How you balance those stats is up to you, every time you return to the fountain. While his armor changes, his abilities remain the same, and with the ability to heal himself, he’s a difficult foe to take down. If an enemy becomes low enough, his ultimate is an execute, making him a fearsome opponent to try and outlast.

King Arthur is another technical god that players will initially struggle to master. His passive prevents him from increasing his attack speed, and he has to instead rely on his steadfast meter to gauge if he can do a more powerful ultimate attack or not. That portion can be a bit difficult wait for, but his abilities are truly powerful. He’ll swap stances similar to Tyr, except to do so he has to use an ability, readying another at the same time. If you can balance how much mana he uses, and giving him enough defenses to still do reliable damage, a lot of players will struggle to take him down. Also, giving him Bluestone pendant as a starter item makes him difficult face in the solo lane.

If you prefer to use a warrior in the jungle, Osiris does an excellent job. He has the additional defenses and health increases you’d expect from a warrior, but you can build him with damage and attack speed items to make him a truly terrifying attacker. He doesn’t have the same gank potential as other assassins do in the way of having an ultimate that he can use across the map, but he’s extremely reliable in fights. He can clear jungle camps pretty fast, allowing him to rack up levels pretty quickly, and he can be extremely flexible.

Assassins are high damage, high mobility characters that don’t have a lot of health but excel at exploiting enemies on the back foot. The assassins usually play in the jungle role, but flexible players can build them to work in the solo lane, granted they know how to outplay their opponent.

If you’re not afraid to get real close to your enemies and chase them down, Arachne is the assassin for you. She primarily functions as a single target queen, capable of destroying a target who strays too far from the pack. Two of her three primary abilities make up her basic attacks, so you want to increase her attack speed and basic attack damage whenever possible. Her ultimate is a good getaway and allows her to jump down on any unsuspecting opponents. She can be challenging given how squishy she is, though.

Nemesis is a goddess capable of taking a few hits and throwing it right back at you. Like Arachne, she’s capable of chasing down enemies in the jungle and getting to them before they reach the safety of their tower. Her shield allows her to be a little risky with her engagements as it allows her to regain her health and damages the enemies that attack her, but it only works for a small amount of time. She leans on her basic attacks, requiring one item to increase her defenses.

If you enjoy playing Mages because of how much burst potential they have, then Pele will be a good fit for you. She has the power to make a god go from full health straight to zero with a few basic attacks and popping the correct abilities. She has excellent chase potential, but only for a small amount of time with her third ability. She can jump up in levels if you play your cards correctly and go through penetration, so you can modify what works best for your team.

Hunters are one of the main damage dealers in the game along with mages, providing consistent, moderate damage from auto-attacks and abilities often without huge burst potential outside of ultimates, though at the cost of more utility-based abilities. They are the second of the two-man team in the duo lane along with the support, though they can also be deployed in the mid and solo lane.

Danzaburou is one of the new gods from 2020. His kit makes it easy for him to chase down enemies, escape, and burst them down using his sake bottle in combination with his money bags. Before Season 8, he struggled with balancing his mana and lifesteal needs, but with the new starter items, you can go straight into Transcendence and then transition into attack speed. Danzaburou needs quite a bit of mana, so you want to make sure that you watch your ability use.

Skill shots can be challenging in Smite, and Hou Yi can be complicated. He has an arrow strike that can bounce off walls three, go through targets, and do additional damage to them. They’ll take even more damage and be stunned if he has his mark on them before he hits them. His entire kit revolves around that mark and making sure it’s active on your true target can be a bit annoying. Although, it’s extremely crucial. You can craft a decent critical strike chance, and attack speed build to do some heavy damage.

If you prefer to use basic attacks and sneak around, Izanami is brilliant at this. She can enhance her basic attacks to do quite a bit of damage, and they pass through enemy gods and minions, returning to her to do twice the damage. However, her basic attacks don’t do as much as traditional hunters, so you have to be careful when using her because of that. One of her abilities allows her to enter stealth, making her one of the extremely few gods in Smite that can go invisible and not be seen. If you master that, place her abilities to lane clear, and split push with your allies, you can win against most teams, along with organized strategy.