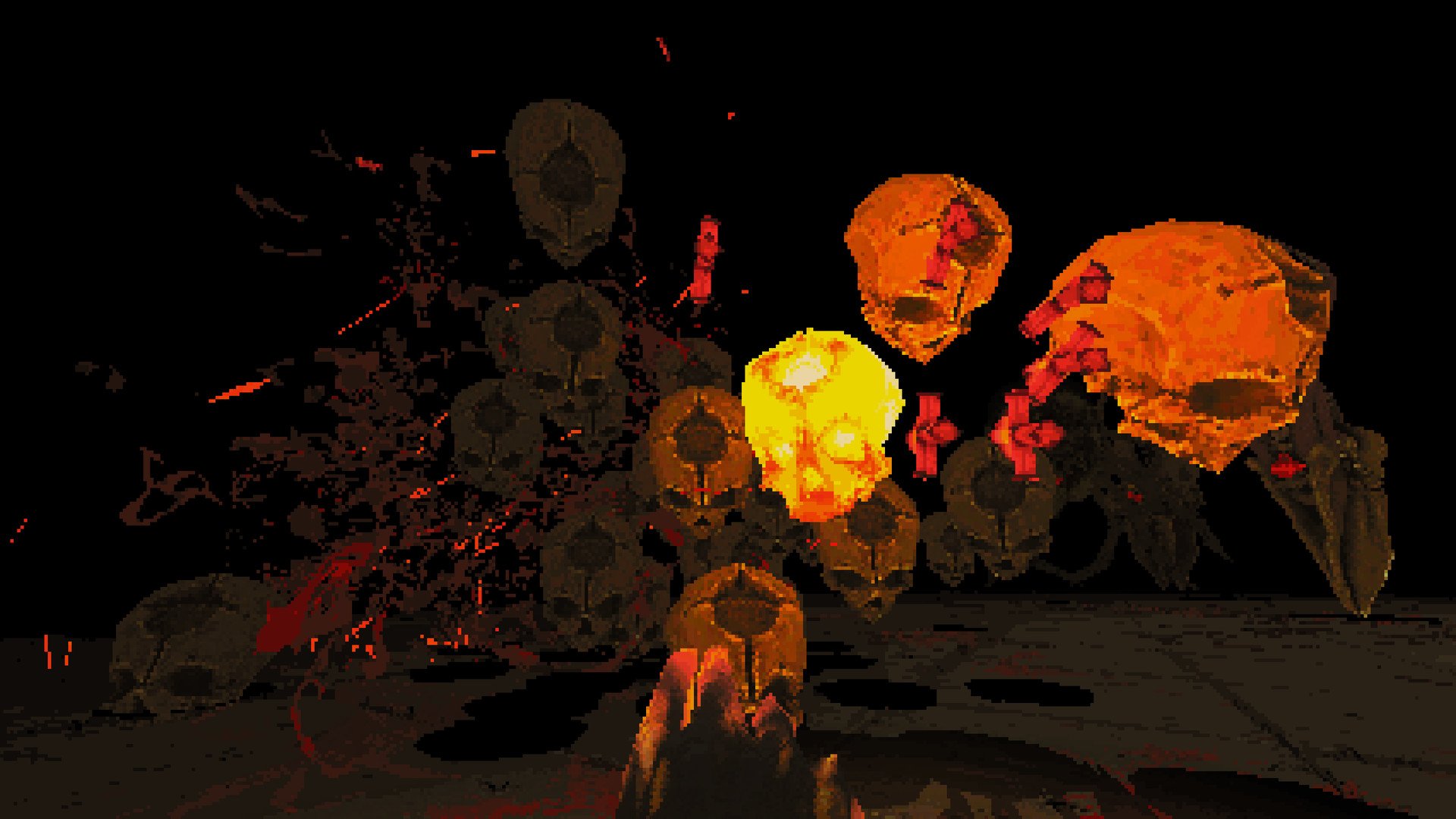 We know how it is. Sometimes your available memory on your PC or mobile is just feeling the pinch, but you still want something new to play. When you can’t squeeze the latest blockbuster into your memory, there are lots of great games with smaller footprints that you can play. In this article, we will be going through some great low storage games. These games may be small in size, but they are big in fun, so prepare to have a good time if you download any of them.

Downwell only needs 200MB of space to fit on your PC. Prepare to descend a well with just your trusty rocket-boots for company. The boots control your descent, while also killing enemies, and it is up to you to grab as much loot as you can. You can level up and buy new items in shops that happen to exist down this well, and the gameplay loop is addictive and fun. You should play this even if you have plenty of available space.

Devil Daggers feels like a fever dream where you are being attacked by the Ghost of Christmas Past with a baseball bat with nails in it. A fast-paced shooter, the game consists of one level, and the enemies are always in the same place. The aim of the game here is perfection, and your eyes and ears will need to work closely together to keep you alive. Your single weapon and some secret mechanics are all you have. This is about wits and skill. You also only need 1024MB to fit this onto your hard drive.

I promise you that it is pure coincidence that the first three games all start with the letter “d.” I’ll try to shake up my alphabet application from here on out. Still, Doom will fit on your PC and only take up about 17MB. It’s still good, all these years later, and is always worth playing. If you have never played it, then shame on you. This is history. Gory, glorious past.

Pixel Piracy puts you in command of your pirate ship. You need to recruit some salty seadogs, customize your ship, and then set off in search of treasure. The game had a bit of a rough launch but has been dramatically improved by some systemic updates. It only takes up 200MB of space as well, so fits the bill quite nicely if you are low on space.

Brigador clocks in at about 1GB in size, and is a game I will recommend any chance I get. You play the titular Brigador, and it is your job to smash up cities in your mech suit. The game oozes 80s styles for those who like this classic cinema with a slice of neon on the side, and the soundtrack is just superb.

One of the best games of the last decade, Shovel Knight takes up a mere 250MB of space. There is some form of sorcery at play here, as no game this good should be so small. A Metroidvania RPG with some seriously on point pixel-art graphics, I cannot say enough good things about this game. There is so much content here that it will keep you going for a very long time.

Dead Cells with take up a mere 500MB, and is one of the best roguelike platformers to have released in years. Superbly crisp combat, this 2D Metroidvania game has endless replay value. While it is difficult, it is not heartless, as unlocked weapons and items enter into a pool of random drops for each run. I’ve got about 200 hours in this, and don’t plan on stopping any time soon.

Another game that clocks in at just under 1GB, Nex Machina is one of the perfect games I have ever played. Perfectly formulated and conceived bullet-hell fun, believe me when I say that the movement is crisp and the hit detection is pixel perfect. Great options for people to set their difficulty, and a seriously addictive game-loop. You will play it, then be obsessed with perfecting it.

One of the best roguelike games of recent times, Spelunky clocks in at a mere 270MB, making it the perfect game if you need something that will provide hours of entertainment with a tiny footprint. A randomly generated platformer, you will be exploring dark tombs, trying to save your friends, and trying to survive an assortment of monsters and traps. You might even rob a shop or two.

To bring a bit of tactical nuance to the list, Into the Breach will take just 200MB, and provide you with one of the best tactical and strategic experience of the last five years. Into the Breach mixes things up by always showing you what your enemies will do, it is up to you to plan the perfect moves to avoid the carnage.

Papers Please is something of a name-making game for developer Lucas Pope. In a dystopic hellhole, you win the employment lottery. Your job? To ensure the misery of everyone else. Will you allow your feelings to get in the way of the work, even if it means your own family goes cold and hungry?

If you have never been one to shy away from tough gameplay, a bit of technicolor violence, and a healthy existential crisis, then Hotline Miami is still an all-time classic. While there has been a sequel, the original game is just the superior offering.

Factorio is almost too big for this list, clocking it a 3 GB, but frankly it is worth deleting something for. The last game on the list for PC, and possibly the last game you will ever need to buy. Complex system management becomes hyper-addictive thank to Wube Software LTD.’s impressive work on this glorious basebuilding and resource management game. It is best not to install this one if you have anything you really need to do over the next few months.

Mekorama (Android and iOS) is a 3D puzzle game where you control a small robot and try and solve some pretty complex puzzles. It has a beautiful visual style, a chill soundtrack, and even a built-in puzzle builder so that you can create new levels and share them with other players. It’s a free game, with no requirement to be online to play, making it about as consumer friendly as you can get in the mobile space.

2048 (Android and iOS) is a very well known game, but it deserves a place on any list. A math puzzle game that requires you to combine tiles of similar value to create larger values, while every move you make adds another tile to the board. Another game that can be played without an internet connection, so if you find yourself in a dead zone for your mobile service provider, this can always keep you company.

Zombie Smasher (Android and iOS) is a low footprint take on Plants Vs. Zombies. You’ll need to tap the screen to smash up the zombies before they can reach you, but you need to make sure you are not squashing the innocent people who are running away from the horde. A good take on a clicker game can be pretty addictive too.

In ZigZag (Android and iOS), you need to tap the screen to move a ball along a rather dangerous path and collect gems. As you get further, your score will climb, and the desire to beat your records will start to kick in. You need quick reflexes and a sound awareness of that path ahead.

In Flow Free (Android and iOS), you need to join the dots by drawing lines between them. Connect all the dots, and you will move to the next screen. It merely sounds until you realize that lines cannot travel through each other. Different grid sizes provide different difficulty levels, and it’s a fun game to get your brain working.

Chess.com (Android and iOS) have been doing a lot to push chess as a viable way to spend your time, not just a game for older folks. This is a great way to develop tactical reasoning skills, patience, and forethought; this is a great program that not only allows you to play chess but also teaches you how to improve your game.

Dead Ahead (Android and iOS) is a combination of an endless runner and a racing game, you need to outrun the zombie hordes on your motorbike while dodging obstacles. It gets fun when you realize the zombies will follow you to your doom over various traps and jumps.