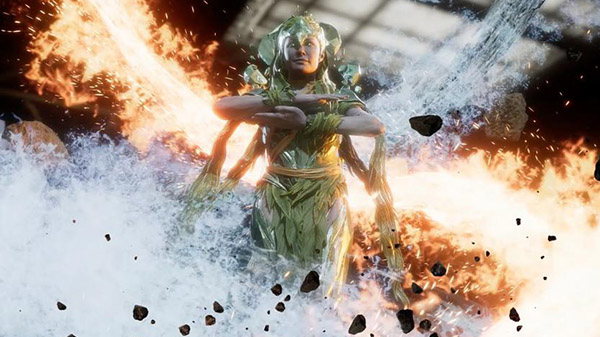 A completely new character has been revealed for the upcoming Mortal Kombat 11 game.

In her reveal trailer, she is shown levitating rocks from the ground and is seen controlling plants similar to the Batman villain, Poison Ivy. She is also shown to be capable of controlling fire, water, ice, and wind, the main Earth elementals.

For her fatality, Cetrion traps her opponent with rocks. She then grows in size and stomps on them. However, that isn’t the end of it; she continues to grow until her figure hovers over the planet. She then unleashes an energy beam from her mouth, shattering her opponent.

The trailer and Game Informer don’t offer many clues of what Cetrion is. But the official Mortal Kombat Twitter account revealed in a tweet that she is an Elder Goddess. Elder Gods are the highest rank deities within the Mortal Kombat franchise. They usually take a passive role within the narrative of the games, with the exception being Shinnok, who is a fallen Elder God. Raiden was also an Elder God briefly until he returned to Earthrealm as its protector.

This would be the first time a current Elder God will have a major role in the story mode of a Mortal Kombat game.

You can find Cetrion’s reveal trailer on Game Informer’s website. The site plans to have a whole month of exclusive Mortal Kombat content.