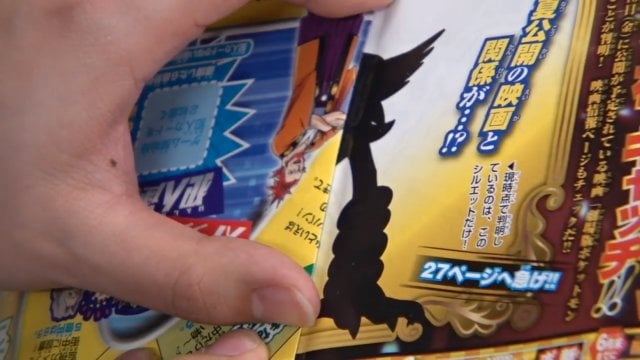 The brief sneak peek from CoroCoro magazine evolved into a full-body silhouette of the upcoming Mythical Pokémon.

The full details will be revealed in the new movie on Pokémon Day, Feb. 27, but Nintendo knows how to build the hype. The partial silhouette drew fan attention and speculation, and today, a new, full-body silhouette has appeared.

The first images appeared Feb. 12 during CoroCoro’s livestream on the topic. The partial image featured just a brief look at the upcoming Mythical, possibly showing what could have been the arm, chest, and head of the new Pokémon.

With the full-body silhouette revealed, it is clear that the new Pokémon’s design is based on a monkey. The hands, tail, and posture suggest monkeys, and it closely resembles the body type of other monkey Pokémon, such as Monferno.

Speculation about the new Pokémon is already circulating. The silhouette already bears some resemblance to the feral child shown in the Japanese promo trailer. The hairstyle and arm design are almost exact, suggesting some connection.

The new Mythical Pokémon will be fully revealed in the new movie on Feb. 27. Following the reveal, the Pokémon will be available in Pokémon Sword and Shield through an as-yet-detailed event.