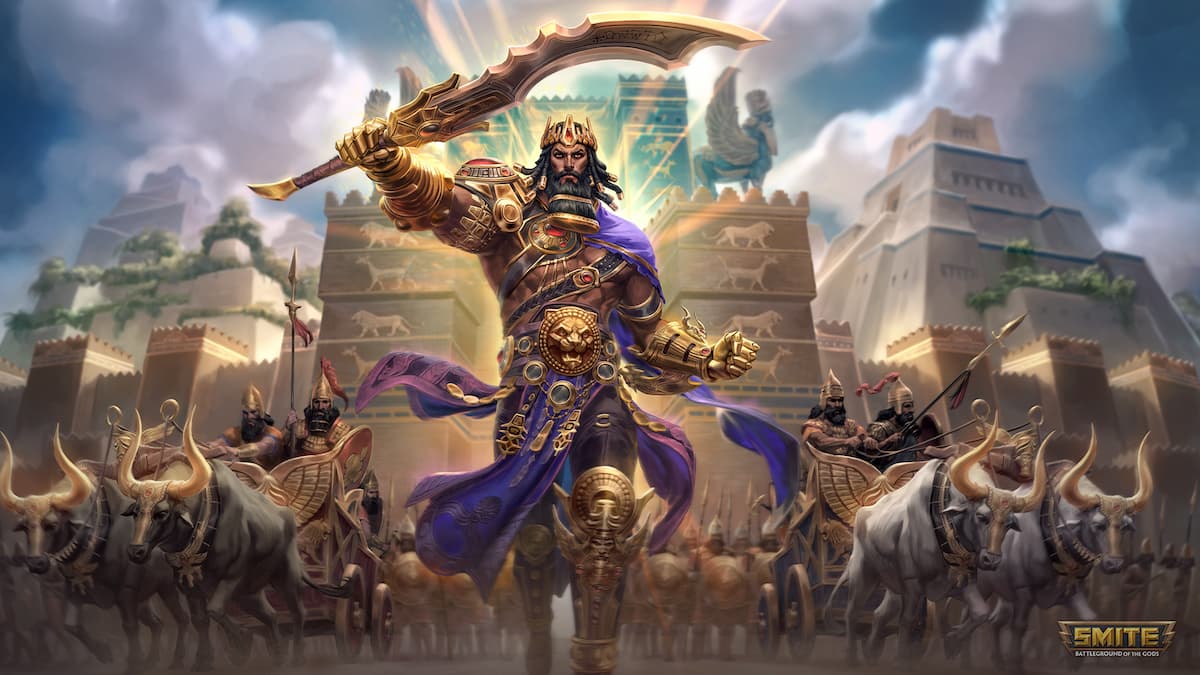 Gilgamesh, a mighty warrior bent on defeating Tiamat, has arrived to Smite. He will be a warrior, and comes with several new passives and abilities that will shake up the current Season 8 meta. He’ll be going live in update 8.4, which is set to hit the live game on April 20.

There are several new god changes coming to the start of 8.4 Oddly, Sylvanus is receiving a buff, giving them far more strength, so we’ll see how the shakes up the meta given player’s love to place Manikin Scepter on him, giving him and his hunter free reign to destroy a lane. Manikin Scepter did not receive a buff or a nerf for this update.

There are numerous new god skins too, being added to the big event for Gilgamesh’s arrival. There are also some small map adjustments arriving as Tiamat extends her territory over Smite, attempting to remain at the top. But Gilgamesh has something to say about that on his search for immortality.

Here is the full patch notes for update 8.4

Bumba’s Hammer, Death’s Toll, and its upgrade Death’s Embrace allow for strong benefits from ‘hitting’ enemies. This hit however could be easily procced from range on immune Jungle Monsters. For items with true Lifesteal or healing you need to engage with the Jungle Monsters if you plan on gaining a benefit. This will now be the same for these items.

This item no longer procs on “immune” jungle camps

This item no longer procs on “immune” jungle camps

Ornate Arrow struggled to compete against other late game Hunter choices. It was often only efficient at its maximum stack count which was difficult to obtain and pushed your late game out even later. We are lowering the stack count and giving it some extra upfront power to smooth out this power curve. You will still need to make a smart investment but the risk will feel worth the reward.

Leader’s Cowl was difficult to really build toward. Few gods could really go for Leather Cowl at the start of the game to provide their team with a strong late game aura. We are adjusting its base stats and giving the passive aura a baseline Power buff that can never be brought below 5% Power. The extra Attack Speed helps more gods itemize towards this strategy and that base Power Aura makes it useful even in direct 5v5 teamfights.

Sentinel’s Embrace is the go to upgrade path for Supports and no wonder! It brings incredible survivability and utility making it difficult to explore other options. We are shifting strength away from the Aura, ensuring it still feels tanky enough to the Support who builds it but lowering the teamwide utility it provides.

Compassion is definitely a candidate for an item being pushed out by Sentinel’s Embrace but it had its own problems. The aura range made it difficult to stay relevant to targets you wanted to protect while the mitigation this item provided from this extra incoming damage was lacking. With the changes below it might be time to show a little Compassion to your allies.

Sundering Axe’s Passive is high impact. Opening fights with a strong amount of burst and restoring health quickly made this item not only attractive to Warriors but Mages as well. We love the idea that gods can be flexible with starters but Mages were able to really benefit from the upfront burst and defensive stats in a way that was more frustrating than a Warrior utilizing the same benefits. We are shifting Sundering Axe to consider your own Protections, making this just as strong for Warriors who currently build this but asking more from Mages who want to benefit from this items strength.

One of the most popular aggressive starters isn’t quite packing the punch that people expect it to. Bluestone users need to have an early game advantage to make the item worth taking, even with its upgrades it tends to fall of harder in the mid game than other starters. We are boosting the physical power here to give it the strength it needs to get ahead early.

Bluestone upgrades have had a lot of discussion recently. Brooch is intended to be the standard go-to upgrade for classic bluestone users like ability-hunters and aggressive-warriors. This item just wasn’t up to the same level as other starter upgrades, so now the passive will deal significantly more damage.

This item is scary. It scared the devs a bit more than the players, though. We launched it with an especially long cooldown to match the especially powerful effect, but it seems it was tuned to be a bit too safe for balance. We are cutting this cooldown by a large amount to hopefully see the item in practice before making any further decisions on how to balance it.

He’s bold, he’s beautiful, he’s… not doing so hot right now. Achilles has dropped to some of his lowest numbers in both player perception as well as win% lately. This god can become very dominant in the solo lane with small changes, so we are playing it a bit safe here. He is seeing a small cooldown buff to his Shield Bash, which should help him without breaking him. We are also decreasing the amount he is punished for successfully executing an enemy. This effect is a powerful debuff that he should still feel, though.

Season 8 is a heck of a party but no one invited the god of wine?! Bacchus has shown some brief signs of strength in Conquest over the years, but he generally struggles there compared to other modes. This set of changes aims to make his competitive impact stronger. Chug will be even easier to maintain, and Belch, his primary lane clear ability, is seeing a damage increase.

BELCH OF THE GODS

The World Serpent is a fantastically unique god in SMITE, and after a powerful launch he was brought down by his rival gods in both the story and the game balance. We have been looking to bring Jorm back up since the start of Season 8, and we are still working toward that goal. These changes bolster his laning phase as well as his team fights. Consuming Bellow will let him basic attack in lane at full speed for longer after bellowing and Submerge will be on a lower cooldown helping him to engage or escape more often.

The time has come for Merlin buffs. This god has dropped off heavily over the years while getting a variety of nerfs. Recently we have been focusing on bringing up his fire stance, often regarded as the weakest one. The protection shred has been pivoted to only work on gods now, but its generally very hard to stack, which heavily limits its impact. This is going to be much stronger on the first tick now, leveling out to about the same amount when hitting all ticks in the late game. Fire stance should now be more attractive to switch into, especially when trying to focus down and enemy tank.

The Weaver of Fate saw some impactful buffs last year, and we have been watching closely since then. Even with those changes, Neith has struggled in the current meta. Her abilities are powerful, but tend to be on much longer cooldowns than other hunters. To even the playing field we are decreasing the cooldown on her top priority ability.

New season, new map, new olympus, but Olorun feels like he was left behind in Season 7. Recently Sol and Chronos received buffs which made a solid impact on their stats, and now it’s Olorun’s turn. He will be getting two buffs that affect his basic attack damage, helping him match up better against other ADCs.

The premier single target Assassin has been struggling to get kills lately. Serqet was seeing more play as a support, which was addressed through some previous changes. The final result seems to be that she’s being played less in both positions, we are applying two buffs to her both to push her back toward an aggressive jungler. The first change protects her passive from being wasted against effects like the Aegis Relic or block stacks, and the second adds a good bit of Physical Power scaling to her Ultimate. Serqet is a very all-in goddess, and those risky plays should pay off more frequently with these changes.

This Guardian is certainly undervalued right now. Sylvanus brings a lot of control and Utility to the team, while also having some of the best lane clear because of his unique basic attacks. His passive is often a topic of discussion, and that is something we are working toward on a future update. For now, he is getting a few small damage buffs to help him lane more effectively. This should compliment his CC and healing well, resulting in a support that any ADC would be happy to have by their side.

The Mother of Monsters has created quite an interesting start to the season. This goddess clearly has a learning curve, as we have seen her win% steadily grow since launch day. The kit is complex and provides many decisions to the player, a few of which are now showing themselves to be clearly the strongest option. Building Tiamat as a tank has created some frustrating interactions with her passive mitigations, so these will now require Magical Power to scale. Also, her serpents are showing themselves to be the best choice for her Ultimate. We are nerfing their split push potential in both damage and health, while also buffing the Storm to make this a more meaningful decision.

Season 8 dev testing made it feel like Zhong Kui was back! His favorite old item, Vampiric Shroud, and some other meta changes made it look like he would be a major factor. That has not been the case. We are giving Zhong Kui a significant power scaling buff to his primary ranged damage and lane clear ability. This should give him a fighting chance against other mages in the meta.