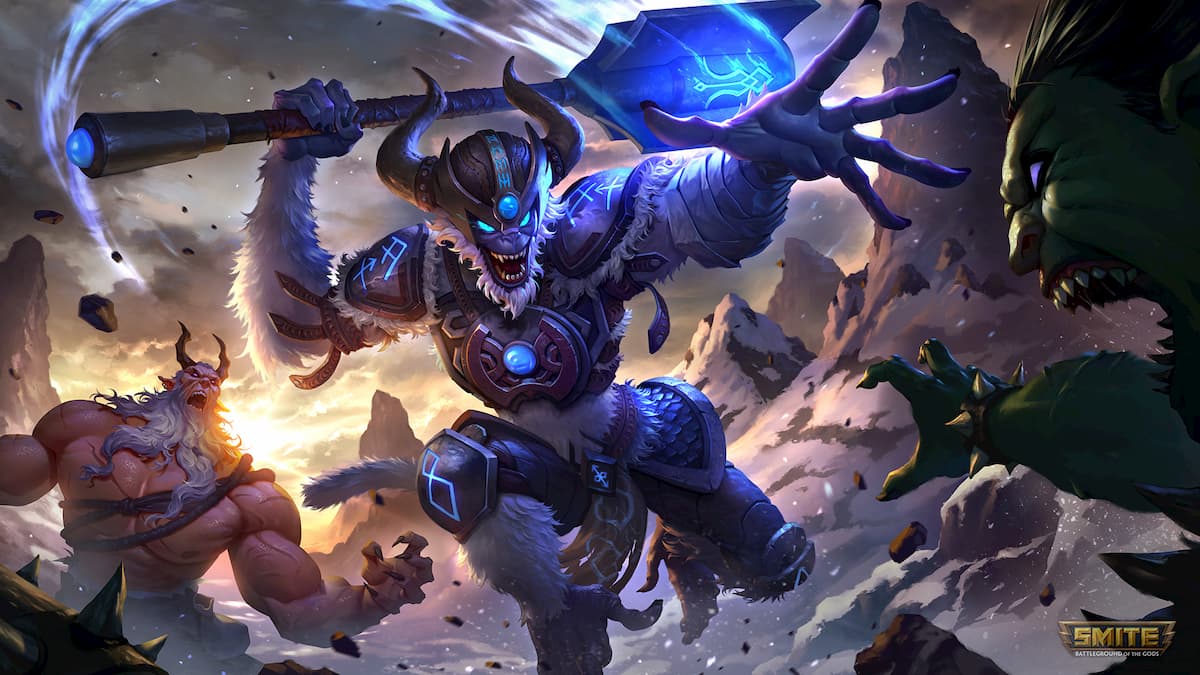 The second game of the Smite Worldchampionship Season 7 quarterfinals pits Spacestation Gaming (SSG) against the Pittsburgh Knights (PK). This match-up winner will face off against Radiance in the semifinals, the deciding game before the final competition.

You can watch the event on Smite’s Twitch page or YouTube. We’ll be providing updates throughout the match.

SSG features Nika as the solo laner, Cherryo in the jungle, Dardez as the mid laner, Vote as the team’s hunter, and iRaffer in the support role. These five will be facing off against the PK as they bring in ScardD as the solo laner, QvoFred as the jungler, Paul as the mid laner, Zapman as the hunter, and NeilMah as the team’s support. It will be a best of five competition.

The first round sees SSG securing Cú Chulainn for Nika, Kali for Cherryo, Discorda for Dardez, Sobek for iRaffer, and Cupid for Vote. On the other side, PK were able to grab Cthulhu for ScaryD, Pele for QvoFred, Aphrodite for Paul, Ymir for NeilMah, and Heimdallr for Zapman.

It’s a quick, aggressive game as SSG dive into PK and dominate them during the battle. PK only manage to secure 2 kills against SSG, whereas the heavy team composition of SSG allows them to gain 15 before it draws a quick end at 29:12 minutes. Thanks to the heavy support of Chulainn, the rapid fire power of Cupid and the frontline Sobek, the first round goes to SSG.

With SSG coming into the second round with a solid starting victory, PK will need to rethink their strategy. They start out the next round with some extremely risky picks, but are the rewards worth it? PK goes into round two with ScaryD on Cú Chulainn, QvoFred on Hun Batz, Paul on Hel, NeilMah on Sobek, and Zapman on the surprise pick of Artemis. They’re facing off with SSG’s Nika on Guan Yu, Cherryo on Cabrakan, Dardez on The Morrigan, iRaffer on Khepri, and Vote on Cupid.

Without a doubt, the Artemis pick by PK crippled them from advancing. SSG utilized their Morrigan option, with Dardez perfectly using the ultimate to become Hun Batz whenever they needed to disperse the team and engage in a teammate. SSG’s overall aggression proved to be too much, dominating the Smite World Championship Quarterfinals’ second game.

With their backs against the wall, PK has to start pulling out a victory, or they’re going to be swept out of the Smite 2021 Worldchampionship. PK goes into the third round with ScaryD on Guan Yu, QvoFred on Camazotz, Paul on Scylla, NeilMah on Sobek, and Zapman returns, surprisingly, on Artemis. They’re facing off against SSG’s Nika on Cerberus, Cherryo on Susano, Dardez on The Morrigan, iRaffer on Ganesha, and Vote returns as Cupid.

In a turn of events, PK surpasses expectations and fights back against SSG’s onslaught. The third round goes to PK after almost an hour goes by for this round. It featured nearly twenty minutes of both teams attempting to go back and forth, circling the Fire Giant until SSG pushed far too much, and Zapman, on the clutch Artemis pick, is able to secure two critical kills, and then pushes SSG back to base. PK rally to take the Fire Giant, and return to claim the middle phoenix, and the end of the game. One point goes to PK, with two to SSG, as they go into the fourth round.

Going into the fourth fight, SSG may want to consider taking away Scylla from PK. Paul on Scylla proves why she is a little monster, and she able to rip through the backline from a respectable distance when she uses her ultimate. That was the main crux during several key fights, and if it continues into the next engagement, SSG need to think about what assassin they want to use to zone in on her. Alternatively, a beefier warrior is another choice.

During the fourth bout, SSG pick up Sun Wukong, Hun Batz, Discordia, Sobek, and Cupid. PK grab Guan yu Ratatoskr, Scylla, Xing Tian, and Apollo. Despite PK dominating the previous, SSG do not fear the little monster, and go into the battle guns blazing. SSG take things over, but PK overall do give in, taking the fourth battle, bringing the set to a final fight.

In the final match, it’s SSG and PK bringing everything they have to the table to prove who is worthy to make it to semifinals. SSG pick up Persephone, Yemoja, Set, Chullann, and Camazotz. PK choose Erlang Shen, Kali, Aphrodite, nemesis, and Cabrakan.

The game nearly goes over an hour, but PK end with a final run down the middle lane with an enhanced Fire Giant. They topple the remaining SSG players, and burn the titan down to take the final game, despite struggling for the first two.

PK brought it everything they had, despite struggling the first two matches. It only took them a little bit to find their footing, but once they had, SSG couldn’t stop them. PK will be advancing tomorrow to face off against Radiance in the semifinals.