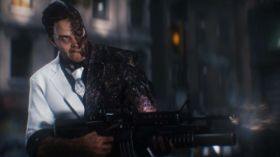 For the last few months, Rocksteady Studios has hinted at their current project following wrapping up work on 2015’s Batman: Arkham Knight. Some pondered that they may be doing something with Superman, though it indicated otherwise. However, fan’s guesses may not have been far off.

James Sigfield, a journalist for Geeks Worldwide, recently posted a series of tweets talking about work having gone on two Superman games that never saw the light of day. That thread is available at this link.

Warner Brothers reportedly had several pitches revolving around Superman starting in 2013. One was for an open-world game similar in structure to Insomniac Games’ Marvel’s Spider-Man. In it, Superman flies across the city to save the day. Alas, despite the game’s inventive ideas, it never found its way past the prototype phase and was eventually canceled.

But then, for the other pitch, Warner Bros. went with a project called Superman: Unbound, based on the animated film of the same name that released that year. It would’ve taken place in a fictional city by the name of Kandor, though it would’ve been more of a focused environment and not open-world. It would have had villains like Doomsday and Brainiac in it, which you can see their concept images below.

WB has been actively trying to develop an open world Superman game since ~2013. A thread… pic.twitter.com/UMYHDGamiL

Superman: Unbound had solid ideas, but Warner Brothers set up a requirement for DC Comics to use the Batman: Arkham engine from Rocksteady to some extent. As a result, the developers couldn’t get Superman’s flying to work. Reportedly, a Suicide Squad game was also set to make the rounds but got the same treatment.

DC Comics are not gone, though. For the past few months, WB Montreal, the developers behind Batman: Arkham Origins, have been teasing a new project revolving around the Court of Owls. With the Video Game Awards 2019 happening next month, there’s a good chance we could see the project officially unveiled, currently named the Batman: Arkham Legacy. It’s doubtful we’re going to learn what Rocksteady is working on, though.

Warner Brothers and Rocksteady have confirmed none of these details, so take them with a grain of salt.