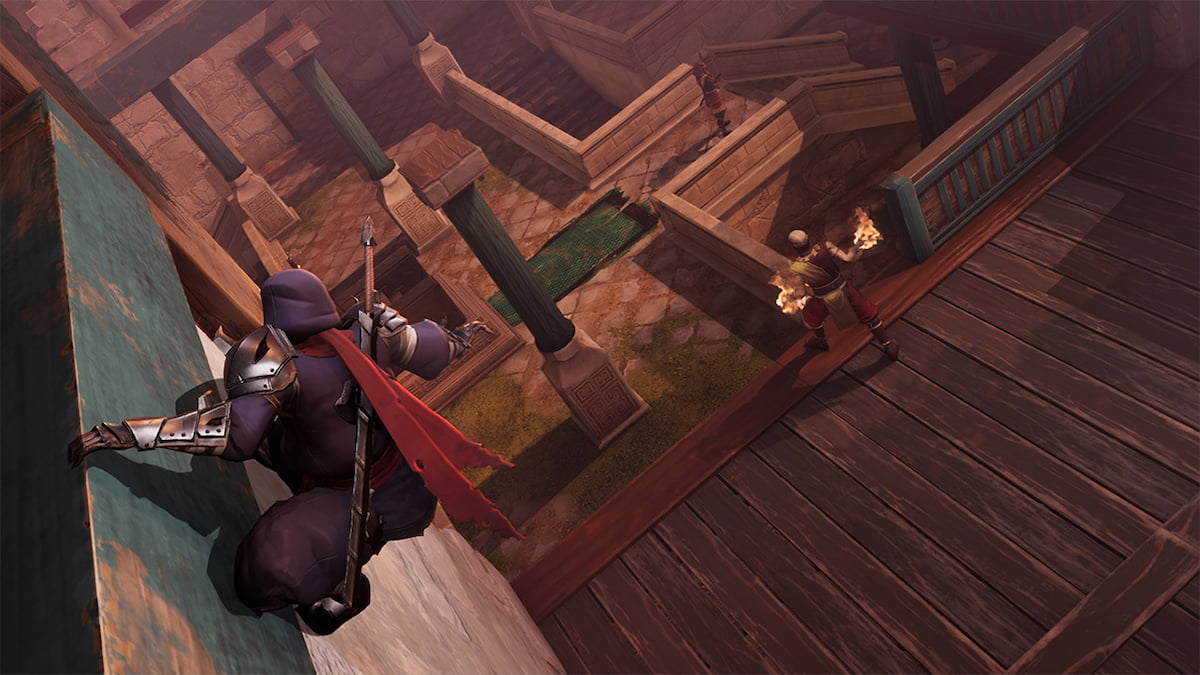 The stealth mechanics and fun of silently taking out enemies in Aragami 2 cannot be overstated. I’ll sit in wait, watching an enemy from a hidden vantage point, carefully balancing the burning candle of my patience, striking at the best opportunity to alert no one else, and give myself plenty of time to hide the body. There’s a triumph in successfully sneaking away and completing my mission objective. Still, this repetitive process is done so much in Aragami 2, it loses its luster quickly, and you’re left wanting more variety.

Aragami 2 takes place in a feudal fantasy setting in Rashomon Valley, where your clan, the Kurotsuba, attempts to battle against the warring Aktsuchi, who is trying to wipe you out. You are one of the few elite warriors with Aragami, a supernatural affliction that erodes the body and devours the mind. However, the affliction gives you access to Shadow Essence, which comes with numerous other supernatural powers that you’ll be using throughout your stealth missions. While enticing, not too much plot progression occurs from these early details. However, they give rise to plenty of exciting gameplay modes if stealth is your thing.

Lince Works has constructed a beautiful stealth-action sequence that makes you feel like you’re outwitting the enemies. Most of your runs will have you observing your enemies from afar, watching their movement, and then sliding in at the perfect chance to disrupt the enemy. With a critical working part removed, you can now slip through the machine and complete your objective. You’ll be completing all sorts of tasks. Everything from quietly assassinating a target to acquiring intel for your clan.

When you’re spotted, the combat quickly becomes heated, and things start to fall apart. The sword combat is primarily down to button mashing until your opponent’s stamina bar hits zero or waiting to hit a perfectly-timed parry that you can easily miss, leaving you open to massive damage. Beyond that and a few dodges, you can’t do much else in combat. What’s worse is a majority of your opponents will wield a sword or have access to fire abilities they can shoot at you. The fireball enemies can be difficult to battle because they disrupt the melee combat with most of the swordsmen. Unfortunately, those two enemy types don’t change throughout the campaign, making combat an experience to avoid altogether.

The straightforward combat makes the stealth approach far more appealing, but being spotted and dealing with the enemy is bound to happen in every stealth game. There’s a desire to want something more from this each time it happens, to enrich the combat with an engaging battle even if you make a mistake. Instead, you’re just left feeling glad the entire encampment is not on full alert.

Gradually you’ll unlock shadow powers that give you access to supernatural abilities that augment your stealth angles. For example, you’ll be able to pull enemies toward you and instantly knock them out or distract enemies using a decoy. They’re convenient, opening up previously prohibited areas. But don’t really add much as the overall level design remains the same. You’re repeatedly revisiting only a handful of locations for many of the missions, and these missions feel more like minor chores than legitimate contracts. When you have an elite assassin with access to supernatural powers, it feels like a waste to have this first-class warrior sneak into an enemy camp for supplies.

The repetitive mission structure and flat combat don’t settle well with Aragami 2’s rewarding stealth mechanics. You have the option to approach these games in multiplayer with a friend or two, but not too many things change. Still, Aragami 2’s stealth gameplay is fun, and if you can put up with repeating locales, there are moments of fun to be had. Just stay in the shadows and avoid the frustrating direct combat.