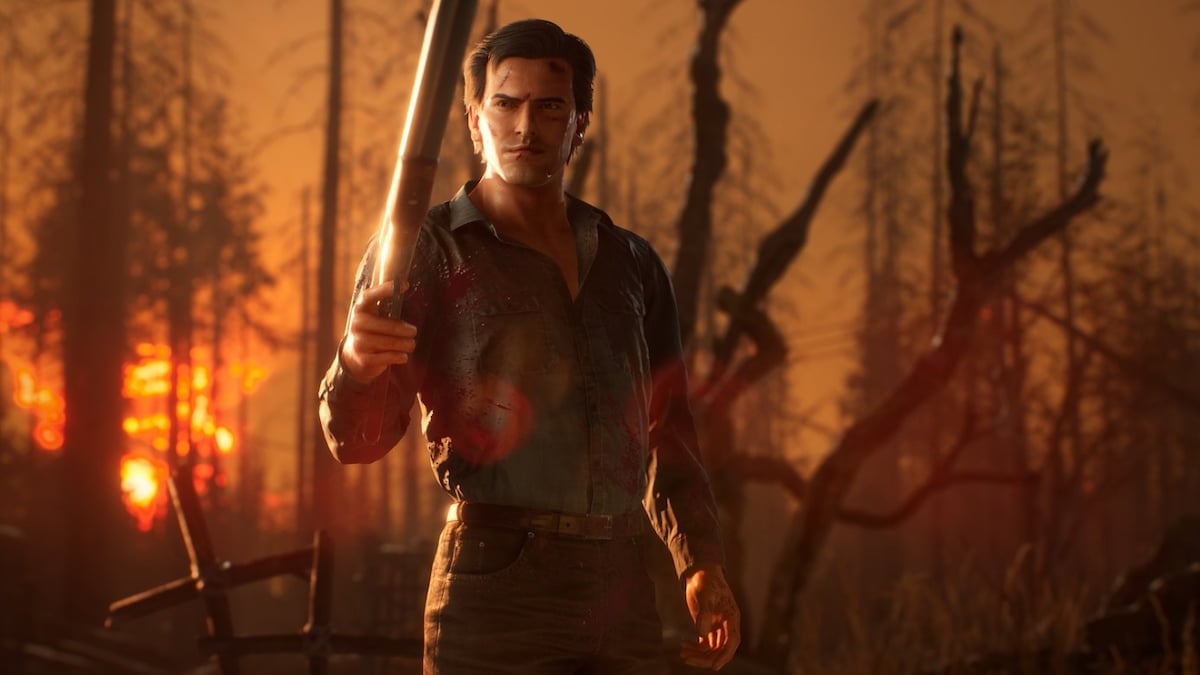 I apologize in advance for the number of Evil Dead movie quotes placed in this article. Evil Dead is a favorite film series of mine — Evil Dead 2 is my go-to Halloween flick — so I came into Evil Dead: The Game more than ready to give some Deadites a taste of my boomstick. There’s plenty to love about the game, but there’s also more than a few visual and audio problems that make it tougher to love.

First off, the references in Evil Dead: The Game to all the Evil Dead movies is astounding. Not only do you have several flavors of Ash (in fact there are a grand total of four Ash choices, ranging from his first appearance in The Evil Dead all the way to his most recent appearance in Ash vs. Evil Dead) but you also have a staggering amount of side characters to pick from. A few that stick out are Annie Knowby from Evil Dead 2, King Arthur from Army of Darkness, and my personal favorite Ed Getley, also from Evil Dead 2.

On the demonic side, you can choose between Henrietta from Evil Dead 2, Eligos from Ash vs Evil Dead, or Evil Ash from Army of Darkness. Your choice affects your minion spawns — Deadites, Demons or Skeleton Warriors, each with their own strategies and weaknesses. The Skeleton Warriors will occasionally spawn a flute-playing Skeleton as well — and it’s actually a problem for the Survivors. Hell, I think I heard something saying “klaatu verata nikto” while I was near the Knowby Cabin. The dedication to the series is incredible.

Alright you primitive screwheads, listen up!

Here’s the rub with Evil Dead: The Game — there’s a lot to take in during a match, even if you’re familiar with the source material. Even playing the tutorial (twice, once as a Survivor and once as a Demon) did not really help me much in a real game. The “pick up item/interact” button seemed really unresponsive at times, which had me wasting time often trying to pick up a single object — which would lead to giving the Demon player more time to spawn traps around me. The map in the game is massive when compared to Dead by Daylight, and so if your teammates run off without you, it can be a chore to get caught back up.

The visual clarity in the game is lacking, as well. Pop-up messages tend to cover a huge chunk of the screen real-estate, and the mini-map lacks a lot of clarity when you’re trying to differentiate between the three other Ash characters on your team. The ping system also fails to ping things that are arguably important — bonfire/light sources, for example.

The sound design is partly brilliant, as weapons and sound effects are fantastic. Random demonic chittering, the konk sound when you smack a Deadite with a shovel, or the unmistakable revving of a chainsaw all sound incredible. However, there are also random UI sounds, such as receiving a new mission or finding a hidden item that doesn’t immediately stand out amongst the other noises, especially if you’re in the middle of an attack. Often, these UI noises would lead me to think that an enemy has spawned nearby, when it hadn’t.

I’ve got a bone to pick with you!

There are also some problems with the length of the game. Survivors first have to find three pieces of a map, followed by finding the Lost Pages of the Necronomicon as well as a Kandarian Dagger before they can fight off the Kandarian Demons and defend the Necronomicon as it detonates. That is seven objectives to fight over, which leads games to be quite long indeed.

This becomes a problem when you can’t find a Map Piece, or one of your objectives is literally on the other side of the map and the Demon has plenty of time to gather energy and spawn enemies and traps well in advance. On the other hand, if you spawn too close to the objects, the Demon often won’t have enough time to get enough resources in play to make it feel “fair”. The map is simply too big for this game in my opinion, and spawns are too varied in distance.

When everything spawns appropriately, however, the game feels balanced for the most part. Survivors have ample opportunities to revive and support one another, and the Demon has plenty of ways to push and pull Survivors both on the way to and at objectives. It’s the right kind of chaos when you’ve got four Survivors circling the Kandarian Demon, zapping it with electricity while Skeleton Warriors spawn in — and then the Demon possesses someone with too high a Fear meter.

I’m the biggest Evil Dead dork I know, and so this game was a lot of fun to play — I kept taking breaks between writing this to play “one more match”, which is definitely a good sign. However, I can already tell that the systems of the game as they are currently won’t lend this game towards any sort of longevity, unlike Dead by Daylight. The map is too large, the grab item button fights you half the time, the visual and audio clarity is often confusing, and to be frank, I can’t help but feel I’d have an equally fun time re-watching the movies instead. This is a great game to play with friends online or on Discord, but it lacks a lot of polish, which makes me want to put it down sooner rather than later.