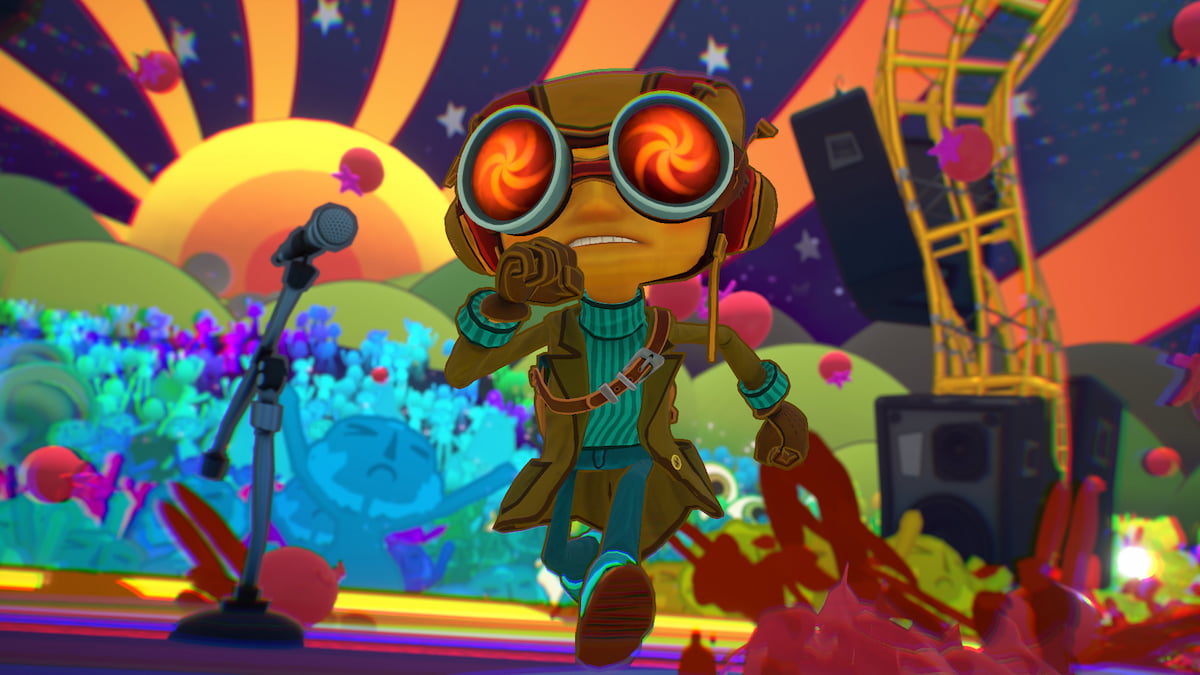 It’s been 16 years since the original Psychonauts was released, and Razputin’s platform adventuring returns in a strong showing in Psychonauts 2. Things are exactly where we left them since the original game, and other than the graphical update, it doesn’t feel like developer Double Fine Productions misses a beat in returning to the wacky Psychonauts universe.

The story is filled with small nods and callbacks to the original Psychonauts, but those who never played it won’t be missing out too much. Psychonauts 2 is quick to reference the first game but is much more interested in moving forward with a beautiful story full of characters that grow as they manage their inner demons.

What Psychonauts 2 does best is handling the internal issues that plague many characters by discussing these problems in a mature manner, while throwing in a witty joke here and there to lighten the mood. Psychonauts 2 handles all of these matters wonderfully and is a pure joy to play.

A blast to the past

With Psychonauts 2 taking place right after the first game, everything feels like it clicks right back into place. For those who missed the first game, the starting level does a great job of focusing on the current narrative and giving you the critical information that you need to play and enjoy the entire story.

The concept of the Psychonauts 2 is pretty simple: You assume the role of aspiring Psychonaut psychic Razputin and jump into people’s minds, battling negative figments and trying to learn what’s going on inside their head. The game rarely detracts from this simple formula, but they add critical ingredients with emotional conflict, private fears, and even tricky topics like panic attacks; while these topics are approached from a video game perspective of being enemies that you beat up and defeat, but they’re maturely handled in a way that the core audience who originally grew up with Psychonauts can relate to.

What Psychonauts 2 does take from the previous game is the core gameplay, level design, and collectibles hunt. It’s been a very long time since I’ve been able to pick up a game and immerse myself in it. It’s a flashback to how games were initially played on a PlayStation 2 or an Xbox where the main story held the dominant spotlight, with the collectibles and unique challenges being a secondary focus.

Each new level contains a brand new adventure, having you use Razputin’s psychic powers differently. You’ll gain a new power every so often, but you’ll most likely stick with the ones you receive at the start of the game, many of which Raz learned in the first game. It was refreshing not to have to learn these all over again in a sequel. Much like the source material Psychonauts 2 was handling, Razputin has grown since his first adventure.

The big standout flaw for Psychonauts 2 was the flow of combat. You’ll be battling a person’s figments while inside their head, and some figments can only be effectively damaged using certain psychic powers. After you initially use those powers, you’re bashing them with a basic attack combo. It’s a straightforward experience, but it can feel floaty when you’re fighting three to four enemies at once and inconsistent with the otherwise smooth movement you’ll have while exploring.

Psychonauts 2 doesn’t play around with the struggles of the characters. Instead, you’ll explore the mind of someone dealing with alcoholism, the mind of someone who doesn’t remember who they are and experiences panic attacks, and of another who splits up their personality to better suit their situation. These problems are reflected in the creatively designed levels, with each environment reflecting the person’s mind Razputin is psychically entering.

I don’t use the term “sublime” lightly when describing exploring many of these levels. There was also joy in completing the main Psychonauts 2 plot and returning to previous levels to finish up a handful of collectibles I missed during the main story. Returning to previous levels was optional, but it felt refreshing to see them all over again — it allowed me to catch the small details the designers left for players to notice and how they fit in with the overall personality of the person’s mind.

While the combat of Psychonauts 2 is not the best, that’s not the game’s primary focus. You’ll be spending far more time concerned about the characters and learning about the plot’s exciting angles as you progress through the story.

Many of the characters in Psychonauts 2 struggle with loss, heartbreak, and coming to grips with mistakes they made in their past. It’s hard to imagine that a sequel released 16 years after the original game can handle tough topics in a mature and modern tone, but Psychonauts 2 nailed the landing with superb storytelling, character development, and rewarding gameplay.