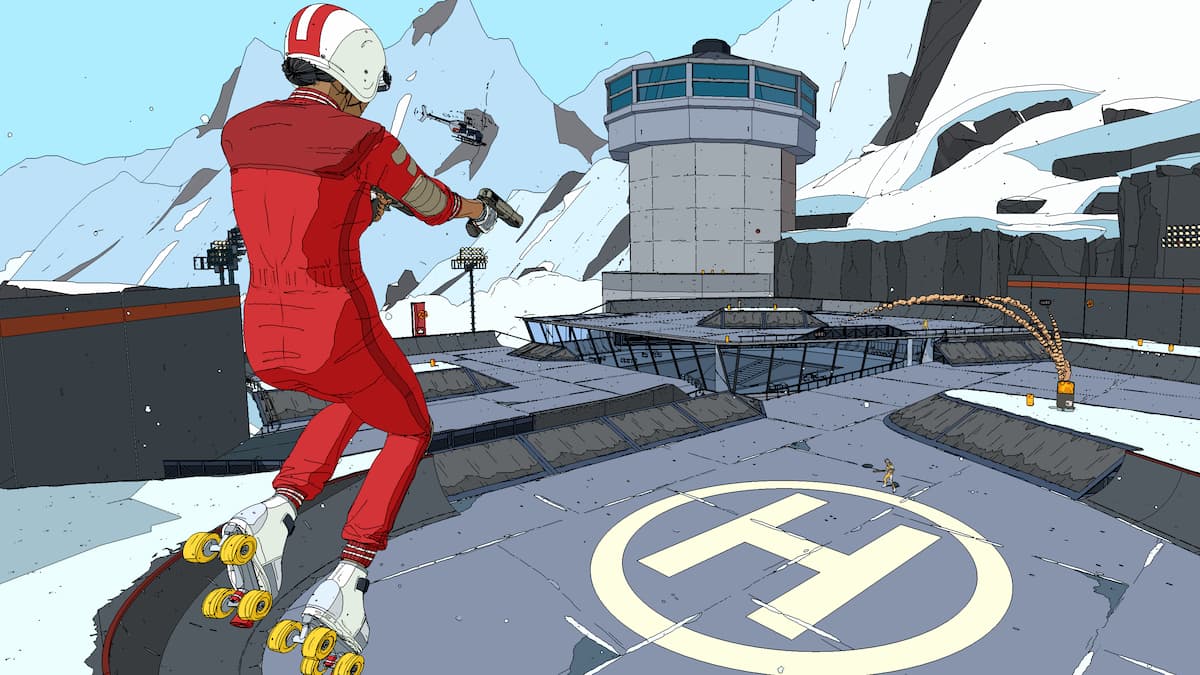 Like many kids growing up in the late 90s and early aughts, Tony Hawk ruled my gaming life for a few years. I didn’t really get into the series until Pro Skater 3 because I didn’t have a PlayStation. Once I got a GameCube, THPS 3 became my go-to game after school because of how easy it was to put it on, turn on some music, and chill out. In fact, certain albums are so connected to Tony Hawk games in my brain that it almost feels weird to not have a controller in my hands when Weird Al’s Running with Scissors or Eminem’s The Eminem Show start on Spotify.

When I come to a new extreme sports game, whether it’s skateboarding, snowboarding, or rollerblading, I’m hunting for that same feeling. Several modern games (notably Session, Skater XL, and Roll7’s OlliOlli World) have nailed this vibe, giving me the relaxing, run-based gameplay I’m looking for. Rollerdrome is decidedly not that, which led to early frustration. Fortunately, the game’s quality was eventually able to win me over, even if it’s not something I’m interested in returning to in the future.

The vibes are off

To be clear, this is very much a “me” problem. I’m the kind of dude who just wants to drop in and let my stress melt away when I’m playing a skateboarding game. It’s more about nailing a rad line than it is racking up big scores — though those do go hand-in-hand at times. That’s why I preferred skating games when they were still simple. THPS 3 is probably the sweet spot, and many of the games afterward added more than I personally needed.

Rollerdrome doesn’t just add more buttons; it also adds several different enemy types for you to learn. Like any good extreme sports game, you can do grabs and grinds while adding in rotations and flips to keep things interesting. These tricks are relatively basic if you’ve been keeping up with skating games, but they are still fun to pull off. Plus, you can’t actually fail to land a trick, so it’s a bit more mindless than something like Session. That’s important because doing these moves are the only way you can get bullets back into your guns. And you’re going to need those.

Every level is full of enemies that you have to kill to complete. These enemies range from basic bat-wielding thugs to teleporting hunters that use their minds to shoot beams of energy at you. It gets wild. Thankfully, you do have some key tools at your disposal. The most prominent are the four different guns you wield. Between your dual pistols, shotgun, grenade launcher, and experimental laser, you have plenty of options.

You can also hold the left trigger to enter slowdown (a very important tactic when using that shotgun if you want to maximize damage), and you have a dedicated dodge button that lets you avoid most attacks. Still, as they layer on more enemies later in the game, things quickly get hectic, and not in a good way. I was often reminded of my high school days working the register at McDonald’s during the evening rush, juggling angry customers and a nagging boss while trying to just do my job. Sadly, there wasn’t a free Quarter Pounder awaiting me when my shift killing bad guys was over.

On top of all this, each level has 10 objectives for you to complete in addition to murdering your enemies. Tony Hawk fans will be familiar with these objectives, but the addition of opponents trying to constantly kill you makes some of these a chore. For example, each level has a special Trick Token that you need to complete a trick near to finish the objective. I quickly lost count of the number of times that I had the Token lined up and ready to attack, only to be knocked off course because I had to dodge a laser beam at the last second. Doing all of this while trying to stay below a par time (or risk taking a hit to my score) kicked up my anxiety to its max.

Early on, this was frustrating. I knew going in that Rollerdrome would be different than Tony Hawk, Skate, or Session. Heck, it’s even a far cry from developer Roll7’s skateboarding series OlliOlli. It has guns, after all. I just wasn’t expecting the experience to be so stressful. A lot of that comes down to the specific way I want to play games like this. It’s more about relaxing with a game that boasts tight controls and not much else. Rollerdrome’s introduction of guns and enemies moves it closer to an almost competitive experience where I’m no longer in control of how intense the session is. Sure, you can take several runs at each level and break things up, but it often felt like I was fighting the mechanics rather than just flowing with them. That’s the antithesis of a good skateboarding or rollerblading game to me.

About halfway through the game, that feeling started to subside. Part of it was likely just me getting used to Rollerdrome’s gimmick, but I can pinpoint a very specific point that really made me turn the corner and go from simply respecting the craft without really liking it to thinking Roll7 is onto something.

Rollerdrome’s plot centers around a future dystopia where players join the Rollerdrome to compete for a better life. It’s run by an obviously corrupt super corporation, which you’ll slowly learn more about as you play. This background story is intriguing, though it’s mostly told through background details and radio broadcasts. However, the important bit is that the corp is building new weapons they can use to put down anyone who goes against them and is testing them against the Rollerdrome competitors.

About halfway through, you’ll come up against one of these experimental weapons. It’s a massive tank with rockets, a Gatling gun, and legs that turn into ramps. Most importantly for me, there are not many side objectives to complete. It’s just you, your rollerblades, and the tank. After so much stress-filled gameplay, it was like entering an oasis. The pressure to complete objectives melted away, and I could just focus on staying alive and doing some good, old-fashioned murder.

Unfortunately, this boss battle is the first of just two, and the follow-up is just a slightly harder version of this one. Had Rollerdrome focused more on these boss fights, I think I’d be much more interested. In fact, so much of the game’s story, look, and vibe invokes The Running Man, an 80s movie starring Arnold Schwarzenegger as a resistance fighter put into a death game by a totalitarian regime.

That film is filled to the brim with personality via the enemies that Arnie fights, and Rollerdrome could’ve done something similar to make its story more interesting and give the battles even more style. Sadly, there’s no opera singing, 300-pound fighters in the fray. Each enemy type is distinct from the other, but there’s no variety. Once you’ve seen the first, you’ve seen them all. Of course, it’s hard to fault a developer for taking a different direction, but this game is begging for more personality. It has an incredible look, but so much of it feels dry because there’s nothing really backing that up.

In spite of my problems with how the game wastes some of its potential, it must be said that the developers have done a great job at making something that can appeal to just about anyone. Not only can you replay the campaign with much more difficult levels, but there are countless accessibility options to tune the experience to your liking. This includes things like turning off damage, giving you infinite ammo, or just making every level playable without having to complete challenges. It’s a host of features that are well thought out and important because you have total control over how difficult Rollerdrome is.

Rollerdrome is the kind of game that needs a sequel that takes the concept even further to reach its full potential. Roll7 has proven to support its titles with sequels, which makes me very excited for what a second Rollerdrome game might be. Just look at the OlliOlli series: over three games, it’s expanded on its core premise until releasing the excellent OlliOlli World earlier this year. Rollerdrome definitely has the bones to do something similar.

My time with Rollerdrome was filled with ups and downs. The core idea is great, but it took a while for me to warm up to an extreme sports game that puts pressure on you to juggle multiple things at once. Visually, it looks phenomenal, but Rollerdrome lacks the personality that would’ve taken it over the top. It’s a solid first outing that needs a follow-up to reach its full potential.