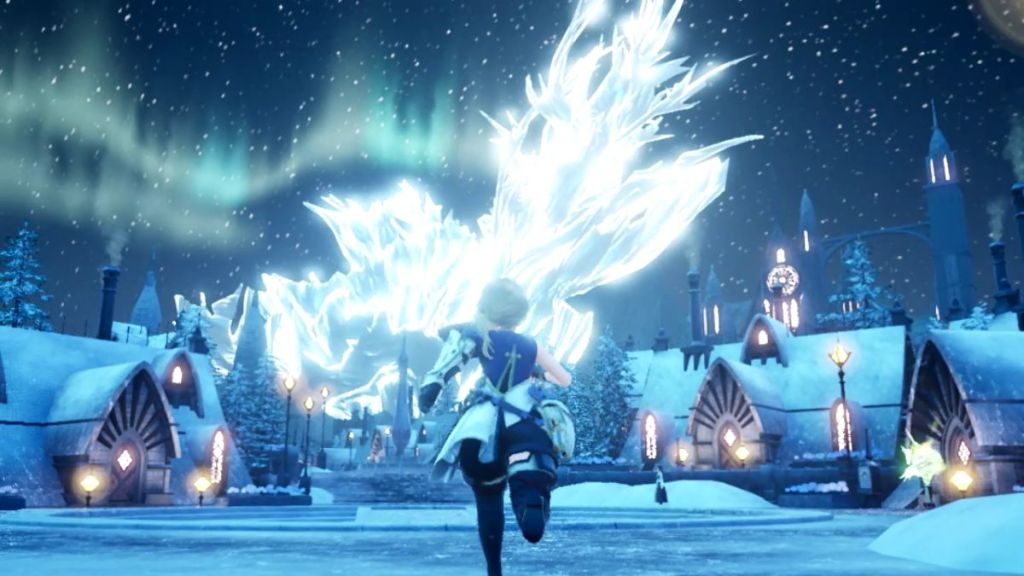 I still remember what it was like cracking open my first Square Enix RPG on the PlayStation when I was a kid. Back then, everything was blocky, magic was almost always overpowered, and Cloud Strife’s hair defied all gravity. Harvestella brings back that nostalgic feeling, but not in the way that you would hope. More than an RPG, Harvestella also has a bunch of life-sim mechanics rolled in and a very convoluted story of time travel where the fate of the world hinges on your character and their companions.

When trying to gauge whether Harvestella is a game worth playing, I think of it as one that belongs right in the middle of Animal Crossing and Final Fantasy XIV.  The game has many elements to keep you interested, from farming, fishing, and fights to the death against monsters. Despite this, you may find yourself questioning where to go and what you should be doing, much like in an MMO when you don’t pay attention.

When you boot up the game, you are met with a character creator that gives you the most basic options to choose from before sending you on your way. The options you get to choose from are your gender (with the addition of a non-binary option), two character models, hair color, eye color, and skin color. It would be nice to see a few different faces or hairstyles so that every character doesn’t look like a copy of the last.

Your first day in this new land is filled with excitement — after waking up with no memories, a woman named Cres gives you the rundown of what is going on. It doesn’t take long for things to go sideways and for the Seaslight crystals to start acting abnormally. This, and a woman appearing from a different time period, instigates your goal of figuring out what is wrong with the seasons and learning the truth behind the season of death, Quietus. You will quickly learn that the game doesn’t have voice acting which, while slightly disappointing, doesn’t take away from the enjoyment of the story, as long as you don’t mind a lot of reading. But those who tend to ignore the reading will surely get lost and be confused about what they should be doing at times.

While most of the story that I experienced was worthwhile and definitely kept my attention, Aria (the aforementioned woman from the future) felt more like a nuisance at first. She spends most of the early moments in the game waking your character from a peaceful night’s sleep or making brief mentions about the future, while later telling you that she can’t tell you about the future. Despite this, the story does have its charms with many recurring characters. Even the side quests can stir up some emotion, such as the series of quests for the children of Lethe, who are upset that their friend is moving away, and how they try everything to get her to stay. Lost connections are always worth shedding a tear for.

The exciting life of a farmer and hero

There are two sides to the gameplay of Harvestella: the monster-slaying and adventuring, and the day-to-day farming, fishing, and crafting. On the RPG side of things, you can explore dungeons that are filled with monsters and participate in pretty basic hack-n-slash combat that doesn’t stand out from anything you would find in a fantasy game from the Nintendo DS era. Similar to other Square Enix-developed RPGs, there is a job system that lets you change your fighting style and learn new skills. This, however, feels recycled from one of the many other games that use a similar feature. The dungeons are full of mysteries, from items, hidden pathways, and frightening monsters too powerful to take on, making a return trip essential if you want to experience everything.

Outside of combat, you can enjoy the simple things in life that range from completing tasks for villagers to increase their companionship, to sowing the fields of your farm and selling crops to get some extra cash. While tending to your farm is a way to pass the time, there is something that feels off about it. Similar to combat, farming feels like a copy and paste of mechanics from different games that operate like you are playing on an early-generation system. Many of the actions you perform on your farm feel clunky, and your character has a very robotic movement they perform during them.

No matter what you are doing, you are sure to fall in love with the environments that you are doing it in. Similar to other fantasy games from the developers, there are tons of glorious sceneries in Harvestella that change depending on the season and time of day. At night, the fauna glows a myriad of colors. This, combined with the soft music of the original soundtrack, will help you forget the negatives and drift away into relaxation. During combat, the exact opposite is true, as the music and scenery will amp you up and have you ready to fight.

Pulling out the weeds

To be frank, there are many who won’t like Harvestella due to the contrast of an ARPG mixed with a life-sim. Those who are fans of old-school RPGs will find comfort in the game mechanics since they are all very familiar to other games you will find in Square’s catalog. The main and side quests are solid and have a lot of content to keep you occupied, but some of the characters have dialogue that could be changed or omitted altogether. Overall, Harvestella is a decent game and definitely deserves some attention, but it won’t outclass the heavyweights in the same genre. Don’t go into Harvestella looking for a farming sim. In doing so, you will be disappointed. Harvestella is, at its core, an ARPG with farming sim elements.