It’s been two years since the release of PGA Tour 2K21, and a lot has changed in both the real and virtual worlds of golf. A major competitor to the PGA has arisen, the PGA Tour is set for a major overhaul, and 2K’s golf franchise will have some company, come 2023. That being said, one would expect that PGA Tour 2K23 will come with just as much change, including in MyCareer and MyPlayer.

2K21 was a first step forward for HB Studios and 2K, and the two entities are poised to make inroads come October 2022. Thanks to some time with the early version of PGA Tour 2K23 and a conversation with the PGA Tour developers, we have a better understanding of what MyCareer will look like.

A much more customizable experience

PGA Tour 2K franchise manager Sean West told us that for PGA Tour 2K23, MyPlayer models have been rebuilt from the ground up. As a result, new improvements to animations and swaying reactions have been added, as have presentation elements like new cutscenes and more tools to allow for better customization. PGA Tour 2K23 will offer several new and returning sports and fashion-themed brands, including Adidas, Air Jordan, Hugo Boss, and TravisMathew.

The way players can customize the performance and ratings of the created avatar is also getting an overhaul. In PGA Tour 2K21, golf clubs were essentially the only major element that could influence the attributes of a player. That will change for PGA Tour 2K23, thanks to three significant additions to the creation of a MyPlayer: archetypes, fittings, and ball sleeves

Events are also customizable in MyCareer. For many of the events in PGA Tour 2K23 MyCareer, players will have the option to swap out a course in lieu of another one. Caddies will also be present for MyCareer, although, for 2K23, these figures will not have an attribute boost attached. However, Sean West told reporters earlier this month that he does see a bright future for caddies in the franchise.

Archetypes will set the baseline for a MyPlayer’s core attributes, such as power, timing, shaping, and put speed, just to name a few. These archetypes will be split into five categories: Powerhouse, Rhythm, Woodsman, Greensman, and Sculptor. From there, players can increase the attributes of their equipment from the base defaults via Skill Points. Skill Points can be used toward an attribute tree that applies to a user’s clubs, like a driver or putter. Each club skill will be situational and can either be activated or deactivated based on player performance.

Two other elements, fittings and ball sleeves, will also come into play. Fittings are essentially add-ons to a player’s avatar. Players can insert these fittings onto clubs, and boost attributes.

Ball sleeves are a temporary boost to a player’s stats. There are four kinds of ball sleeves: Flight, Spin, Bounce, and Roll. Ball sleeve boosts will apply to different balls, should one choose to swap during the time the sleeve is active. Fittings and Ball Sleeves can be obtained via MyCareer, or from spending VC.

Several elements from PGA Tour 2K21 will be kept for 2K23. Players can start their PGA journey either directly at the highest level, or from the Q-School or Korn Ferry Tour. The PGA Tour will feature three new official events, and several new fictional events. 2K23 will also mark the addition of LPGA athletes into the title. LPGA golfers are grouped into the main PGA Tour for 2K23.

The new elements were present in our time with a beta build of PGA Tour 2K23, which we had a chance to play earlier this month. It was evident after our time that MyCareer looks to be making a decisive step forward.

Our early impressions of MyCareer

The implementation of archetypes and fittings, just on the surface, makes a big difference between 2K21 and 2K23. Limited abilities to modify how a MyPlayer actually golfs on the course in 2K21 did bring down the mode a bit, just on the premise that everything felt the same all the time. With the inclusion of archetypes, players now have the chance to create a power-heavy beast that can drive with brute force or a shifty golfer with a knack for shaping the perfect shot.

Fittings and ball sleeves also add a new and much-needed element to the game. Adding alternative ways to power up golfers on the course should, in theory, encourage experimentation upon the launch of 2K23. Far too often in sports games, players love to build “meta” builds, and what comes afterward are copycats and very little room for the non-meta players. While there will most likely be meta builds in PGA Tour 2K23, the fact that archetypes are not the only influence should increase the diversity of builds. Although, we won’t know for sure until the full game is released.

Lastly, MyCareer’s new fresh coat of paint will look similar in many respects. Sponsorships are back for 2K23, as is the presence of rivals. The rival system is a bit different, though, for 2K23. Rather than going through a path of rivals, players can go through tiers. Each tier features a new set of rivals.

PGA Tour 2K21 was primarily a solid first offering for the franchise, but 2K23 is a significant inflection point. With EA Sports making its own PGA Tour golf game, 2K23 has to be done the right way. While MyCareer in 2K21 worked just fine, character and tour customization were limited. By installing new build options and making this affordable for players, 2K23 can be a chip shot, so long as things fall right in October. 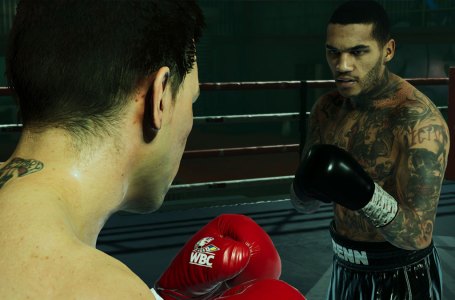 How to throw uppercuts in Undisputed