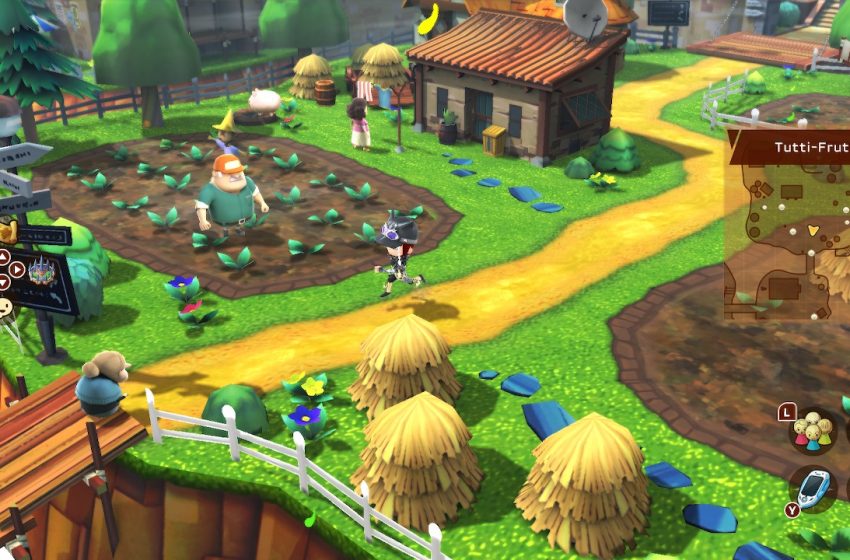 Snack World: The Dungeon Crawl – Gold is an action-RPG from developers Level 5. Initially launched in Japan in 2018, the upcoming western Gold version will include all the post-release content from the Japanese version.

You play the part of a humble adventurer who wakes up in a kingdom called Tutti Frutti. You meet the King, a Princess, and a rather unassuming take on Cinderella and then it’s time to start adventuring. Our mumbling Cinderella-like then turns into a gun-toting badass and the game’s humor, often playing around breaking the fourth wall, starts to come into play.

Quests boil down to exploring new areas and fighting assorted monsters. Combat is fun, powered by weapons called Jaras. The idea behind Jaras is that they shrink weapons down to manageable size, and you can then make them big again in battles, allowing you to carry plenty of gear that you can instantly switch between. You can have up to six Jaras equipped at any one time, from swords and bows to spears and shields. The game is filled with simple things like this, fun explanations for game mechanics that lots of games just don’t bother with, but do give Snack World: The Dungeon Crawl a healthy dose of charm.

A good example of this is the Pix-e pod, a mobile device that acts in many ways like a smartphone. Normally you wouldn’t get a device like this in this type of game, but Snack World: The Dungeon Crawl just blends fantasy and science-fiction ideas into whatever it needs, and it doesn’t suffer because of this. You can level up your character using your Pix-e pod, and you choose your next quest from a scroll, and the sky doesn’t fall down.

Mission areas are randomly generated and filled with creatures to bash who will then drop all kinds of loot. From new weapons to resources to build armor, cosmetics, or anything else you might need, everything you would expect from an action-RPG is here. You can bring allies with you to missions in the form of Party Snacks who will accompany you, and Pocket Snacks that you can deploy for a short period of time during quests. This adds further variety to what you can do during quests, which is never a bad thing. Exploring areas fully will normally result in some boss battles, which are fun and frantic and do require some skilled play to get passed.

Combat is fun, but I found the jump action to feel a little unresponsive, almost needing you to be able to predict when you will need to dodge something. In handheld mode, I also found the screen getting just a little bit busy, and losing some readability, during very intense fights, but this wasn’t an issue at all when played in docked mode.

While I haven’t had time to draw full conclusions about the game, those will be coming in our review. I am certainly enjoying my time with Snack World: The Dungeon Crawl. I get the feeling the humor won’t be to everyone’s taste, but I also appreciate all the steps Level-5 has taken to ensure a user-friendly experience. Cutscenes can be skipped, and long strings of dialogue have a fast forward option. While a lot of people will never use them, it is still nice that the developers respect player’s time like this. Even little things like the double loadout feature, where you can have gear equipped that effects your stats, and other gear equipped that effects how you look. Simple things like a quick access menu that will teleport you to Tutti Frutti’s various shops and places of interest indicate a well thought out experience.

If you are on the lookout for a fun, cute action-RPG to take on the go with you, this could very well be the one.

Snack World: The Dungeon Crawl – Gold will release on Nintendo Switch on Feb. 14.