Roller skates are old school. If you spot someone out in the world with a pair on, either they are very young, or too old to care what you may think of their escapades. It’s not to say they aren’t fun, but they are old fashioned. But Ubisoft didn’t get the memo. And good on them too, because if they had, we might not have got this fun, if a little shallow competitive roller sports game.

The premise sounds a lot like the game that many think it’s trying to imitate, Rocket League. In a team of three, you and your teammates have to take control of the ball and evade your opponents to score a goal by throwing it into the activated hoop. Where Roller Champions take is unique in that you must complete a full lap counter-clockwise from the starting line to activate the scoring zone. Completing additional laps will increase the number of points per goal scored, so completing a single lap and scoring offers 1 point, two laps is 3 points, and three laps are the max at 5 points. The ultimate aim is to score 5 points overall or to have the most points after seven minutes to win. It’s a fairly simple premise for victory.

What’s not so simple is getting around the track without taking a bump from the three opposition team members. You can use a Dodge action, jump and glide to improve your survivability or increase your speed. Once you’ve got around once though, it’s then up to the ball carrier to decide if the points on offer are enough or whether taking another lap is worth the risk. You can also throw the ball to a teammate or further up the track.

As the defending team, you have to catch up to the ball carrier, knock them off their feet and then carry the ball back to the starting zone to begin your full lap. Slipstreaming will help with speed, and you can go around the ring in the opposite direction to take them head-on.

The game, on the whole, is fairly simple, but getting into position to maximize speed, and effective dodging is where the skill comes in. It’s very satisfying as the ball carrier to spot the three opposition team members coming at you with speed, only for you Dodge all of them at once, putting all of them out of position as you speed straight through. It rewards players who are not only patient but who work together to provide space for you to make a run or push the ball past an incoming opponent.

The fast-paced nature also evokes the same feel as Rocket League too, but patient play both in attack and defence is rewarded, either by building up a lap with the team or by picking the perfect moment to take down a player and pick the ball back up for your team. 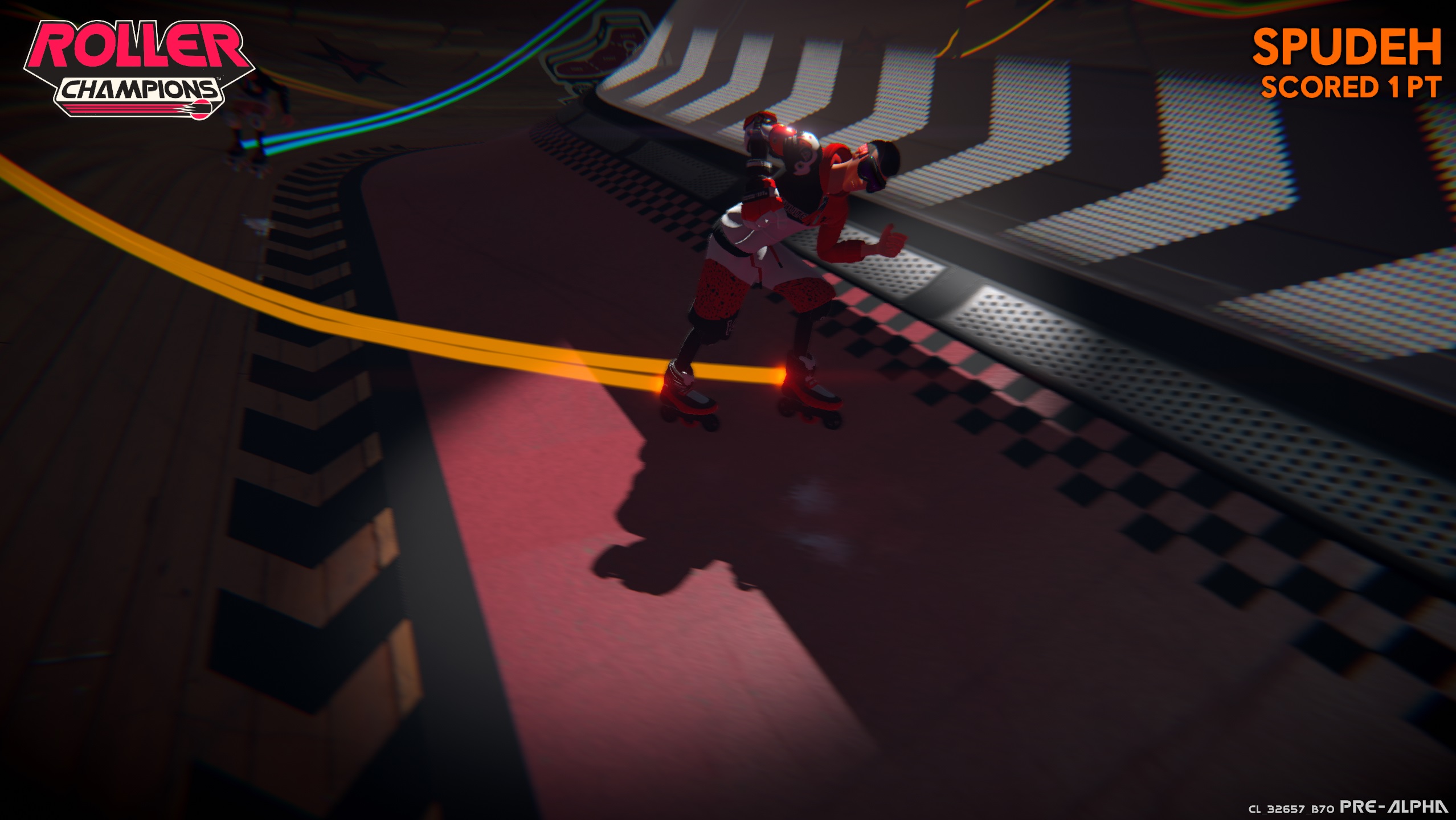 With it being a pre-alpha demo, there were bound to be some issues, and Roller Champions has some mechanics that need work. The dodging action very much favours the attacking team as the dodge animation provides a few frames of invincibility, but that is the case against all players. It seems incredibly harsh for a team to coordinate a defensive move that in almost any other sports game would count in their favour, only for a single dodge to take the entire team out. Taking someone head on is incredibly easy to dodge, so to defend effectively, you must follow the attacker and bide your time for them to make a mistake. It makes defending slightly laborious, and good attackers have a big advantage over a good defence.

There are some technical issues too, such as controls sometimes proving to be unresponsive or glitchy, or the frankly absurd system requirements to play it on PC, but we expect these to be ironed out as the game development progresses.

As it stands, Roller Champions is a game that can deliver a good level of fun, even with the issues above. While the defence is slightly attritional, the overall blend of gameplay mechanics is looking promising. There need to be more ways to intercept the ball (passing doesn’t happen often, but you can intercept a pass) that isn’t merely waiting for the opponent to leave themselves vulnerable, and likewise dodging shouldn’t just be a button press. Incorporating a FIFA style trick system for dodging would increase the skill ceiling. Being a free-to-play game, it’s unlikely they are going to make it much more advanced than in its current form for accessibility, but it would improve the balance of play from an attacking favoured game to a more even playing field if they can incorporate something more advanced.

Whether it has the depth to sustain a player base after release remains to be seen, but it’s a fairly promising start for Ubisoft’s new multiplay IP. We look forward to more time with the game.