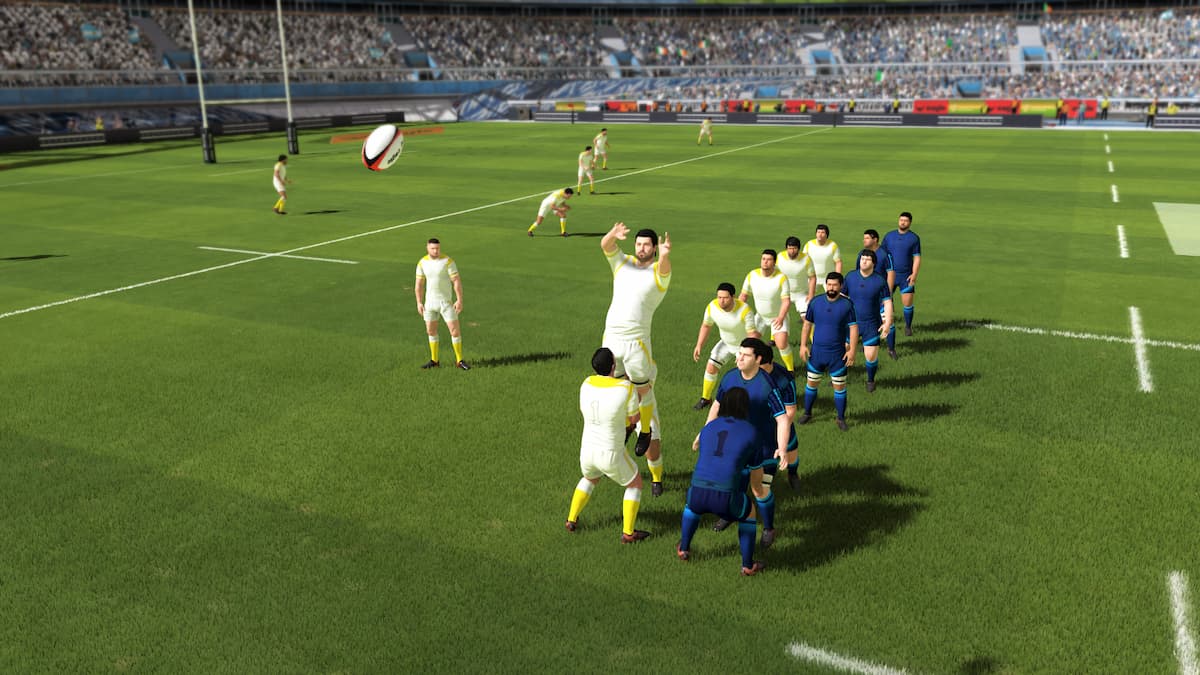 Rugby is far from a quiet sport, thanks to its rough and tumble nature, violent tackles, and incredible pace that can be breathtaking, yet frightening at the same time. Rugby 22 is the successor to Rugby 20, and another instance in which Nacon and the franchise’s development team attempts to master bringing the sport to consoles. After spending time with this title, it’s once again time to wonder as to not only about the future of rugby games, but also sports games as a whole.

The latest offering from Nacon features international teams from around the world, including powerhouses like France, Australia, and New Zealand. Additionally, Rugby 22 includes a number of association rugby teams from around the world, even though some go under generic names due to sponsorship issues. All of these squads can be used across the title’s various modes.However, the actual controls for Rugby 22 are where things get rather interesting. Thanks to the rather complex nature of rugby, Nacon and the developers for the title implemented systems that rely on fast senses and button mashing mechanics that share some striking similarities to past, and future, sports games titles.

In Rugby 22 scrums, players are tasked with playing what equates to a mini-game. Players need to move an icon with the left analog stick into a larger one that constantly moves around, in order to successfully win the push and gain possession of the ball. There’s not much skill to this at all .It relies more on fast sensory action than anything else, as opposed to actual rugby knowledge or skill. As far as rucks go, users need to add more players with either B or Circle to the pack in order to win possession. Again, more emphasis on actual button-mashing, and less on skill.

What might be the two most poignant components of this game are the graphics and game modes. As far as graphics go, Rugby 22’s graphics are okay, but nothing eye-catching in the slightest. That’s somewhat disappointing for those who want a true current-gen experience on the PS5 or Xbox Series X. This is especially true with the player renders, which has sort of been the modus operandi for many other non-AAA sports games that have launched in recent years. Many don’t look realistic, while others look far too similar to each other.

Rugby 22’s game modes also leave a lot to be desired. Career Mode in Rugby 22 is very different from other sports titles. Instead of joining a club and suiting up next to other professional players, users will be tasked with creating their own team. Players must use points acquired from playing rugby matches to craft cards of players in order to add the right athletes to the team.

This feature feels quite tedious, for a few reasons. For one, it makes this mode less friendly to those who want to just jump into Career mode and play in a relaxed and casual setting. Instead, it requires users to play in other modes, just to get the points needed in order to build the right team. Also, Career mode also has an emphasis on making profits, which seems great if you’re into becoming a rugby executive, but even more of a hassle if you just want to hop into a match.

As I noted earlier, Rugby 22 is emblematic of what is going on in the sports video game industry today. One, graphical advancements in Rugby and other franchises have seemingly stalled, and that’s not really hard to understand in today’s gaming landscape. After all, this takes not just time, but also significant manpower in order to make it a reality. Since most major and even non-AAA sports franchises have annual releases, it’s hard to make major changes to the models and even the gameplay animations in this, or any, sports series.

Second, it’s becoming more and more evident that franchises are neglecting casual gamers en masse. I’m not suggesting that a franchise’s dedicated base of gamers should not receive the bulk of the attention. In fact, from a practical and a business perspective, that makes quite a bit of sense.

However, sports game franchises need to be able to attract casual gamers as well, as those players can eventually be integrated into regulars. In order to do that, game developers and publishers need to make things more user friendly, in order to encourage players to get in on the action. Rugby 22’s career mode is a good example of this.

Career mode can be a great way to introduce players to rugby, but not giving users an option to join an already established roster of players makes playing the title more of a hassle than anything else. Add this to modes like EA’s Ultimate Team and NBA 2K’s MyTeam, and it’s not hard to figure out that sports games as a whole have a bit of a problem: game developers and publishers focus the vast majority of resources in one pot, and much less on other parts. If that pot doesn’t suit the needs of casual players, those individuals will be more and more likely to not come back.

This, to me, is the issue with Rugby 22. It’s not a terrible game, by any means. The gameplay does somewhat well with meshing between button-mashing and skill thanks to set plays, even though it does lean quite a bit towards the former. Still, it’s fair to really wonder how much of an innovation this title is from the past. I don’t believe that to be the case. The setup for this game just doesn’t seem to be all that advantageous for casual players, who seem to get squeezed and squeezed in sports titles just like this nowadays.