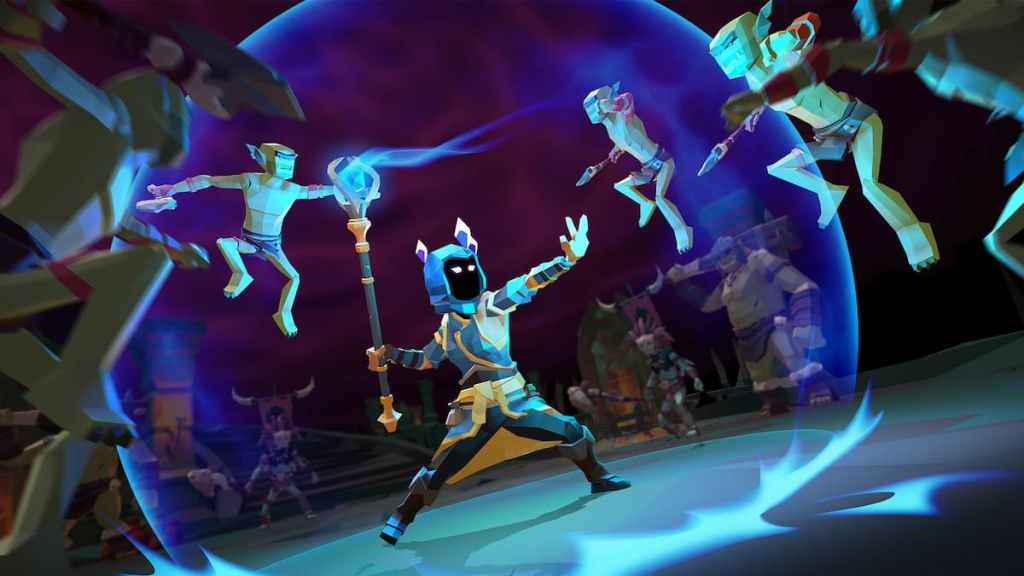 Vampire Survivors took the world by storm when it hit early access — its brand of auto shoot ‘em up was unlike anything else on the market. As expected, several games have looked to cash on the trend with their own version of the addictive gameplay style. Many of these are simple clones without much added, though recent games like Brotato have started to add twists to the formula. For my money though, none of them have done more to push the genre forward than Soulstone Survivors.

Dodging through the crowd

On the surface, Soulstone Survivors is Vampire Survivors with a fresh coat of paint. Gone are the Castlevania-inspired pixel graphics. Instead, Soulstone reminds me of World of Warcraft in its colorful, fantasy setting. You’re using meteor spells and shield bashes in place of whips and holy water. Calling it a pure copy though is a major disservice to what makes Soulstone Survivors so much fun to play.

Mechanically, Soulstone has added several new wrinkles to the Vampire Survivors formula that make it play like a totally different game. The most important addition is a dodge roll button. The easiest comparison for this is a game like Hades, where you can press your left bumper to dodge past enemy attacks. If a horde has you cornered, you can use the dodge to slip through a crack without taking any damage.

On one hand, these dodge roll mechanics make Soulstone Survivors a bit easier than Vampire Survivors. Players looking for that same level of challenge might be disappointed in the early goings because the difficulty doesn’t really start to ramp up until you’ve put a few hours into the game. Conversely, the lower difficulty and focus on fighting boss monsters means that most runs (until you unlock endless mode) are usually in the 12 to 16 minute range. Those quick hit runs make it even easier to find yourself lost in Soulstone’s hypnotically addictive gameplay.

A lack of mystery

What you won’t get lost in — at least for now — are the archaic secrets that made Vampire Survivors such a fun experience when it first launched. Soulstone Survivors may add those over the course of its early access campaign, but at launch, everything appeared pretty straightforward in my 10 or so hours with the game. If you want to unlock a character or weapon, the game is explicit in how to do so. On top of that, the maps are pretty small, leaving little room for secrets to be added. For some players, particularly newcomers to the genre, that’s going to be a positive, but as someone who’s played several of these games, I was a little disappointed that there don’t seem to be any puzzles to solve out of the gate.

There are several other gameplay changes that Vampire Survivors veterans could take or leave. For example, most enemies have abilities that show you the area that will be affected, letting you quickly move out of danger. To go back to the WoW comparison, it feels a lot like a classic raid encounter, especially when the bosses start to pop up. That’s another change where, as you kill enemies, you’ll slowly tick off a counter that causes a boss to spawn when it’s full. You’ll need to take down five of those bosses to win the map, and they become increasingly difficult as you go. The downside is that there aren’t currently a ton of bosses in the game, so expect to see the same ones repeatedly.

Outside of that, it’s mostly what you’d expect from the genre. There are all kinds of persistent upgrades to purchase between games. This includes everything from new spells and characters to improving your base attributes in a skill tree. Soulstone also has a system called “Runes” that wasn’t ready ahead of launch but will provide a way to enhance your character further. If you want to make things more challenging, the developer Game Smithing Limited has implemented another feature seen in Hades, specifically curses. These optional toggles add all kinds of challenges to the map, including extra bosses and hindering your healing abilities. Turning these toggles on lets you earn more and better currency, making them vital if you want to keep progressing.

All of this adds up to a package that I believe will make Vampire Survivors fans happy, and not just those who have already mined every single achievement and unlock out of that game. Mechanically, Soulstone Survivors is more fun to play because the dodge roll gives you that extra bit of control over your character.

I wouldn’t say that Soulstone Survivors in its current state is clearly better than Vampire Survivors, but it has that same ability to hook you in with its gameplay. Additionally, as someone who has 3,000+ hours in World of Warcraft, the fantasy design here is a bit more my style. I do hope that, over the course of early access, the team at Game Smithing Limited is able to add some extra wrinkles to the unlock process, but this is a solid foundation with plenty of room to grow.