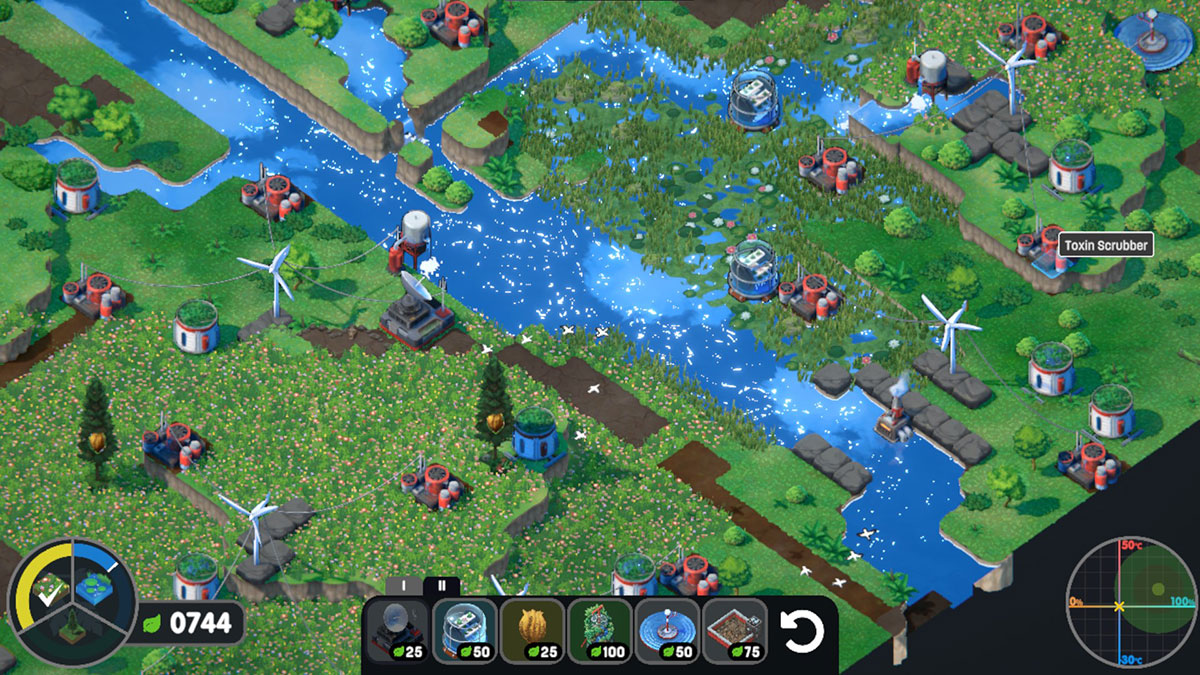 Terra Nil is a strategy game about restoring nature to barren wastelands. Players are plonked down in a blank desert. The only company you have are rocks, piles of bones, and lots of useless dirt. Through the use of cleverly designed eco machines, you’re tasked with bringing that barren wasteland back to life.

While on the surface this appears to be yet another chill experience of creating art more than a game, a deep strategy core lies just beneath the surface, waiting patiently for you to make a single mistake before biting your fingers off with harsh punishments.

We were granted early access to the Steam demo of Terra Nil, and what we found was unexpectedly promising.

From brown to green

The demo contains a single level of Terra Nil. The barren wasteland you play in is procedurally generated, meaning every seed is different and can be shared with others once completed to compare times.

The level starts simply enough. You need to turn everything that’s brown into green. First, you need to place wind turbines, and then you can dump down four soil generators for every turbine. The soil that’s been generated can then be fertilized and transformed into a lush green meadow. Restoring water to the dry riverbeds will create new opportunities to expand your project but terraforming a few squares into more rock for wind turbines or simply be feeding water to the soil directly connected to it.

Each building has a radius, and players must work within these confines to cover the entire map in green. Soil generators must be connected to wind turbines, and fertilizers can only be placed on soil.

Within the first 30 minutes, we had a complex network that stretched across most of the map. We covered almost everything in a lush green carpet. That’s when the game really started.

The second stage of every level tasks players with bringing life to the lush oasis they’ve just restored. Beehives can be placed in trees to create flowering meadows, and fertilizers can be upgraded to generate floodplains where aquatic life can flourish.

Birds and larger beasts on land need forests, and for those, you have to generate some ash. This requires you to use a solar energy generator to create a controlled burn. However, players need to be cautious. We learned the hard way that you can burn up an entire side of the map if you don’t pay attention to where you’re setting fires. The forests you create from the ash help attract more life, but you also need to maintain the same level of nature outside of these life-giving additions.

Maintaining a balance becomes trickier here as your points start to diminish. In the first stage of the level, these only go up. In this second stage, you can lose points by placing something that costs more than what you’ll reap from it. You need to balance the points strategically to ensure you’re always gaining. Otherwise, you’ll end up at a point where you have to restart the stage for lack of funding.

Leave no trace behind

The final stage of the level is to build an airship by recycling all of the buildings you’ve placed in the level. This was when we realized what a grave mistake we’d made with our placements. Recyclers deconstruct buildings, but you can only get those resources to your drone on the river. If you’ve built too many buildings far away from the river, as we did, you’ll need to build multiple recyclers. This costs many points and can land you in a position where it’s impossible to finish a level.

To solve this, players should build new riverbeds in the first stage of the level. Something we had to go back and do after failing a few times in the final stage to make extra sure that we were stuck. Once the airship is built, it’ll fly away and leave behind a lovely patch of natural Earth in its wake.

Terra Nil lulls you into a false sense of security with its adorable visuals and relaxing soundtrack. Behind the curtain is a challenging strategy game that requires you to consider every move before making it. You can undo your last action, but that’s it. Past mistakes are ones you have to live with, which becomes an incredibly harsh punishment when you’re into the third stage. The game has no release date, but for a while, you can play the demo on Steam.