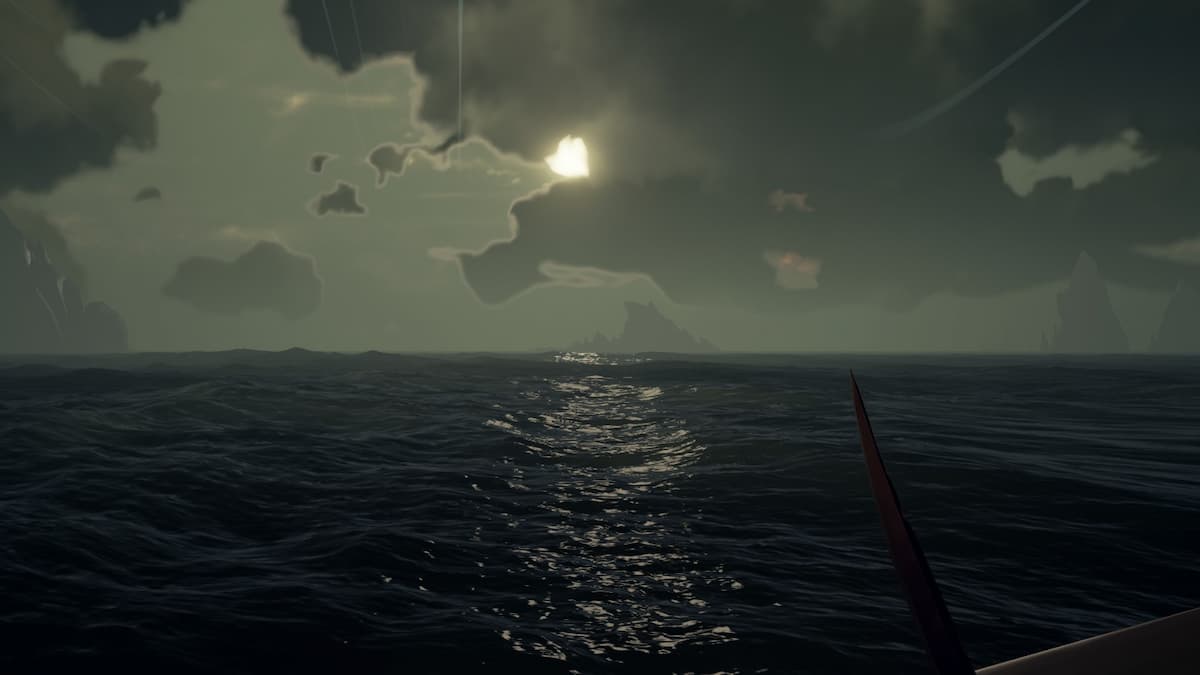 The Sea of Thieves development team at Rare lost one of their team members during the tragic year of 2020, James White. He was an apprentice data analyst for Rare, and had done quite a bit of work behind the scenes assisting the team in balancing the new content before it hit the live servers. To commemorate his impact on Sea of Thieves, the development team came together to memorialise him by placing small journals you can find scattered throughout the game. There are 22 journal locations in Sea of Thieves, and collecting them all rewards players with a commendation.

These are all of the Glitterbeard locations you can find in Sea of Thieves.

A New Flag to Fly

You can find this journal at the broken down camp at the center of Dagger Tooth Outpost. It’ll be lying on the ground, next to a dead fire.

This journal requires you to travel to the Reaper’s Hideout. There, you need to approach the northern dock and look for the journal on the ground. It’ll be in front of a large boulder.

A Tavern of Legends

The A Tavern of Legends journal is at the center of the Paradise Spring island. You can find it right next to the spring, on the rock steps next to several candles.

You will find this journal at Smuggler’s Bay. It be in the center ring of the island, on the upper left side. It’s in the sand next to several barrels, and a lantern.

You must brave the waters of The Reaper’s Outpost to find this journal. It’s on the southern dock as you approach the island, on the ground next to a few barrels.

You need to go to the east side of Thieves’ Haven and locate a shipwreck. The shipwreck will be on the beach, and inside the hull of the broken ship. You’ll know you found the correct shipwreck by the small firepit outside of it. The journal will be leaning against a crate inside the hull.

You can find this journal on the southwest deck of Galleon’s Grave Outpost, on top of a barrel, right before you’d depart on your docked ship.

You can find this one at the northern point of Castaway isle. It will be on the ground next to several empty bottles, and a crate.

You will find this journal at the top of Crook’s Hollow island. Once you reach the top, use your compass to go to the west portion of it, and find a small area with barrels and a cannon. The journal will be sitting on a barrel nearby.

Head in the Clouds

For Head in the Clouds, you need to make your way to Discovery Ridge. On the western part of the island, not the main island by the small sections, there’s a shipwreck. At the center of that shipwreck is a small camp with the journal leaning against a tent pole.

You will need to travel to Sanctuary Outpost. The journal is on the ground next to a flipped over rowboat, closest to the dock on the south part of the island. It’s right next to the island’s tavern.

This journal is at the Golden Sands Outpost. You can find it on top of a rock, right outside of the equipment ship, on the shore closest to the northwest portion of the beach.

The Lost and Found journal is on Crescent Isle. There is a large cave structure at the center of this location, and when you enter it, on the right side, is a small area with plenty of barrels leading further into it. You don’t have to go any further. The journal is on a rock, to the left of the entrance.

You can find this journal by making your way to Shark Bait Cove. You want to proceed to the southwest portion of the island, and be on the lookout for a deserted campsite. The big indicator you’re at the correct location is the painting a rock drawing of a fisherman in a boat, with four fish below them. The book is on the ground, beside the fire pit.

You can find this journal at the center of Booty Isle. It’ll be on top of a barrel, underneath a few palm trees. You’re likely going to encounter a few skeletons when attempting to grab this one.

You can find this Glitterbeard journal at any tavern. It will be to the left of the entrance, underneath a skull hanging up on the wall.

You need to go to the west side of Plunder Valley island. There, you want to be on the search for a waterfall that’s flowing down from an eagle-shaped rock onto a wooden bridge. This journal is a little tricky to find as it behind the waterfall, next to the rocks.

For the Reunion journal, you need to make your way to Stephen’s Spoils. The journal is on a stool, next to an empty crate.

You can find this journal at the northern point of Cutlass Cay. You can find it on top of a barrel right before the island dives into the ocean.

You can find the Soul Searching journal at Plunder Outpost. It’s to the right of the docks, right next to the discarded rowboat sticking out of the sand.

The final journal is located on Plunder Valley, the same island as the Our New Home journal. To access this journal, you will need eight players with you to unlock its entrance. You need to locate a tree with various bottles hanging from it. It is on the northwest part of the island, close to the top.

You and the eight players need to take positions around the tree, standing on top of the dirt patches, and you will need to play a musical instrument. Who plays what instrument does matter, so you need to make sure you are in specific locations using the correct instruments.

Here are all of the dirt path locations, using a compass, next to the tree and the instrument you need you to play the Becalmed shanty.

You have to play these instruments during 10 PM to 11 PM in Sea of Thieves.

Wrecks of the Lost

You can find this book at the top of the arch on Old Faithful Isle. You can find the highest point in the arch by locating the crows flighting overhead. It will be on the northern portion of the island.