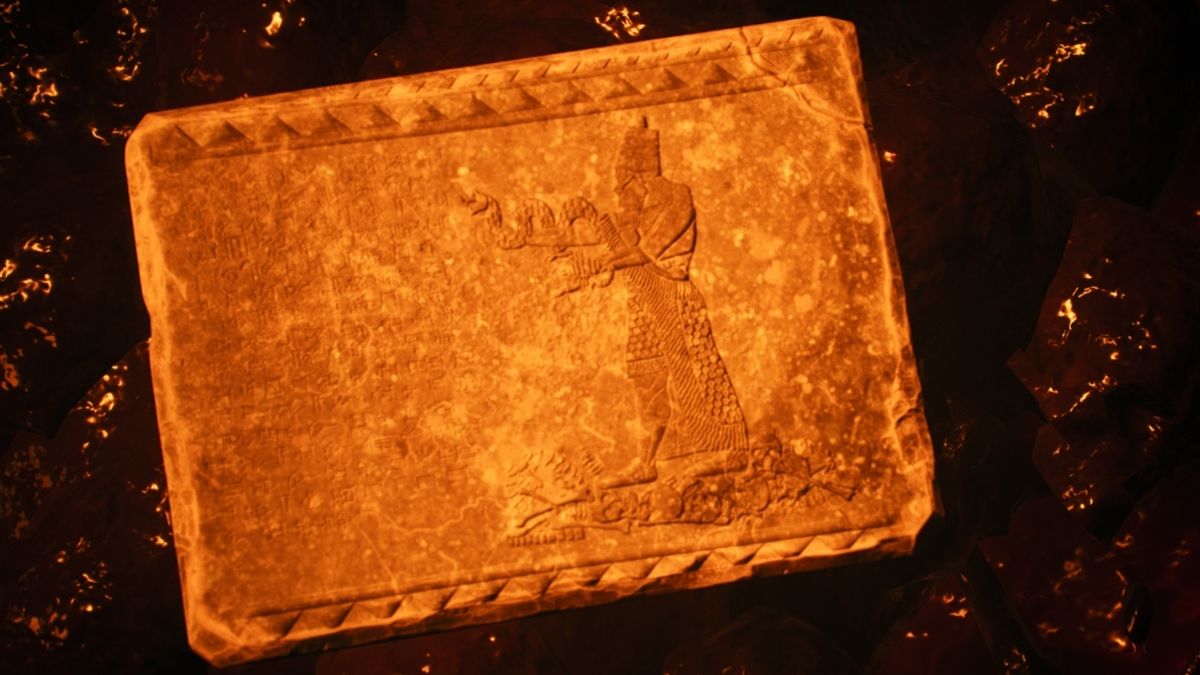 There are a total of 13 premonition pictures (in the form of stone tablets) in The Dark Pictures Anthology: House of Ashes. Each of these special collectibles gives you a glimpse into the future of one of the characters. There are two sets. The light set of pictures shows you ways that characters survive while the dark set of pictures shows you how they will die. Here is where you can find them all.

The first picture pops up in the prologue after you enter the catacombs as Balathu. When you gain control of Balathu and can walk around, check the tablet on the pile of bloody bones to get the premonition.

Progress through the chapter titled, The Raid, until one of the captives spits in Rachel’s face. Afterward, you will take control of Jason. Check the corner of the room to find the next picture called Disarmed.

Progress to the chapter titled The Underworld. You will take control of Nick and have Jason with you. You will be in a room with a giant hand statue in it. Progress forward and walk up the stairs to find the next tablet titled Squeeze.

The next tablet is in the chapter titled Pazuzu. You will have a small cutscene where Salim is trying to locate somebody before taking control of him. Once you have control of him, look in the first doorway on your left. You will find the tablet titled Daylight.

Progress a little farther in the Pazuzu chapter to the point you are controlling Eric. He and Rachel will talk about quality time while walking through a tunnel. Follow the tunnel until it splits and take the path on the right. The tablet titled Fallen will be at the end of the path.

Continue through the story until the chapter titled The Temple. You will take control of Rachel after she and Eric descend into the temple. You don’t need to fix the generator first to collect the tablet. Go up the stairs with the large statue at the top and go through the corridor on the right. Follow it to a room and you will see the Ultraviolet tablet on the wall.

Further into the game, you will play through the chapter titled Breaking Up. After Jason and Nick make it to the temple, they will go through a corridor and step over a tripwire. Make sure to be successful at the QTE or else you won’t be able to get this tablet. After the QTE, you will be able to walk around as Jason. The tablet titled Staked is on a box in the room with a light above it.

In the chapter titled Slayer, you will play a Nick, and Eric will be with you. You will have a cutscene involving a bloodstain on the ground. After the cutscene, look to your right and the tablet titled Surrendered will be next to a journal page.

Onto the chapter titled Bloodbath, where you will play as Jason again. He and Nick will enter the catacombs. You will recognize it from the area where you find the first tablet during the prologue. After entering the room, head to the right. You will see a pile of bones with the Tripwire tablet on them.

The next chapter with a tablet in it is titled The Signal. You will play as Nick and your objective is to get the radio working so you can call for help. As soon as you take control of Nick outside the temple, look to your right and the tablet titled Thirst will be next to the ledge.

Enemy of my Enemy

Later in the game, Jason and Salim will be separated from the group and must work together. After helping one another slip under a stone door, you will take control of Salim. Look to the right and the tablet titled Comrades will be hanging on the wall.

After surviving together for a short while, Jason and Salim will go down deeper into the caves with the use of an old elevator. This starts the chapter titled The Ancient One. As soon as you take control of Jason at the bottom, turn to the right to find the tablet in a dark area.

The final tablet is in the Strange Aeons chapter. This chapter begins once everyone has regrouped and you take control of Rachel in the star chamber. The last tablet titled Hotel will be next to the water.