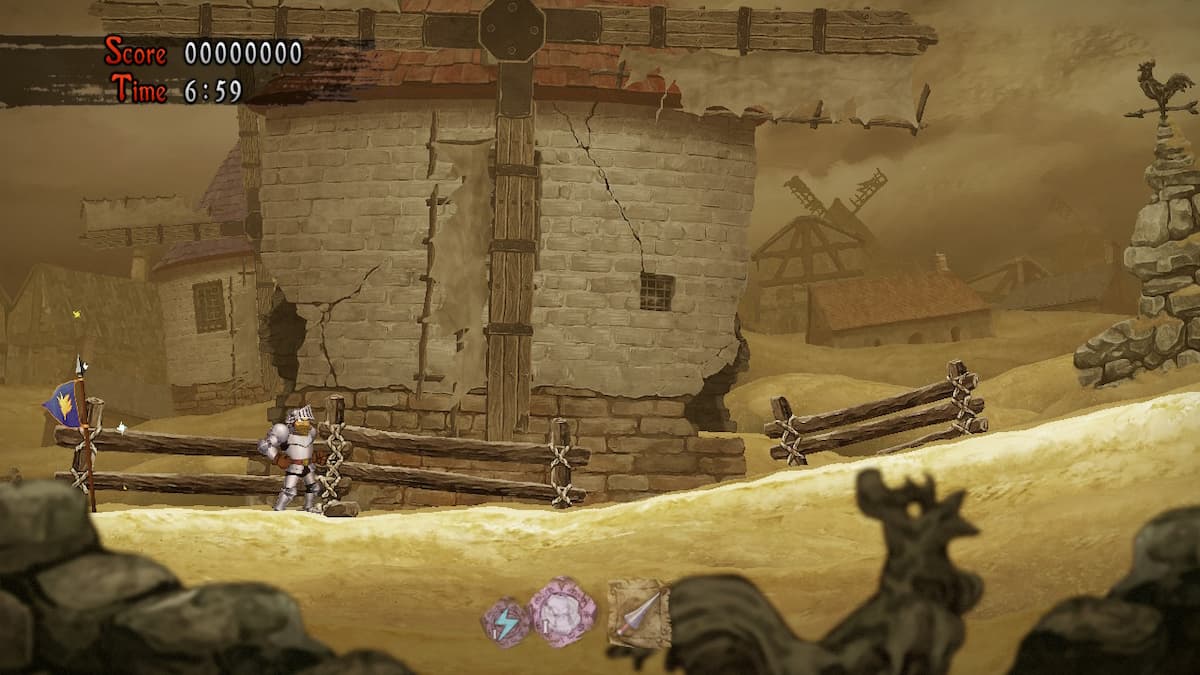 One of the choices for zone 2 in Ghosts ‘n Goblins Resurrected is the Hellfire Hamlet, a stage that sprawls across a desert town, leading you to a lava-filled rampart that contains platforms that move in a clock-like direction. This means that you will need to think and progress fast to avoid taking a lava bath.

This stage contains hidden umbral bees that are not obvious without hitting objects to trigger them. This means that you will need to throw out more attacks than normal to disperse both the bees and the enemies flying at you. You will also need to run for some of them, so be ready to give chase.

Here are the locations of the 10 Umbral bees to be found in Hellfire Hamlet.

As you approach the first spiked windmill, the bee will appear on the right side of it and float between there and the middle of the mill propellers. There is a chest just before this that can contain a genie enemy that can make progress difficult, so only take the chest if you’re confident that you can safely negotiate it.

While on the sloping quicksand ramps, when reaching halfway up the first ramp, a bee will appear at the end on the left side. Simply run up and take it. Be careful though, as falling off here will cause you to go back to the last checkpoint banner and take one life, so the bee will be lost until you restart from the menu.

After the spiked windmill at the top of the sloped ramps, you will face both headwinds that slow you down and enemies that dart at you from behind. This bee is inside an invisible chest that you must break open. There is a large wooden wreckage in the background close to where the rock enemies spawn and start walking slowly towards you. Jump and fire your weapon in this location, and you should hit something solid. Hit it three times to break it open and unlock the bee to collect.

Just past the headwind section, you will see a quicksand bridge with two jumping boulder enemies bouncing towards you. The bee will appear as the sand starts to fade away at the end of the bridge. Focus on avoiding the boulders here to get to the end, and then hang on the edge of the mound and you will be able to reach the bee without putting yourself in danger.

At the ruins where you are attacked by the red demon, move to the very edge of the right side where you see the two floating platforms. As you close in on the edge, the bee will spawn to the right. This bee moves very quickly and doesn’t last long, so you must platform across quickly to get to it before it disappears.

At the end of the section where you encounter waves of fire foxes, you will see a set of steps to climb up. On the second step from the top, you can trigger a bee to appear by attacking the top step. The sound it makes will be different from normal, so you will know you’ve hit the right place. The bee will be above you and you can collect it by jumping up from the top step.

Straight after the sixth bee is the clockwork-like platforming section. There are two bees close to the entrance of this room. For the first one, jump across directly to the right and land on the center square of the second clock mechanism. Once you land, the bee will appear on the platform to the left for you to jump and collect. Be careful of fireflies from below, as they can knock you off easily if you time a jump poorly.

Immediately after collecting the seventh bee, drop below and you’ll find some balance beams that go to the left and right. Head to the far left beam and a bee will spawn, floating up to the above clock mechanism. You can time your balance and jump to make it up to the platform above from this beam to allow you to reach it.

At the top of the clockwork section where you see the first ladder, you will be treated to a cutscene with three fiery dogs. Just after the cutscene finishes, move to the right and the bee will appear above Arthur and move to the left. Give chase, avoiding the large dogs, and grab the bee. Don’t bother attacking the dogs in this section as you will not defeat them in this section and they can slow you down for the final bee.

Further up on the platforms with the three fire dogs is a ladder that will take you to a flat section. Land on this little platform and a bee will appear above and right of Arthur. Be wary here, as all three of the fire dogs will start to dive into this area. If you collected the ninth bee quickly and rose up the ramps, you should have more margin for error if you knocked over. If you miss it and end up climbing the ladder, you will have to restart the level from scratch to get back to it, as you can’t go back from the arena at the top.